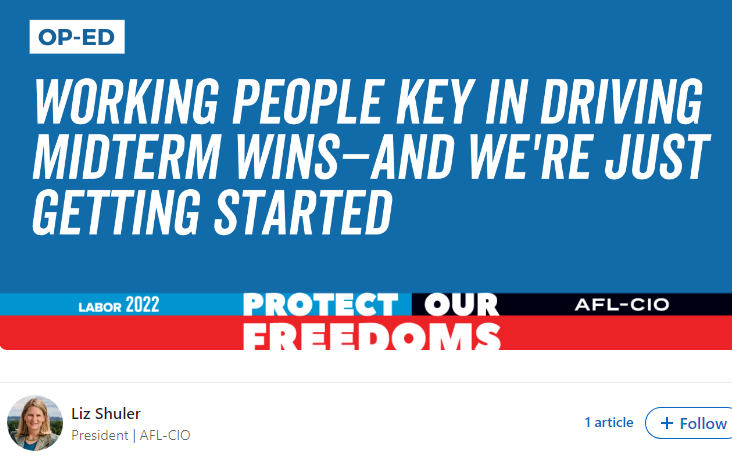 The pundits had it all figured out.

All the polling data and conventional wisdom pointed to a shift in power in both the House and the Senate.

A red wave was coming.

As we look at the Mid-Term Election results as they stand today, it’s clear that conventional wisdom was wrong.

As with any election, there’s no one explanation.

Abortion rights was a huge factor in the wake of Roe v. Wade being overturned.

Young people turned out and voted for Pro-Worker candidates by large margins.

But one key storyline that remains largely untold is the role Working People played in securing these victories - specifically, the role of Union Voters.

In State after State, Union Households provided critical votes that put Pro-Worker candidates over the top.

Our approach to politics is simple: Organize.

Cut through the noise with real conversations about the issues that matter.

As any Organizer knows, the key to good communication isn’t just what you say.

It’s how intently you listen.

And we got an earful.

Corporate profits are now at a 70-year high.

While Big Oil has had a run of record-breaking profits, such as Exxon’s $20 billion haul and Shell’s eye-popping $9.45 billion in the third quarter, Working People continued to pull up to the gas tank with a lump in their throats.

Any wage increases Workers have earned are eaten up by rising prices.

In those conversations, we heard over and over again, “Something doesn’t add up.”

Workers and their families know when they’re being hoodwinked.

Many didn’t yet know about the Biden Administration’s efforts to give Workers a boost through infrastructure jobs, student debt relief or prescription drug price cuts.

Over time, these conversations shifted to the stakes in this election.

To Continue Reading This Labor Perspective, Go To: www.linkedin.com/pulse/working-people-key-driving-midterm-winsand-were-just-getting-shuler/?trackingId=sD%2BhfRtIRQ57LjGaFRozTQ%3D%3D