In A âLandslideâ Victory, Workers At Columbus Museum Of Art Vote To âGo Unionâ With AFSCME 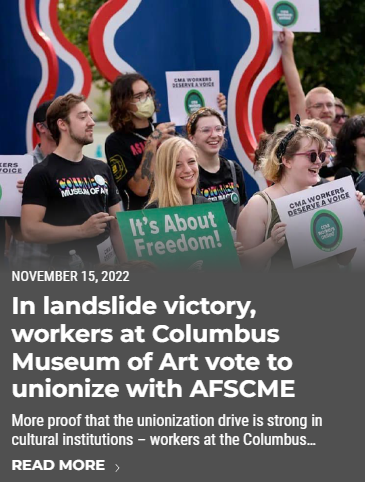 (COLUMBUS, OHIO) - In another indication that the Unionization Drive is strong in the Nation’s Cultural Sector, Workers at the Columbus Museum of Art (CMA) have decided to join hands to build power at work.

Workers initially sought voluntary recognition from the CMA, but were forced to vote in an election overseen by the National Labor Relations Board (NLRB) after the museum’s Trustees rejected the request.

The Workers began their Unionization effort with Council 8 and support from AFSCME Cultural Workers United - AFSCME’s Nationwide Organizing Initiative for Workers at museums, libraries, zoos and other cultural institutions.

The Columbus Museum Workers formed a Union a week after workers at the Utica Zoo and Croton Free Library in New York won their Union Elections.

Meanwhile, Workers at the Tacoma Museum of Art in Washington State and the Field Museum in Chicago are also seeking to Unionize.

In an open letter to colleagues, Workers at the CMA organized to address key issues, including job security, livable wages, safer working conditions and greater transparency from management.

The Workers also cited concerns over excessive workloads and mental health issues facing Employees that resulted from the COVID-19 Pandemic and the museum’s decision to cut its workforce by 30% in 2020.

“It’s been an overwhelmingly positive experience to be part of our Union Campaign and I know it's because the Columbus Museum of Art is an important part of this city’s community,” said RG Barton, a Visitor Engagement Floor Lead at CMA. “I built really strong relationships not just with my Co-Workers, but also the community who have stood with us throughout this process. We hope they will continue to stand with us as we begin negotiating our contract.”

CMA Workers United praised the many community supporters and political leaders who supported them throughout their organizing effort.

The group achieved Union Recognition less than two months after first announcing their intent to form a Union on August 29th.

Workers say they were “excited to move quickly and begin negotiating their first contract as soon as possible.”

To Read This Organizing Labor News Story In Its Entirety, Go To: https://afscme.org/blog/in-landslide-victory-workers-at-columbus-museum-of-art-vote-to-unionize-with-afscme