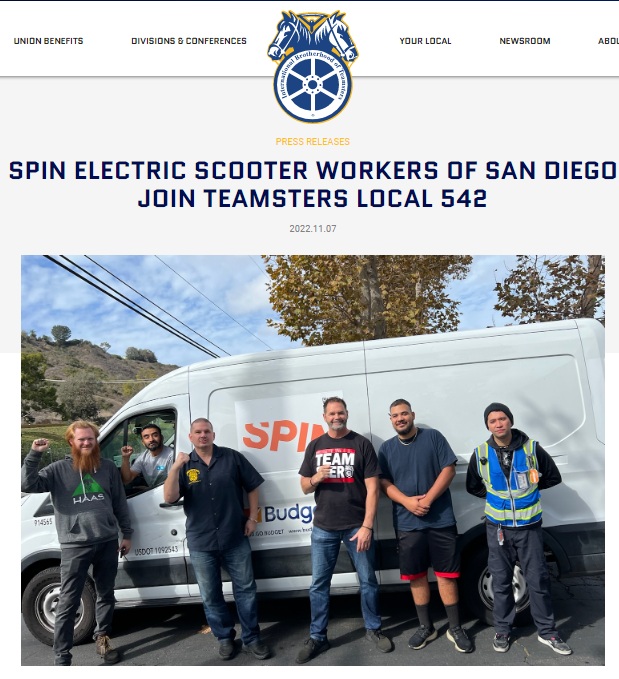 (SAN DIEGO, CALIFORNIA) – Operations Specialists, Maintenance Specialists, Shift Leads and Team Leads working for Spin Electric Scooters in San Diego have voted unanimously to join Teamsters Local 542 - the third City where Spin Workers have Unionized and the first outside of the Bay Area.

“These Workers spoke loud and clear with their unanimous vote to join the Teamsters,” Local 542 Secretary-Treasurer Jaime Vasquez said. “With the cost of living increasing throughout not just California, but the entire country, it is critical now more than ever that Tech Workers join forces with our Union to ensure that they can have the security, dignity and prosperity that they deserve.”

Spin Workers in Berkeley and San Francisco both joined Local 665 within the past two years, and the Local Union played an active role with the organizing drive in San Diego.

“Locals 542 and 665 worked tirelessly together to make sure that the Workers’ voices were heard,” Local 665 Secretary-Treasurer Tony Delorio said. “This is a successful milestone of our long-term project to Unionize not just Spin, but every E-Scooter Operator throughout the State.”

“We’re so happy to be a part of the Teamsters,” Shift Lead Christopher Clark said. “If Spin Workers can get a good contract in the San Francisco Bay, there’s no reason we can’t do the same thing down here.  We look forward to bargaining.”