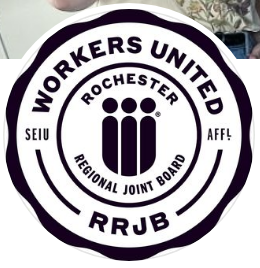 (BUFFALO, NEW YORK) - Workers employed at the Lexington Co-Op have announced they are organizing a Union at both of the Grocer’s Buffalo locations.

Lexington Co-Op Workers United had sent a letter to the Co-Op’s Board of Directors announcing the formation of their Organizing Committee and called on management to sign the Fair Election Principles and voluntarily recognize their union, Workers United Upstate New York.

“Decisions about the Co-Op are made collaboratively by management and Member-Owners, but Worker voices are conspicuously absent,” said Hunter Schwartz, a Worker at the Elmwood store.

“A Union is the best way to ensure that the project of the Co-Op reflects the needs of the whole community,” Schwartz said.

The Union Organizing Committee’s letter to management described the Workers’ reasons for seeking to Unionize: “We have taken this step as a means of protecting our dignity as Workers and of fulfilling the foundational values of the Co-Op by asserting our right to negotiate with our employer on an equal footing.  We believe the principles guiding the formation of our Union run directly parallel to the Co-Op’s vision of supporting a thriving, local, sustainable economy.”

The Fair Election Principles they are asking management to agree to lay out a framework for a fair Unionization process, free of threats, intimidation and unethical conduct.

“The Lexington Co-Op has a chance to do the right thing, sign the Fair Election Principles, and voluntarily recognize the Union,” said Gary Bonadonna, Junior of Workers United Upstate NY.

“Buffalo is a Union town - we don’t want a Co-Op that acts like Whole Foods and busts the Union like Jeff Bezos.  We want our Co-Op to live up to its own values and reflect ours by becoming truly co-operative with the Workers,” he said.

The workers had given management until Friday (November 11th) to recognize their Union.

In a statement, Lexington Co-Op management would not agree to do so, saying “the Co-Op strongly believes in the rights of Staff to participate in organizing activities, as well as their right to refrain from participating in organizing activities.  We believe that all staff should have an opportunity to decide whether they want to Unionize, as well as be informed with pertinent and accurate information to do so.”

In the meantime, the Lexington Co-Op Workers are asking the Buffalo Community to support the campaign by visiting the stores to wish the workers luck and request that owners call on the Board to voluntarily recognize the Union.