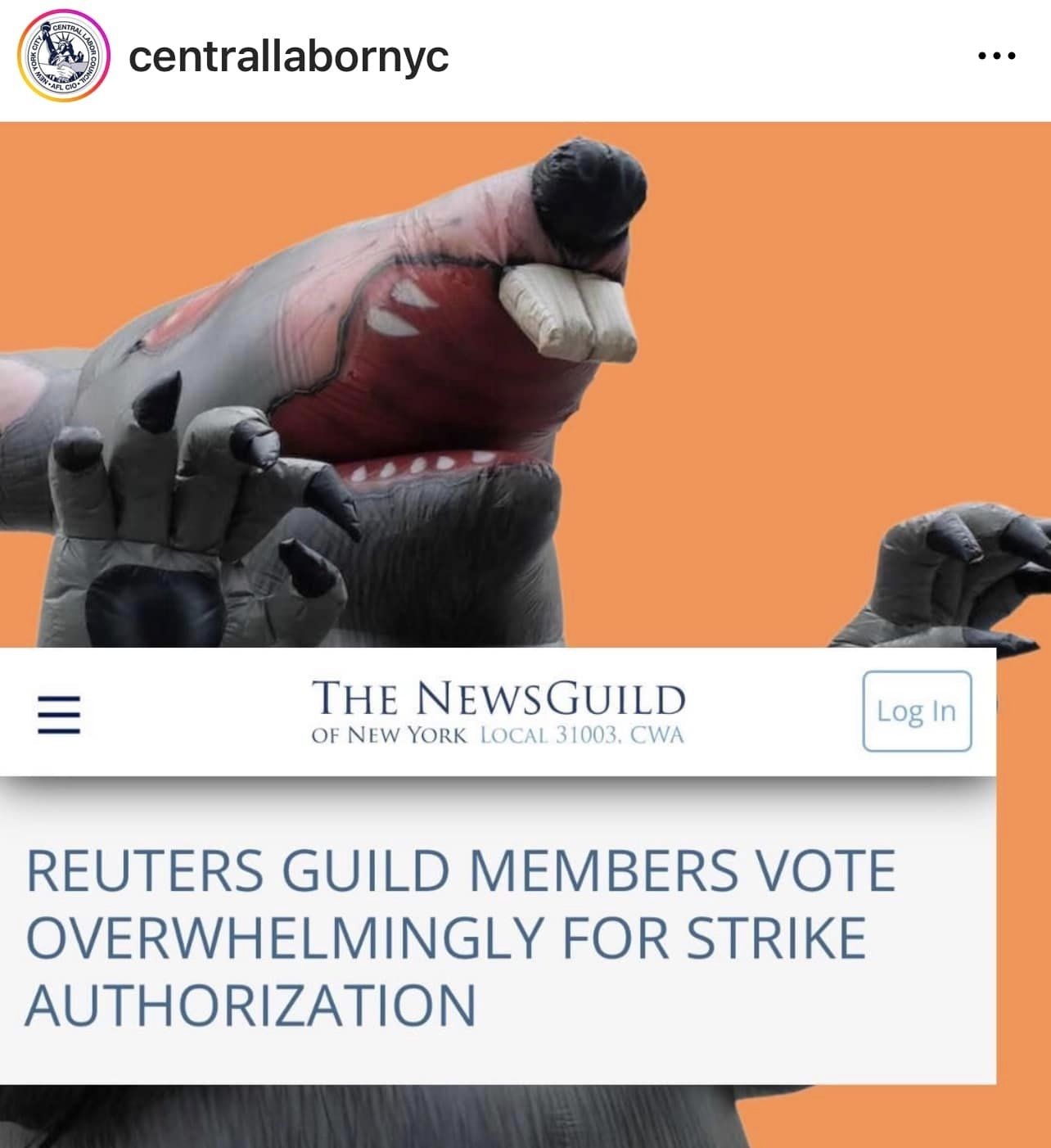 (NEW YORK CITY) - NewsGuild of New York Members at Thomson Reuters have announced a super-majority of Union Members voted in favor of authorizing their Bargaining Committee to call a Strike if their employer continues bargaining in bad faith.

The vote took place across two days - Thursday, November 3rd to Friday, November 4th - with 80% of the Bargaining Unit participating in the vote and 81% voting in favor of the Strike Authorization.

In August, the NewsGuild filed an Unfair Labor Practice (ULP) against Reuters for bad faith bargaining after the company repeatedly stalled out bargaining by failing to provide the Union with bargaining dates.

Additionally, the Bargaining Unit has gone two years without a wage increase during a period of high inflation, while Reuters has routinely reported high profits, Union Officials added.

The Thompson Family, which owns Thomson Reuters, is the richest family in Canada and their personal net worth increased by more than $8 billion over the past two years.

The Strike Authorization Vote empowers the Union’s Bargaining Committee to call a Strike if the employer continues to stall out bargaining in violation of Labor Law and if progress isn’t made in contract talks, which are set to resume on November 14th.

The Bargaining Committee will demand again at the upcoming bargaining session that the company schedule more dates to reach an agreement, NewsGuild Officials said.

“Our colleagues have given us a clear mandate to do what it takes to get a contract that reflects runaway inflation and the company’s multi-billion-dollar cash hoard.  So far, the company has dismissed the incredible amount of dedication we showed during the global pandemic and what we continue to do on a daily basis,” said Tim McLaughlin, Unit Chair, Reuters Guild.

In early August, 90% of the Unit took a one-day Strike across all U.S. Bureaus, the first at the company in over 30 years.

“Though Thomson Reuters is making huge profits during the pandemic, company reps repeatedly and begrudgingly come to negotiations with insultingly low offers, or in some instances no offers at all, for the very Workers who make those profits possible,” NewsGuild of New York President Susan DeCarava said.

“It is that kind of disrespect that has galvanized Guild Members at Reuters to take the momentous step of overwhelmingly voting in favor of authorizing their Bargaining Committee to call a Strike.  It’s time for Reuters management to bargain in good faith and come to the table with substantive proposals that recognize our Members’ contributions to the company’s bottom line,” DeCarava said.

To Directly Access This Labor News Story, Go To: www.nyguild.org/front-page-details/reuters-guild-members-vote-overwhelmingly-for-strike-authorization#:~:text=The%20vote%20took%20place%20across,favor%20of%20the%20strike%20authorization