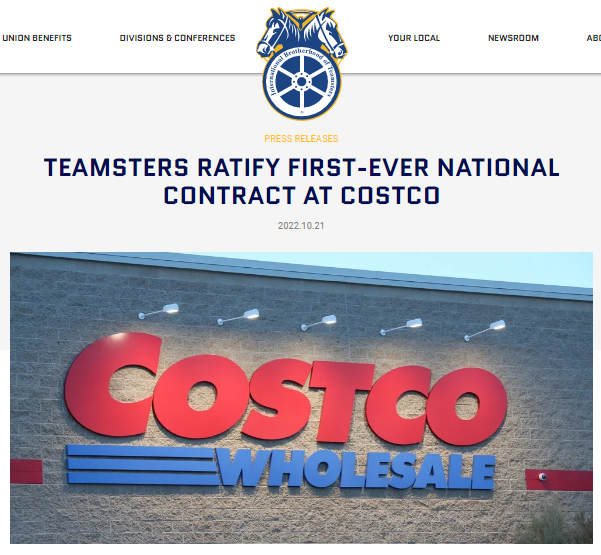 (PORTLAND, OREGON) - The Teamsters have made history, securing a new Master Agreement protecting more than 18,000 Workers at Costco nationwide.

Ballots were counted before an independent observer in Portland, Oregon and the agreement was overwhelmingly ratified by a vote of 72% with record-high voter turnout from the Membership.

“Don’t let anyone tell you the days of achieving National Master Agreements are over.  Unions can protect American Workers on a national scale - the Teamsters just proved it at Costco,” Teamsters General President Sean O’Brien said. “The Teamsters Union pulled off something that Anti-Labor Activists would have you believe is impossible.  Our massive network of local Unions and army of Organizers makes us the most powerful Union in the world and the most equipped to protect as many Workers as possible.  This is an earth-shaking win for Costco Workers and the American Labor Movement.  Corporations like Sysco, UPS and Amazon remain on notice.”

The National Agreement provides Members with significant wage improvements over the next three years and a substantial increase in pension contributions by the employer, the Union said.

The contract will also provide Members with higher semi-annual bonuses and a more flexible attendance policy, among other workplace improvements, the Union said.

In May, the Teamsters Costco National Negotiating Committee unanimously recommended a “no” vote against the company’s initial contract offer.

On June 21st, Costco Teamsters rejected the offer by an overwhelming vote of 93%, paving the way for the National Contract victory.

Throughout negotiations, Rank-and-File Members played an instrumental role in the bargaining process, attending talks and providing feedback for the National Negotiating Committee.

“Our Members at Costco stood up for their rights and won big,” Mike Bergen, who serves as Local 166 Secretary-Treasurer and Chair of the Teamsters Costco National Negotiating Committee, said. “They weren’t afraid to Strike - if necessary, and the company knew they weren’t bluffing.  This victory was for the Workers, by the Workers.”

The Teamsters represents 1.2 million Members throughout the United States, Canada and Puerto Rico.

To Read This Labor News Story In Its Entirety, Go To: https://teamster.org/2022/10/teamsters-ratify-first-ever-national-contract-at-costco/