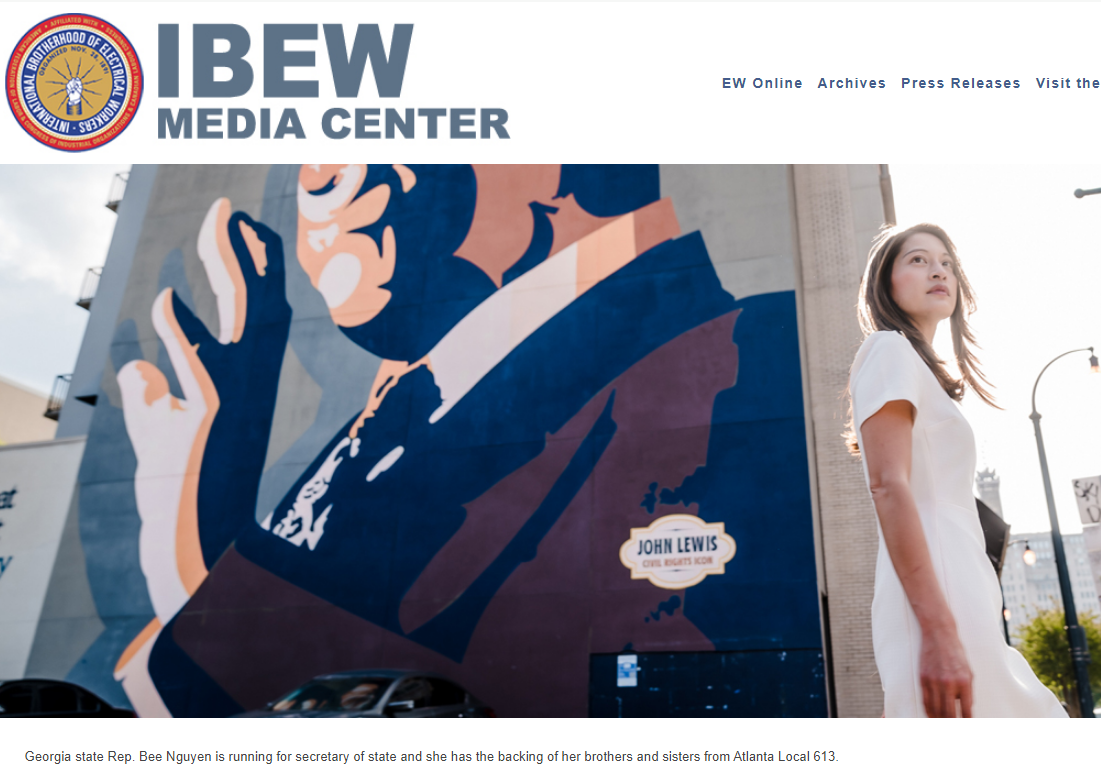 Bee Nguyen is many things.

She’s the daughter of Vietnamese Immigrants, the State Representative for Georgia’s 89th District, and, as she proudly touts in her campaign for Secretary of State, a card-carrying Member of Atlanta International Brotherhood of Electrical Workers (IBEW) Local 613.

“Bee is very intelligent and seasoned in politics,” Local 613 Business Manager Kenny Mullins said. “She is a strong and compelling candidate because she is genuine and she’s IBEW.  She cares about serving the people of Georgia.  It’s a calling for her, not a job.”

Nguyen’s background isn’t a typical one for an IBEW Member.

She doesn't come from a long line of Electricians or Tradespeople.

Her parents fled from Vietnam in search of basic Civil Liberties.

When her father first arrived in America, he worked as an Orderly at a mental institution making minimum wage - $3.35 an hour at the time.

At night, he would study in their basement apartment using a cardboard box as his desk.

For him, education was the only way to escape poverty.

Perhaps not surprisingly, Nguyen spent a lot of her career in the Education Sector.

She started a non-profit organization and she spent a decade in Georgia Public High Schools where she provided after school programming, wrap-around services and one-on-one mentoring.

“I saw the lack of investment in our public school system and it really helped to inform my decision to run for office,” Nguyen said.

It was after the disastrous Janus v. AFSCME Supreme Court decision in 2018 that Nguyen decided to become a Union Member.

Janus stripped Public Unions of funds and the power to fight for Workers the same way that states use Right-To-Work (for less) Laws to impede Private-Sector Organizing.

For Nguyen, it wasn’t something that she could just stand by and watch happen.

“I decided to put my money where my mouth is and find out how I could become a Union Member,” Nguyen said. “I had a good relationship with the IBEW from working on previous campaigns together, so I just went up to (Local 613 Political Registrar) James Williams and asked him how I could join.  About a month or two later I was sworn in and now I’m a dues-paying Member.”

Nguyen currently holds the state House seat formerly held by friend-of-the-IBEW Stacey Abrams, who is running for Governor for a second time this year.

But after seeing the barrage of voter suppression policies being enacted in Georgia, Nguyen - who is the first Asian-American Democratic Woman to hold elected office in the Georgia General Assembly, decided to run for Secretary of State.

If she wins, she would also be the State’s first Asian-American elected to a political statewide office.

“I’m running to make sure there’s a free and fair election for everyone,” Nguyen said. “Our democracy is healthier when every eligible person can participate without barriers.”

To Continue Reading This Labor News Report, Go To: www.ibew.org/media-center/Articles/22Daily/2211/221102_GeorgiaMember