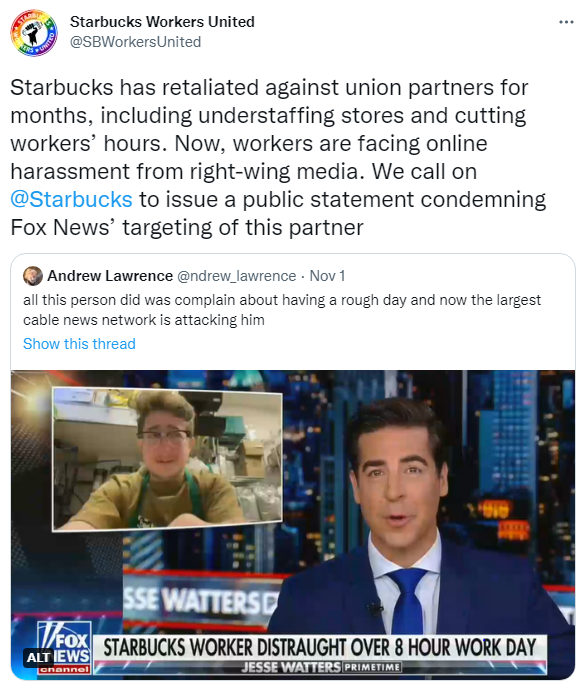 (BUFFALO, NEW YORK) - After posting a viral video on line advocating for better working conditions at Starbucks, a Union Worker was targeted by Fox News host Jesse Watters during his show.  After the segment aired, Starbucks Workers United says there was an explosion of on-line harassment - including threats of physical violence against the Worker, who had already been targeted by Starbucks’ Union-Busting Campaign.

As a result, Starbucks Workers United is calling on the company to condemn the network’s targeting of the Worker on Twitter, and issued the following statement:

Starbucks has retaliated against Union Partners for months, including understaffing and cutting Workers’ hours.

The Partner is a full-time college student who also works at Starbucks, in addition to leading the organizing and bargaining efforts in Ithaca.

Now, because of Jesse Watters and Fox News, he is being subjected to an onslaught of vile, transphobic online harassment, including threats of physical violence.

This Partner has been advocating for better working conditions for all Service Workers and ended up being targeted by the largest conservative media company in the country.

Nobody should be subjected to this for standing up for themselves and their Co-Workers.

Starbucks must condemn Jesse Watters’ and Fox News’ actions targeting this worker in the strongest possible terms and take steps to ensure the personal safety of all Ithaca Starbucks Workers.