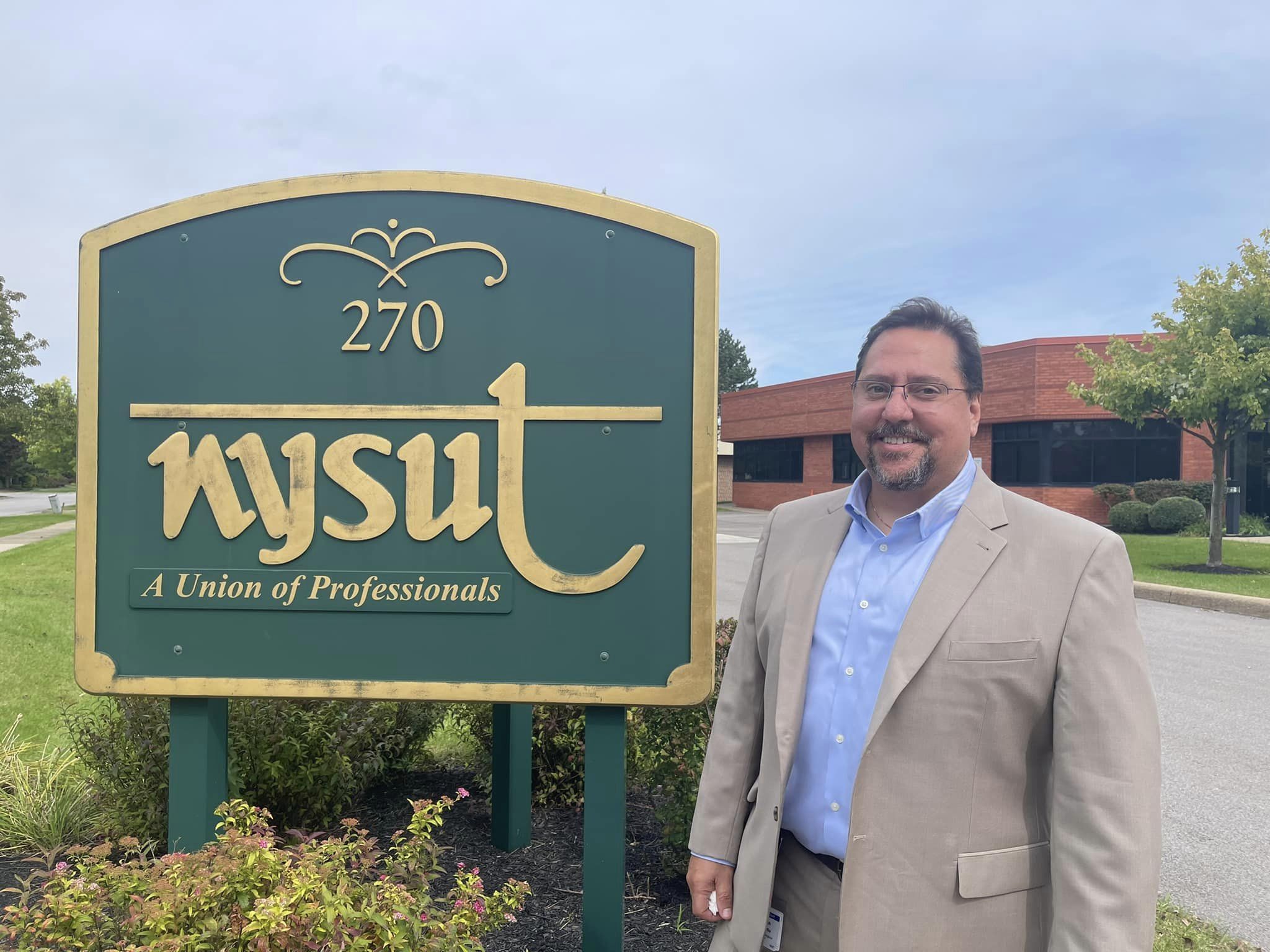 WNYLaborToday.com Editor’s Note: Pictured above, Joe Cantafio has been named New York State United Teachers’ (NYSUT) Regional Staff Director here in Western New York.  Cantafio, who is well-known across the area’s Labor Movement, previously served as President of the West Seneca Teachers Association.  He is also only a handful of Labor Leaders who have run - successfully, for public office over the years.  Cantafio presently serves on the West Seneca Town Council.  (WNYLaborToday.com Photos)

(WILLIAMSVILLE, NEW YORK) – With just a couple of years away from becoming “fully vested” after nearly 30 years working as a History Teacher at West Seneca High School and as a Football and Lacrosse Coach there - and as Union President of the West Seneca Teachers Association (WSTA), 52-year-old Joe Cantafio could have just ridden things out and sailed into retirement - and no one would have blamed him, but that’s just not in his Labor DNA.

Instead, Cantafio decided to take on yet another challenge at this point in his life and agreed to become the New York State United Teachers’ (NYSUT) Regional Staff Director, overseeing 45,000 Union-Represented Members who are spread out across 205 individual urban, suburban and rural School Districts, all located across eight Western New York Counties.

“It is an ‘honor to be in this role’ and it’s a ‘true’ calling,” Cantafio - who assumed the position in mid-August, matter-of-factly told WNYLaborToday.com during a recent sit-down interview in NYSUT’s Williamsville Headquarters.

“I ‘really didn’t feel I could do more’ (in his professional life).  I thought I would retire or continue to be involved in Labor, maybe in a non-profit, then this position became open.  ‘A void needed to be filled’ (with outgoing Western Region Director Mike Deely moving on to another position within NYSUT) and I thought: ‘If not you, then who?’  ‘So, I jumped right in,’” he said.

Cantafio is no stranger to NYSUT, nor is he to the Western New York Labor Movement.

In fact, his personal and professional history precedes him.

Cantafio graduated from West Seneca High School back in 1988 and went on to become a Union-represented High School History Teacher there for 25 years, as well as a Lacrosse and Football Coach for an overall total of around 30.

He also served as President of the 550-Member West Seneca Teachers Association (WSTA), which is affiliated with NYSUT, as well as being a Member of the National Education Association (NEA).  Cantafio has also served as a NYSUT At-Large Statewide Board of Directors and as a NEA New York State Delegate.

And if that wasn’t enough, Cantafio had served as a Vice President of the Western New York AFL-CIO Area Labor Federation (WNYALF). 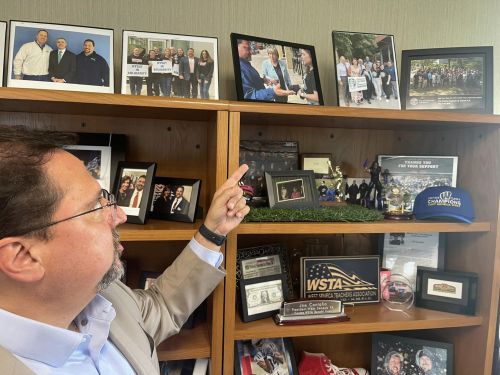 A couple of years back, he played a high-profile role, serving as the spokesman for Organized Labor’s fight to keep the New Era Cap Company’s Town of Evans Sports Cap Manufacturing Plant open in an effort to save the jobs of more than 200 Union-represented Workers.

And his commitment to the West Seneca and Western New York Community hasn’t stopped there - successfully running as a “Union Man” to capture a seat on the West Seneca Town Board back in 2019.

While campaigning, Cantafio - whose father was a 40-year United Auto Worker (UAW) Member, says his reply to those who asked if he was a Union Guy was:  “They ‘never ask you if you’re a business guy.’  I’m ‘not running as a Union Guy.’  ‘I’m a Union Man.’  ‘It’s Unions that have built this country.’”

In fact, Cantafio says he was told that a “Union Leader would never get elected.”

“And they said an Italian had never been elected (to public office) in the Town’s history,” he added.

“I ‘didn’t put my Union Flag away’ and I ‘didn’t back away’ (from the questions voters asked about his allegiance to Unions).  I got GOP backing (in his race) ‘and now I work with all’ (Democrats, Republicans, Independents and Conservatives),” he said.

Cantafio’s latest term on the Town Board runs through December 2023.

And if that wasn’t enough, Cantafio has also given of himself by volunteering and playing a major role in several local cancer fundraising efforts, including Unions Against Cancer and Breast Cancer Awareness, which has impacted several Co-Workers and friends.

He is also a Real Man Who Wears Pink.

Cantafio was asked to participate in the 2017-2018 National Real Men Wear Pink Drive to raise awareness and dollars to fight breast cancer. 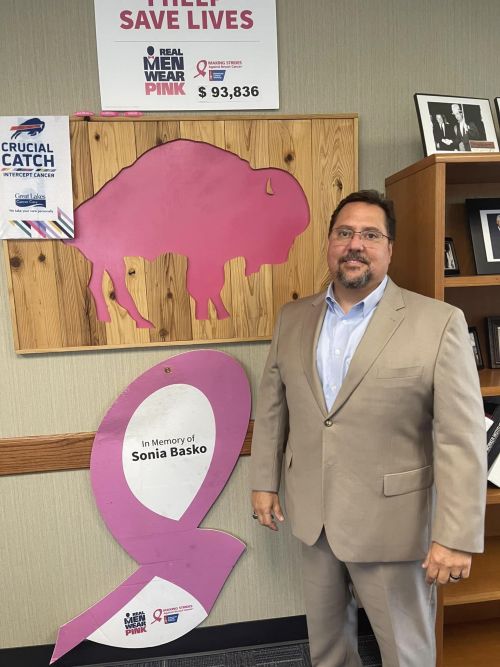 “Overwhelmed” by the outpouring of support from Organized Labor, Cantafio was able to help raise more than $60,000 - a total that was the most tabulated in New York State and 15th overall in the entire country.

This ‘is what Labor does,’” Cantafio told WNYLaborToday.com at the time.  “There are ‘so many Union Members doing good things.’  They ‘really show the heart of Labor.’  But (cancer), ‘sadly, also impacts Western New York and those in the Labor Movement too.’”

(WNYLaborToday.com Editor’s Note: For More, Read: “This Is What Labor Does:” WNY AFL-CIO Area Labor Fed Puts Its ‘Stamp Of Approval’ On ‘Unions Against Cancer’ - Unique Fundraising Drive Championed By NYSUT’s Joe Cantafio Hopes To Raise Thousands Of Dollars At www.wnylabortoday.com/news/2019/04/24/buffalo-and-western-new-york-labor-news/this-is-what-labor-does-wny-afl-cio-area-labor-fed-puts-its-stamp-of-approval-on-unions-against-cancer-unique-fundraising-drive-championed-by-nysut-s-joe-cantafio-hopes-to-raise-thousands-of-dollars/)

Cantafio is most proud of this three sons (Paul, John and Dan) and wife, Karen – whom he described as a “miracle” after surviving an aneurysm “and being in a coma for weeks.”

“She’s ‘a rock,’” he said (Pictured Below With His Family/Photo Courtesy of Joe Cantafio). 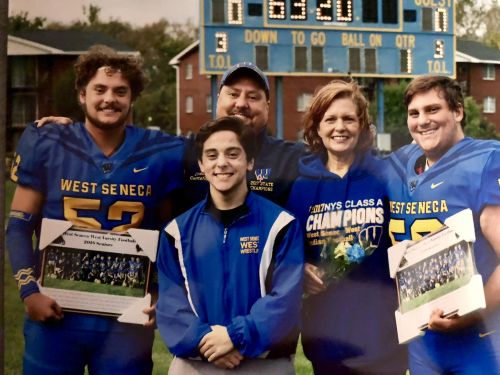 Meanwhile - Cantafio’s Labor roots can be traced back to his family, and Father - who was diehard UAW (United Auto Workers) Guy, so much so that he said as a young child he learned the words to the song Solidarity Forever “even before we learned how to sing happy birthday.”

“‘And, I thought strikes were fun,’” added Cantafio, who walked many a picket line with his Dad.

Now, Cantafio oversees a Regional Staff of nearly 50, a group, he says “is a ‘great pool of experience and depth’ - ‘the best’ (NYSUT) Office in (New York) State.”

“I’ve told the Staff that ‘if I do my job, our Members will see no difference’ (with the change of leadership).  Mike (Deely) kept me involved (over the years, including agreeing to manage his initial campaign run for the West Seneca Town Council) ‘and I know a lot of the players’ (in the Western New York Union Movement).  As an ‘old Coach, I know you have to have (good) people in place.’  ‘All you have to do is coach them.’  ‘I’ll help everyone develop and look to develop younger Labor Leaders’ (to assume control as others either move on or retire).  ‘They will be the face of NYSUT and become Labor Leaders in their communities.’”

Joe is a great guy and a great leader. He became an honorary BTF Member many years ago when he headed the Buffalo Believes Campaign in which Teachers talked to residents about Buffalo schools, parents' concerns and Teachers. From that point on, everywhere the BTF went, you'd find Joe. He walked picket lines with us and was the first to support and encourage many of us seeking leadership roles in NYSUT. I can't think of a better person for this position. Joe is going to do great things and I can't wait to watch them unfold. Posted by Chris Salamone on October 28, 2022 at 12:56 pm
So proud of you Joe. You are truly a great role model for the next generation . You are the definition of a leader. Posted by Joe Guadagno on October 26, 2022 at 5:26 pm