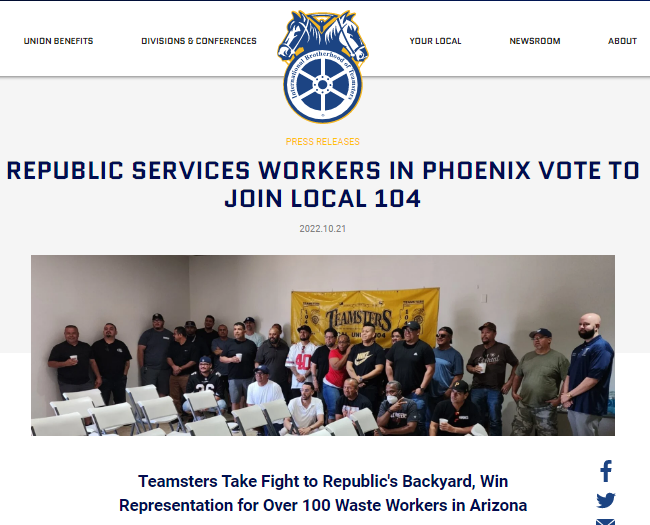 (PHOENIX, ARIZONA) – Teamsters Local 104 has announced 113 Waste Workers employed at Republic Services in Phoenix have voted to Unionize with the Teamsters in order to address years of concerns on the job as they seek higher pay, affordable health care and better working conditions.

“For too long, we have been underpaid, overworked and definitely under-appreciated,” said Lance Higgins, a Residential Driver at Republic Services Phoenix. “We were fed up with the company’s ‘our-way-or-the-highway’ mentality.  We were overdue for a change and we knew the Teamsters would give us the power and resources to win the improvements we have long needed on the job.”

Workers stood strong to gain representation with the Teamsters.

Despite a nasty Union-Busting effort by the company, Higgins and his Co-Workers stayed united in their campaign to win a voice on the job and to put an end to inadequate wages and expensive health care.

“It’s a disgrace that Republic treats Employees in their very own backyard with such disrespect. It’s just one more reason why Republic Workers everywhere ‘need a Union voice on the job,”’ said Chuck Stiles, who serves as Director of the Teamsters Solid Waste and Recycling Division.

“I want to thank Republic Workers for sticking together and taking control of their future.  Now, we will take our fight to the negotiating table for a strong first contract,” Stiles said.

Headquartered in Phoenix, Republic Services is the second-largest trash collection and landfill company in America.

To Directly Access This Labor News Story, Go To: https://teamster.org/2022/10/republic-services-workers-in-phoenix-vote-to-join-local-104/