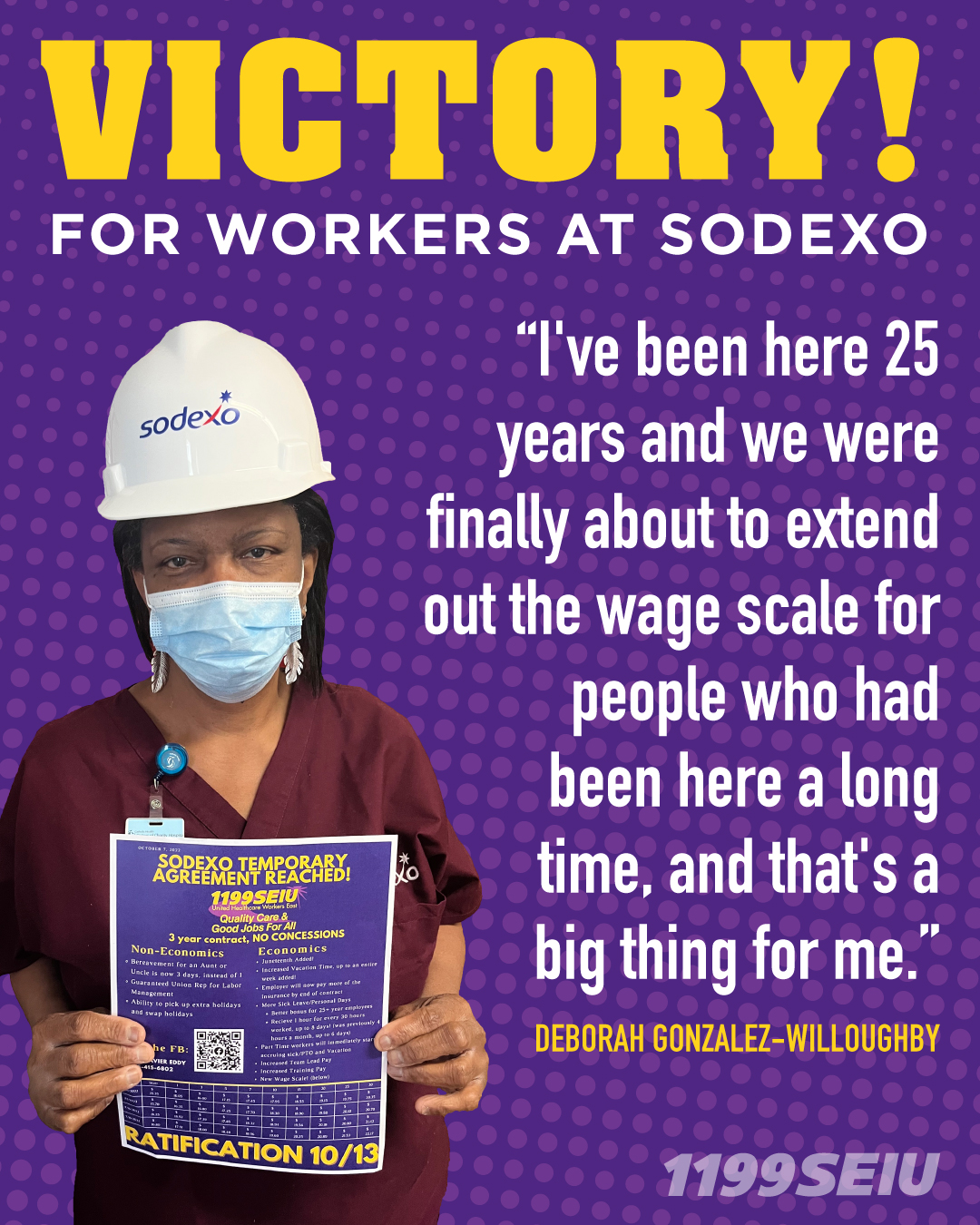 The Union Members are subcontracted by the Catholic Health System and work at Sisters of Charity Hospital in Buffalo, 1199 SEIU Administrative Organizer Xavier Eddy said.  They are employed in the hospital’s Environmental Services/Janitorial Department.

Asked what the reaction of the Workers was to the new agreement, Eddy said: “The ‘best reward is to have (a Member) look at (the contract), smile and say: Alright.’  (1199 SEIU) ‘gave up nothing (at the bargaining table) and we got a hell of lot.’  These are ‘Working Class Heroes’ who worked through (the) COVID (Pandemic).  ‘The vote was unanimous and they are pleased.’”

Among the economic improvements included in the contract are: Juneteenth added as a Paid Holiday; Increased vacation time, up to an entire week added; Sodexo agreed to pay more of Member insurance by the end of the agreement; Additional Sick Leave/Personal Days; A better bonus for 25-plus-year workers (Who will now receive one hour for every 30 hours worked, up to eight days - it was previously four hours a month, up to six days); Part-Time Workers will immediately start accruing Sick/Personal Time Off and vacation; Increased Team Lead Pay; and Increased Training Pay.

Non-economic gains for Workers in the new contract included: Bereavement for an Aunt or Uncle, three days, up from one; Guaranteed Union Representation on a Labor-Management Committee; and the Ability to pick up extra holidays and swap those holidays.

In addition, those Workers with high levels of seniority will see their hourly rate go higher than that.

For example, a Worker with 20 years of experience will see their hourly rate increase to $19.15.

The previous contract expired in mid-July and the 1199 SEIU-represented Workers were “geared up to fight,” Eddy said.

“‘They were willing to do anything,’” he added.

However, management relented at the bargaining table and Eddy said it was appropriate to give management “credit” for its stance, ultimately agreeing to provide the Workers “what they deserved.”