âWeâve Been A Voice For Justice And Equity And It Is Important For UUP To Be At The Forefront (Of This Effort)â - United University Professions Hosts National Mental Health Roundtable Event In Buffalo, âCommits To Help Bring About Needed Changeâ 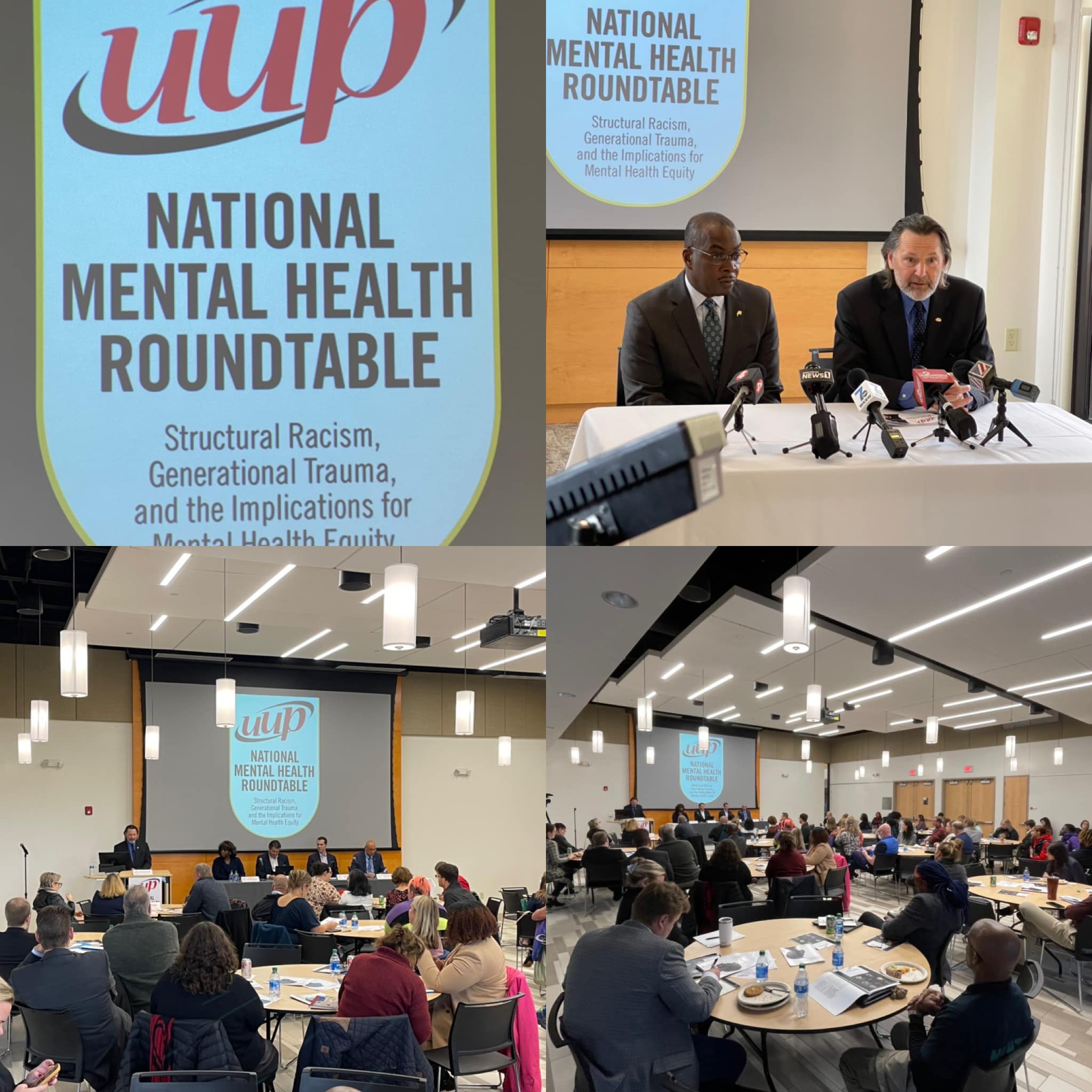 WNYLaborToday.com Editor’s Note: On Wednesday (October 19th), United University Professions (UUP) hosted a National Health Roundtable on the Buffalo State College Campus, a member of the State University of New York (SUNY) System.  UUP President Frederick Kowal, who was joined by Buffalo Mayor Byron Brown and a distinguished panel of experts, told WNYLaborToday.com his Statewide Higher Education Union “was committed to being a voice for justice and equity” and playing a role in helping eradicate the problems associated with structural racism, generational trauma and mental health equity.  (WNYLaborToday.com Photos)

(BUFFALO, NEW YORK) -  United University Professions (UUP) President Frederick Kowal, who heads the Nation’s largest Higher Education Union, did not hesitate when asked by WNYLaborToday.com why his Labor Organization had taken the lead and stepped forward to host a National Mental Health Roundtable in Buffalo, which took a deep dive into structural racism, generational trauma and the implications for mental health equity. 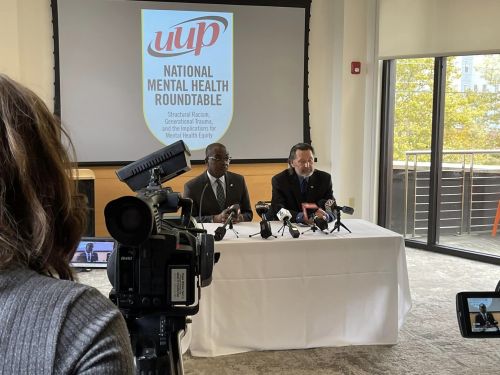 “‘Let me be blunt,’” continued Kowal, seated next to Buffalo Mayor Byron Brown (pictured above on the right) at a news conference that was held just before the mental health roundtable, which took place on the Buffalo State College Campus.  “Unions ‘historically (have had problems) with racism.’  In (UUP’s) fifty-year history, ‘we have been a voice for justice and equity and it is important for UUP to be at the forefront (of this effort).’  ‘And we just won’t make statements.’  ‘We will listen and learn and commit - and we will not waver.’”

The roundtable event came about in response to the May 14th murder of 10 people and the wounding of three others by a white supremacist at a supermarket located on Buffalo’s predominately Black East Side.

The horrific hate crime has left many who live in the community, as well as many across the entire region, to deal with an array of emotional scars and the reality that for racism to be brought to an end - all must be involved, including Labor Unions and their Members.

“We ‘have problems in our Communities of Color and the question is: How do we tackle this problem,’” Kowal said.  “It is UUP’s ‘intention to propose legislation that we will introduce to Mayors and Community Leaders where we can (better) utilize our (Mental Health) Professionals.’  Mayor (Brown) ‘is committed making sure we clear this City of racism and with SUNY (physically) in sixty-four counties in New York State, we can expand (existing) clinics and services (to many localities).’  ‘We can make New York a leader’ (in the battle against racism and offering the best in mental health treatment and equality).” 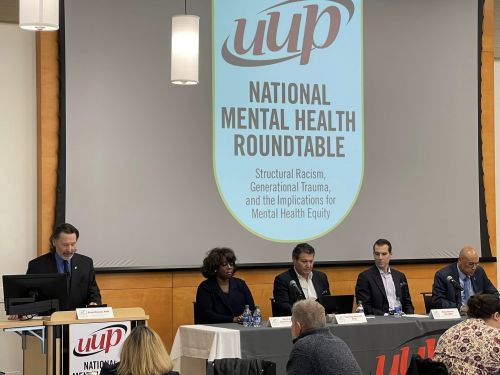 Mayor Brown, himself a Member of UUP and a graduate of Buffalo State, agreed - saying the Buffalo Community is still dealing with “all kinds of trauma” that resulted from the May 14th shooting: “‘I am thankful that UUP is holding this roundtable to discuss such critically important (issues).’  ‘There must be equity in the health care system and it needs to take place in order to improve mental health access and treatment.’  ‘We need to focus on what is needed.’”

Speaking to those who attended the roundtable - including UUP Buffalo State Union Chapter President Fred Floss, Kowal said the event was not a “one-off,” but an effort to “reach out to learn more,” as well as “address the issues the Black Community faces.” 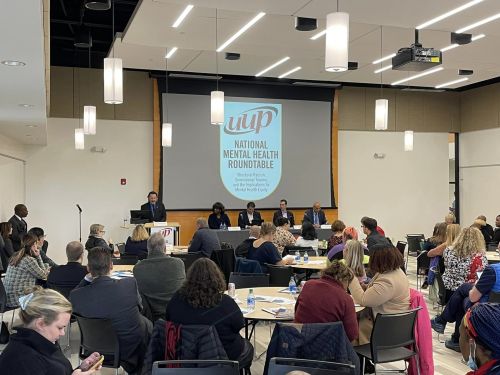 “‘We want the in-put of the Community and UUP will become even more engage to make mental health a priority,’” he said.  “‘SUNY can become a national leader (preparing the next wave) of Mental Health Care Professionals, who can begin to care for those in our communities.’”

In his welcoming remarks to the audience before the start of the roundtable, Mayor Brown said: “We are at a ‘pivotal’ moment.  ‘We (are recovering) from one of the most painful events that touched the lives of ten whose lives were taken and the wounding of three others.’  The (shooter) ‘targeted our’ City.  ‘He wanted to kill as many Black People as possible.’  ‘Crime, (racial) separation and generational poverty made Buffalo a target’ for the shooter.  ‘This has not only had a deep impact on Black Children, but children of all’ backgrounds.  ‘They are afraid to go to school.’  ‘Afraid to leave their homes.’  ‘That’s why we have to give voice to those who have been impacted and address mental health issues.’  ‘And that’s why I appreciate all that you do to make a difference in the lives of our community.’” 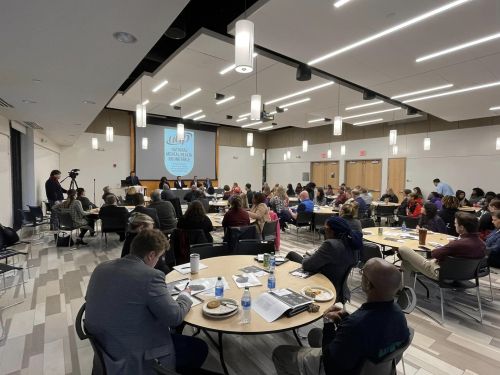 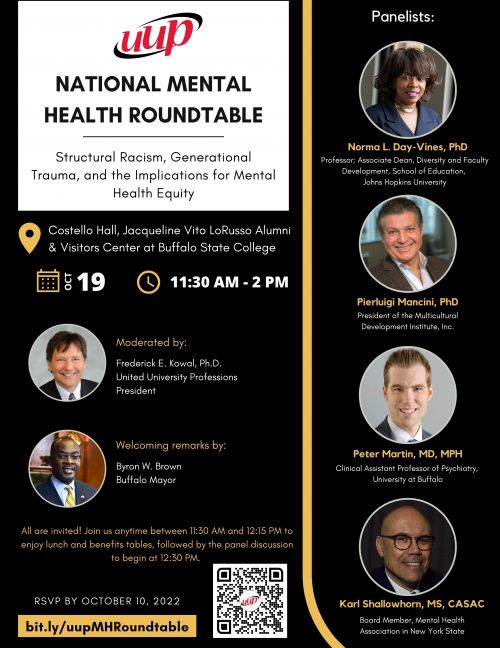