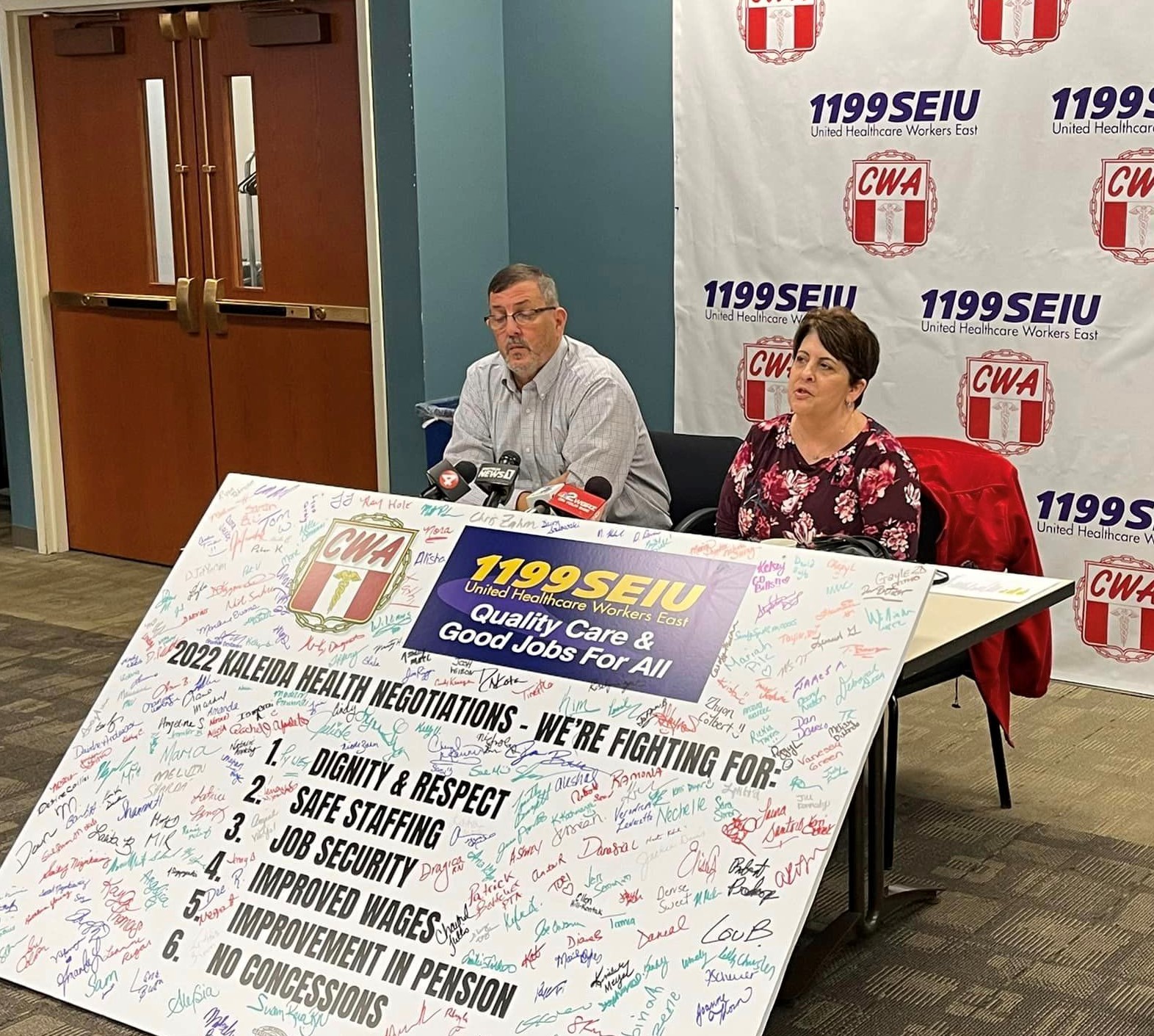 (BUFFALO, NEW YORK) – The exhaustion showed in the faces of Cori Gambini and Jim Scordato as they presided over a news conference to discuss specifics of a newly-ratified three-year agreement between the Communications Workers of America (CWA) Local 1168 and 1199 Service Employees International Union (SEIU) and the Kaleida Health System in Buffalo, but not when they showed their pride in the two Unions negotiating a described historic health care contract that will benefit their combined 6,300 Membership who are employed at Kaleida.

“‘This is the best Labor contract in (the history) of Western New York,’” said a proud Scordato (Pictured Above, On The Left/WNYLaborToday.com Photo), who serves as 1199 SEIU’s Vice-President for WNY Hospitals, said.  “We’ve been bargaining since March and there are ‘a lot of positive changes’ (in the new contract).  ‘We have work to do.’”

“I’m ‘exhausted, but happy - and our Members are happy,’” said Gambini (Pictured Above, On The Right/WNYLaborToday.com Photo), who serves as President of CWA Local 1168.  “We ‘solidified’ staffing ratios and there’s a ‘pension increase.’  ‘Some people are going to be seeing a raise of ($4 to $5 an hour).’”

In a major victory towards solving Kaleida’s staffing crisis, CWA and 1199 SEIU secured the addition of 500 full-time equivalent positions, both clinical and non-clinical, along with improved incentives for all open shifts - with automatic bonus on any open weekend shift.

In addition, the contract features Staffing Incentive Bonuses that will range from $15 to $30 per hour, depending on job title.

Per the contract, health insurance for newly hired Employees starts after 30 days.

Kaleida will also create two new Unionized positions in order to oversee Safe Staffing Ratios and ensure they are adhered to, and to facilitate the improvement of working conditions within its hospitals, it was also announced.

Over the next three years, all Union Members will receive a compounded minimum 12% general wage increase, as well as increases to pensions based on years of service.

Notably, the Unions’ Bargaining Committee made no concessions.

Even when Kaleida demanded changes and cuts to their Workers’ health insurance coverage, the Committee pushed to protect the Union Members’ and prioritize patient care, the Union Representatives said.

Now their job will be two-fold: Further educate CWA and 1199 SEIU Members - including a number who voted against contract ratification, on specifically what is in the contract and how it not only positively impacts them, but how it changes their workplace; and begin to work with Kaleida to retain and recruit new personnel, especially in light of the fact the contract calls for the creation of 500 new jobs.

“‘We have to figure out how to recruit, especially Registered Nurses,” Gambini, a Registered Nurse herself, said.  “‘It’s always important to build a relationship with the employer and - hopefully, we will build a professional relationship (with Kaleida).’  Our ‘goals are same - we both want to take care of our patients.’”

Added Scordato: “Kaleida spent ($100 million) on Travel Staff last year ‘and we both agree that money needs to be spent on its current Employees.’  ‘We’ll need to keep people’s feet to the fire’ (when it comes to maintaining Nurse-to-Patient Staffing Ratios), which will go from one-to-as many as thirty to one to six or eight.  And Kaleida too ‘wants to be the best.’  With ‘new’ leadership there, Kaleida’s ‘on the right path.’”

It was not lost that a huge turnout at an informational picket held outside the Downtown Medical Centers played a key role in getting the contract done, especially since CWA and 1199 SEIU Members voted by a 96% margin to approve a Strike Authorization Vote.

“The Strike Vote ‘was huge,’” Gambini said, “as was the informational picket and the help we received from our elected officials, ‘who were watching the situation closely.’  ‘But we still need to do a lot of education and we’ll do a deep dive’ (to learn why those Members who voted against the contract did so).  We’ll meet with them ‘to learn why they were unhappy.’”

“It’s ‘always a process and you’re always going to have a pocket of Members who aren’t happy,’” Scordato added, “We had a team of fifty (on the Bargaining Unit), ‘went live on’ Facebook and had (virtual) Town Hall meeting ‘where thousands of our Members took part in.’  ‘That was huge too.’  Questions were asked ‘and we scanned every document and made it available to our Members.’  ‘But there is always room for improvement - that’s our job to improve the lives of our Members and their families.’” 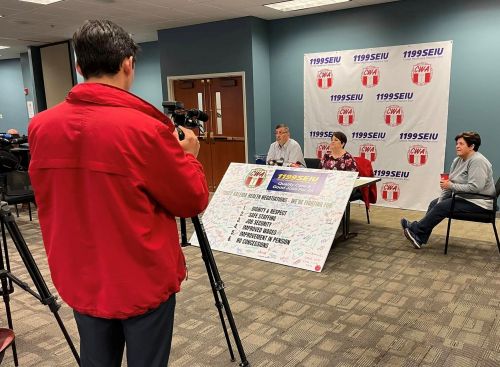 With CWA Regional Director Deb Hayes (Pictured Above On The Far Right/WNYLaborToday.com Photo), who participated in the contract negotiations, sitting off the side at the news conference- looking as she was enjoying what she was listening to, Scordato added: “It was ‘great to see the CWA and 1199 SEIU Political Teams working together and we look to see it continuing to happen as we go forth.’  And Kaleida ‘made it a point to thank us for the work we did politically’ (to help raise State Funding to help the Kaleida System, which continues to grapple with the after-effects of the Coronavirus Pandemic).”