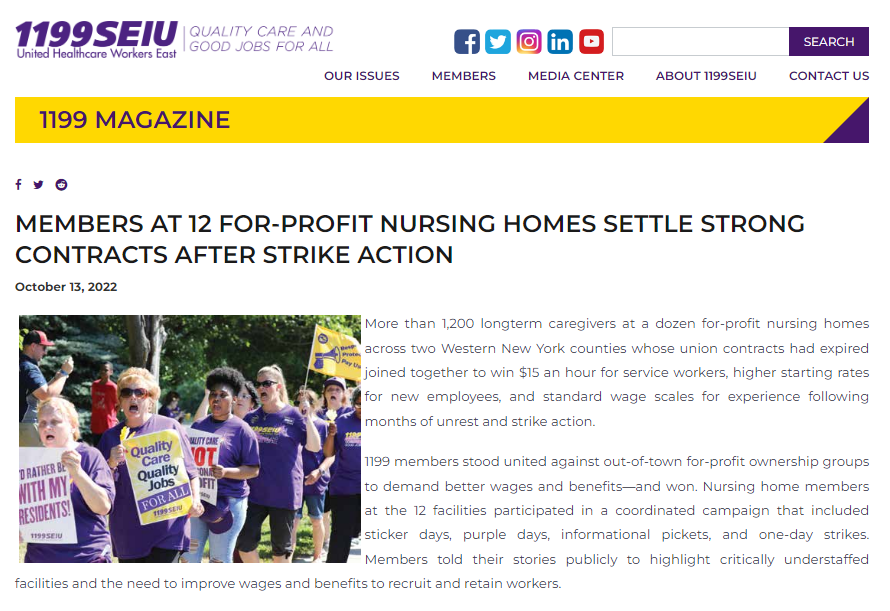 The Nursing Home Workers at the 12 facilities participated in a coordinated campaign that included sticker days, purple days, informational pickets, and one-day strikes.

Members told their stories publicly to highlight critically understaffed facilities and the need to improve wages and benefits to recruit and retain Workers.

“It was a long battle, but we came out victorious,” said Lori Beeman, who’s employed as a Housekeeper at Fiddler’s Green Manor in Springville, located in Southern Erie County.

“These raises will have a big impact on my fellow Union Members.  The new start rates for service of ($14.50), and going to ($15) in May, is a great win - the new start rates will help improve staffing and help provide the care our residents deserve,” she said.

“We’re thankful to have settled this contract and get our Members up to par so we can start hiring new Employees," said April Stonebraker, a Licensed Practical Nurses (LPN) employed at Elderwood in Lockport in Niagara County. “We still have some work to do, but this contract is a start to fight for staffing and an upward growth in wages and limiting agency use.”

"It's a new day in the health care workplace and these contracts are the first step to recognizing and realizing how important we are," said James Funderburk, a Housekeeper employed at Elderwood in the Buffalo Suburb of Amherst.

“I’m glad to finally be recognized for my seven years of dedication to Seneca Health Care (located in West Seneca in Erie County) with these new wages,” added Dietary Aide Joseph Grotky said. “I’m hopeful we’ll see less turnover and better care for residents. This is the best contract I’ve ever seen.”

To Directly Access This Labor News Story, Go To: www.1199seiu.org//magazine/members-12-profit-nursing-homes-settle-strong-contracts-after-strike-action