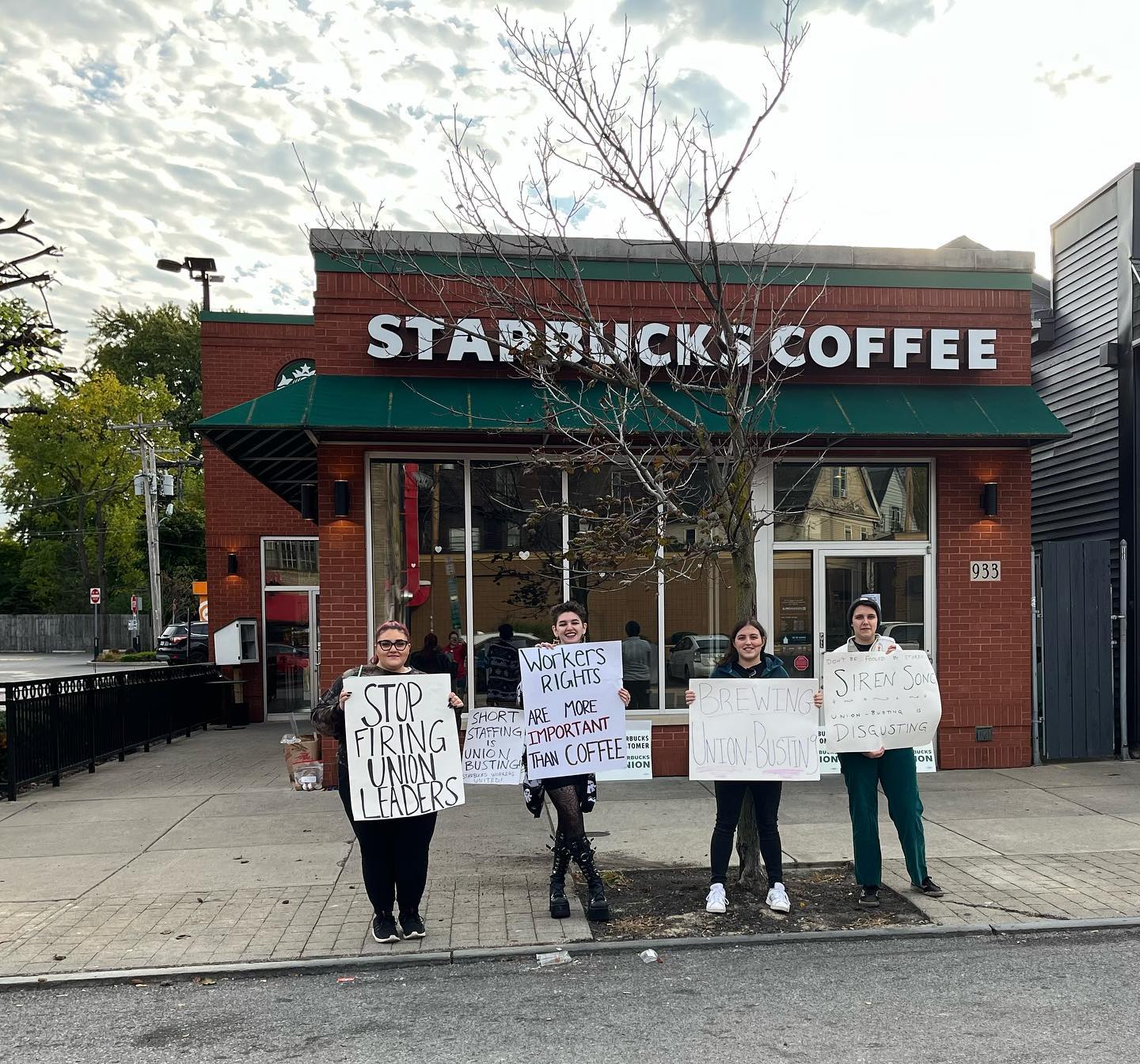 Since the weekend, five Workers have been unfairly disciplined by the Coffee Giant, Union Officials charge.

“The Elwood Partners are being held accountable for not following Starbucks policies that are continuously violated by stores in the surrounding area.  Yet, the other Starbucks Partners have not been coached properly and or written up for the same violations.  To give the first Union store multiple write ups one day after the other is blatant discrimination and evidence of retaliation,” Elmwood Partners wrote in their Strike letter to the company.

Since the Elmwood Partners voted to become the first Unionized Starbucks store in the United States last December, Starbucks has been on a campaign to crush the Union effort, StarbucksWorkersUnited said.

From changing Elmwood store hours to opening at an “absurd” hour, to purposefully short-staffing the store, to unfairly disciplining and firing Workers, Starbucks management is doing everything they can to demoralize Workers, the Union charged.

Region 3 of the National Labor Relations Board (NLRB) has investigated the company and issued formal complaints charging Starbucks with more than 200 violations of Federal Labor Law - one of the largest complaints ever issued by the NLRB.

Meanwhile, the Union says - in a brazen move, Starbucks fired William Westlake, a Barista employed at Starbucks’ store on Camp Road, located just outside Buffalo in Hamburg, for wearing a suicide awareness pin to work.

Westlake started wearing a pin made by the American Foundation for Suicide Prevention (AFSP) organization to work to remember and commemorate one of his Co-Workers who died from suicide, the Union said.

This Co-Worker was one of the original signers of the letter to former Starbucks CEO Kevin Johnson announcing Buffalo Workers’ intention to Unionize.

Before signing the letter, William’s Co-Worker was set to transfer stores for college.

After signing the letter, Starbucks revoked her transfer in retaliation, the Union said.

When asked if she could return to William’s store, she was told she was "under-trained" and kept out of the store until after the Union Election was over.

She eventually was able to return to her job at the Camp Road store, but died two weeks later.

“To say the company didn't handle this well would be an understatement, apart from banning pins from AFSP being worn as part of a new enforcement of policy, the company also refused to close on the day of the funeral.  A funeral they sent at least five managers to,” Westlake said.

“Baristas reported to work shortly after the service had ended, still wearing their black gowns, and one had a panic attack in the back room.  At the same time, one of our managers who had attended the funeral went straight to another store to fire another Buffalo Union Leader, Angel Krempa, in part for wearing a suicide awareness pin,” Westlake said.

Starbucks management sent Westlake home from his scheduled shifts when he would attempt to wear the pin on his apron, the Union said.

As a result, Westlake has not been allowed to work a shift at his store for nearly four months, the Union said.

A Tik Tok video of Westlake sharing the story of his firings has reached more than one million views on the video-sharing App, with thousands of comments by Starbucks customers expressing their outrage over the termination.