ââThis Is Like Walking On Mars - Itâs Pricelessââ - High School Social Worker âRaves Aboutâ WNY Construction Career Days, Says: ââWe Can Talk To Them About It, How Cool A Job These Are, But You Canât Replicate Thisââ Hands-On Experience 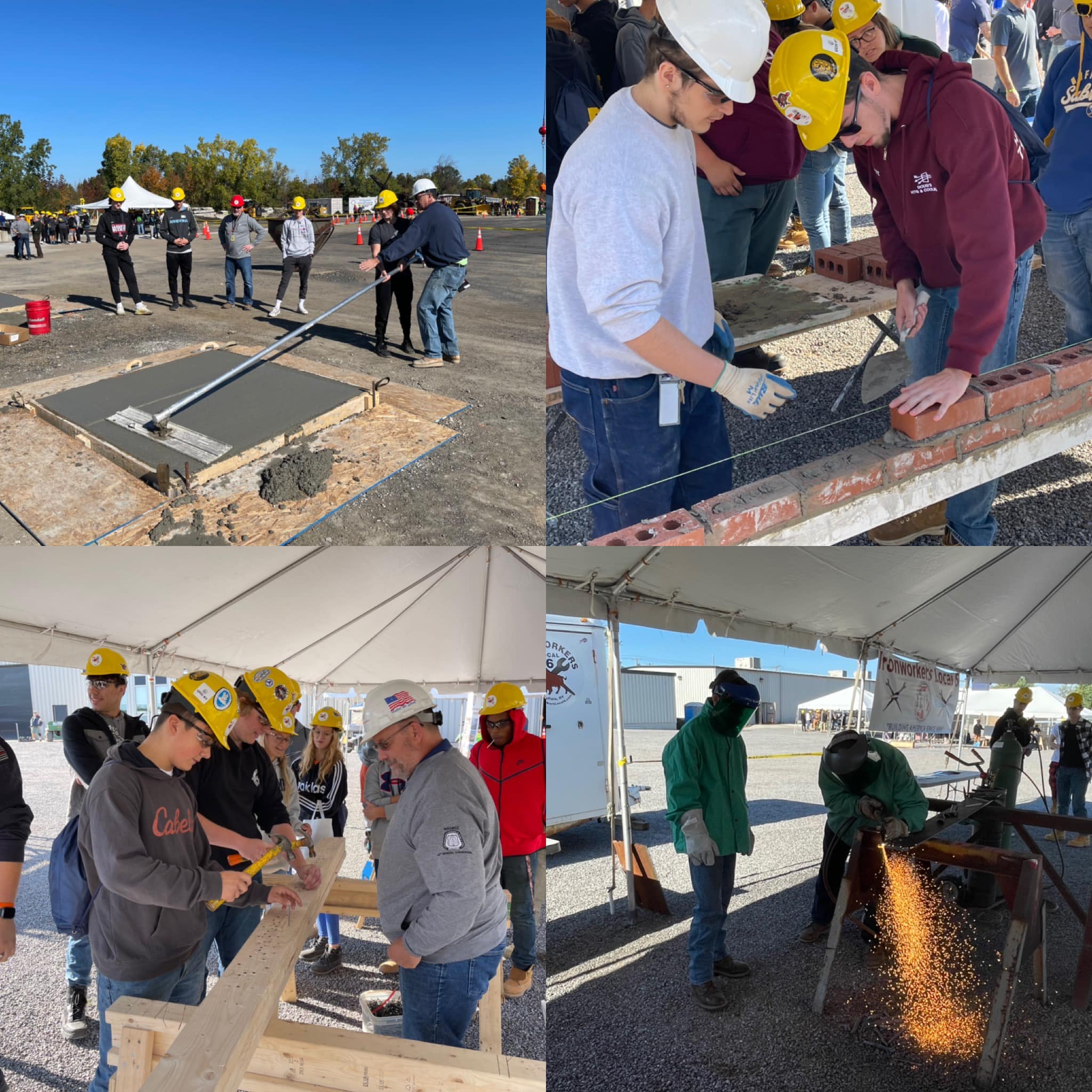 WNYLaborToday.com Editor’s Note: Pictured above in the collage - More than 500 high school students took part in the first day of Western New York Construction Career Days on Wednesday (October 5th) - a hands-on opportunity to consider a future career in the Unionized Building Trades.  Students took advantage of a number of opportunities, from finishing wet cement to bricklaying to carpentry to using a plasma cutting torch.   (WNYLaborToday.com Photos)

(LAKE VIEW, NEW YORK) – Melisse Machnica, a Social Worker at Lancaster High School, watched intently as some of her school’s 58 Junior and Senior students who made the bus trip to Western New York Construction Career Days took turns using a plasma torch to cut through a steel plank under the watchful eye of an Ironworkers Local 6 Instructor on Wednesday (October 5th).  It was the first of two days of Construction Career Days, a hands-on event held by the Buffalo and Niagara Building Trades Unions in an effort to introduce young people to a potential career in the Unionized Construction Industry. 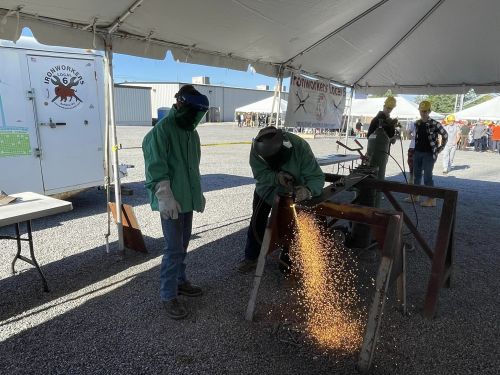 “‘For us (high schools) to do this, things like hands-on, we can’t replicate it,’” Machnica told WNYLaborToday.com as the first wave of 500-plus students descended on International Union of Operating Engineers (IUOE) Local 17’s sprawling 400-acre Training Center in Lake View (located just south of Buffalo) for the 14th Construction Career Days - back after a two-year break due to the Coronavirus Pandemic. 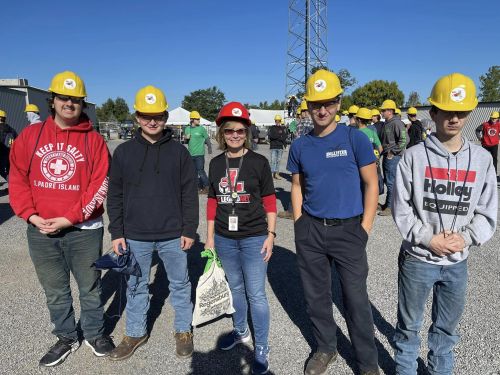 “‘We can talk to them about it, how cool a job these are, but this - especially with such patient Union Representatives doing this, it’s like walking on Mars.’  ‘It’s priceless,’” said Machnica (pictured above with some of her students), who added Lancaster High School has a Trades Academy, which also helps introduce interested students to a career in the Trades.  “‘We’re giving them more (career) options and their potential earnings.’  ‘We’re telling them to consider the Trades.’” 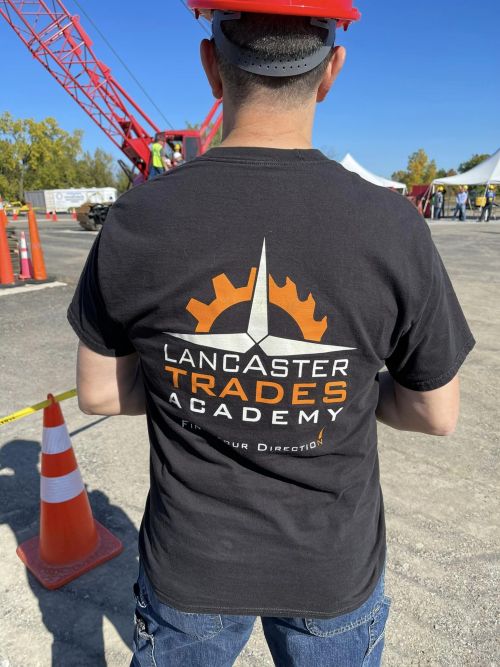 “’Hopefully they’ll be interested in what’s here,’” offered Ironworkers Local 6 Business Manager Tom Halligan, who took time out his busy schedule to introduce interested students to some welding (pictured below, on the left), complete with sparks flying, in an open area outside Local 17’s Union Headquarters where nearly 20 other individual Trades set up areas where hands-on opportunities were also offered. 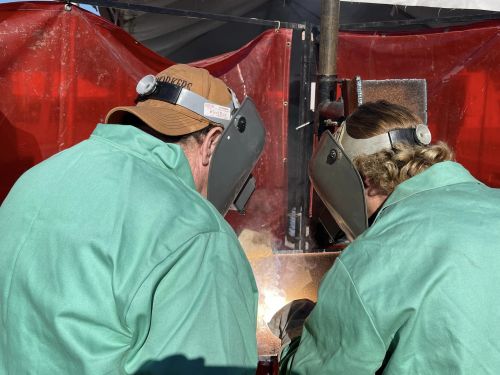 With more than 1,100 high school students from 34 schools across the region slated to attend, the Building Trades hope the offering will bring aboard Workers to replace those who are continuing to retire and replenish a local Workforce that is desperately working hard to educate young people to the many, good-paying job opportunities that exist across the Unionized Trades, especially in light of a number of major projects that are coming in the next couple of years here in Western New York, most notably building a new stadium in Orchard Park for the National Football League’s Buffalo Bills. 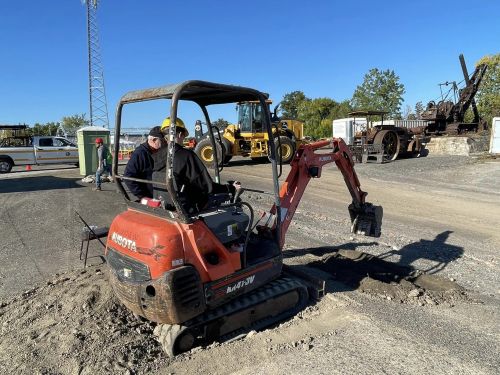 Before the visiting students were allowed to go out into the outdoor training area, they received a “safety talk” from Carley Hill (pictured below), whose family operates Union Concrete and Construction in West Seneca.   Hill now runs two local companies that focus on construction workforce training.  After the talk, each student was provided with a hard hat, safety glasses and small backpacks that contained an array of information on the Building Trades and their many Apprenticeship offerings. 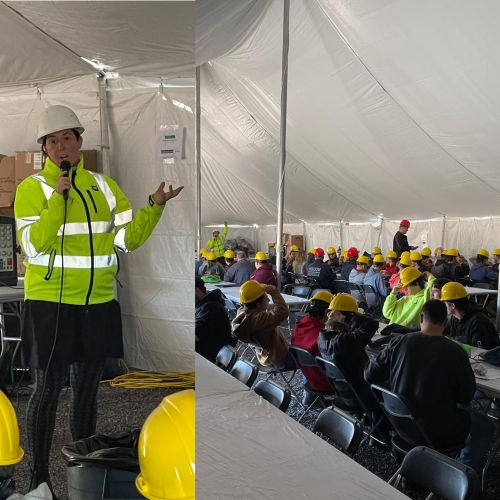 Those Trades on site offered students (about 550 slated to attend each day) a variety of opportunities in order to show off and attract them to their individual crafts, from students operating small excavators under the watchful supervision of Union Representatives to bending pipe or being elevated high above the ground while perched in a scissors-lift to taking turns on virtual painting and welding - as well as running a bulldozer (pictured below), offerings, to name but a few. 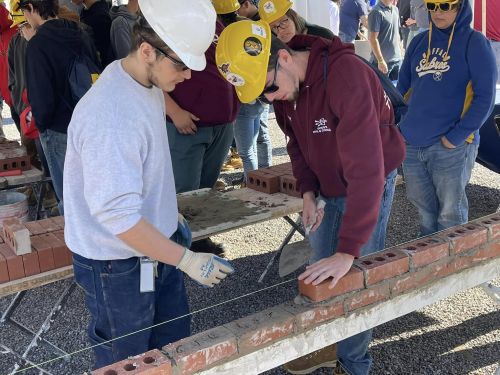 “‘Our numbers are down and this is well-needed,’” IUOE Local 17 Training Coordinator Kelly Roblee told WNYLaborToday.com prior to the event.  “‘To get these kids out here is good so they can get some get hands-on (experience).’  ‘At least it puts the idea (of a career in the Trades) in their heads.’” 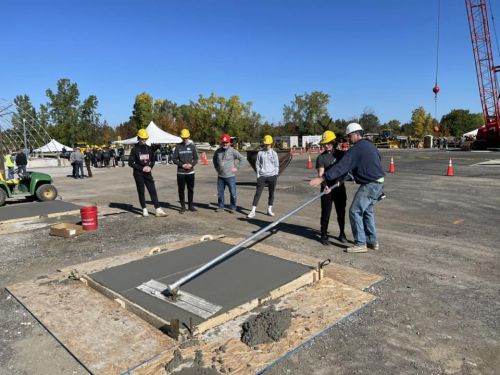 Three Pioneer Central High School students - Caelyn Goodemote, Austin Inluxay and Barrett Minklein, all spoke with WNYLaborToday.com as they waited their turn to operate a small backhoe and the trio were all in agreement - they “were excited to be here,” they came “for more experience” and looked forward “to playing a (future) role in building our (the region’s) infrastructure.” 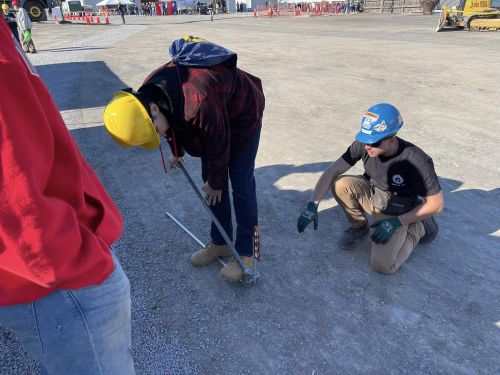 “‘I just wanted to learn more,’” Inluxay, 16, said of the reason why he decided to attend Construction Career Days.  “‘I’m excited to try the big machines,’ like the crane.  ‘It’s not just about the money’ (in great wages and benefits).” 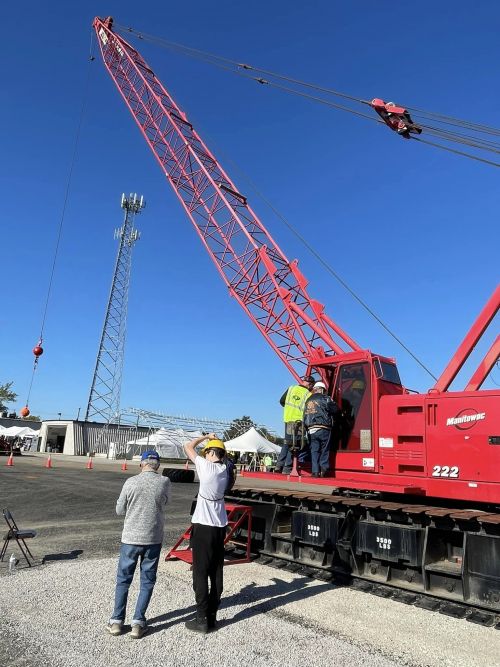 “‘I’m hoping to get into construction and I want to learn more,’” said Minklein, 15.  “My Dad was in roofing and is now into HVAC.  ‘It’s a mix’ (his interest in the Trades) - ‘I want to do something for the community and be proud of the role I played in (building our) infrastructure, but I want to get paid too.’” 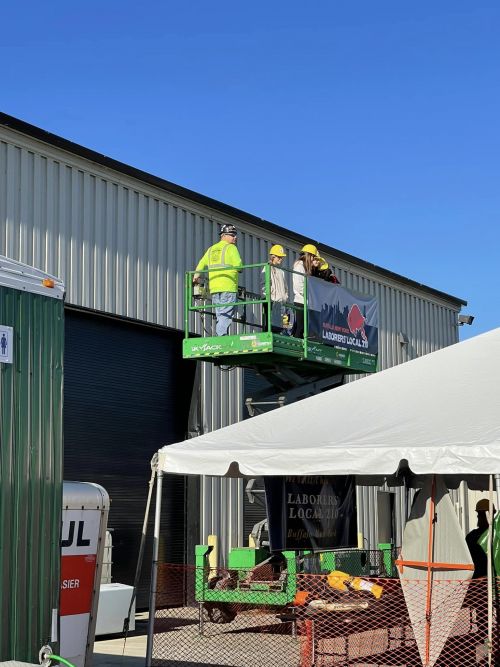 On that note, IUOE Local 17’s Paul Hopkins didn’t miss a beat, telling students as they waited in line to try their hand at running a backhoe: “‘They can make ($100,000 to $150,000 as a Journeyman) a year.’  ‘A lot of them can’t fathom that.’  They said: ‘Sign me up.’  ‘We’re just letting them know that there are other things than just going to college.’  ‘If they can get through an Apprenticeship, they can earn a great living and work anywhere across the United States.’” 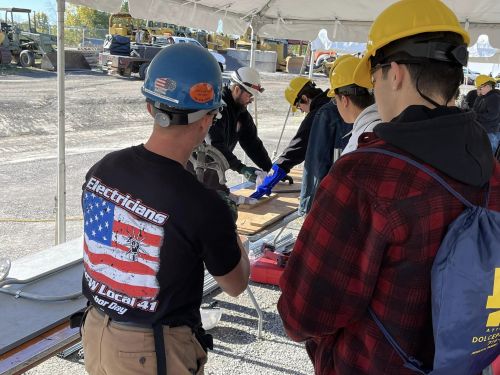 Stephen Cappotelli (pictured below), who serves as Training Coordinator for the North Atlantic States Regional Council of Carpenters Local 276, watched as two students held a competition to see who would be the first to hammer down nails into a two-by-four, which drew the cheers from their fellow students who waited their turn. 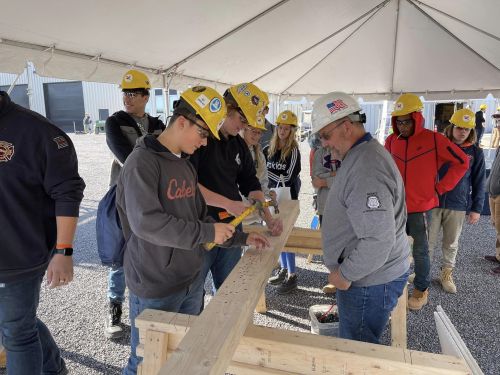 “‘They love pounding the nails,’” Cappotelli smiled.  “‘But we need more’ (Apprentices).  ‘There’s so much work out there and there are so many different (Union) hands-on stations (here).’  ‘We’re also telling them’ that’s this is a ‘free’ education - they ‘earn as they learn.’”

And it doesn’t stop with Construction Career Days for the Carpenters, who were holding an event for 70 high school students this week at the Union’s Rochester Training Center, with some even traveling from Niagara County and up from the Southern Tier.

Carpenters Council Representative Jeff Pasnik said that in Erie County, a Carpenter can make an hourly wage and benefits package of $62 - which includes a $33.74 hourly wage.

“‘Of course, their (the students’) eyes get big when you tell them that.’  ‘It comes out to about (one) dollar per minute.’  ‘That’s because we’re professionals - we’re the NFL of Carpenters.’  ‘All it takes is the training and that’s what we are trying to instill in (the visiting students),’” he said. 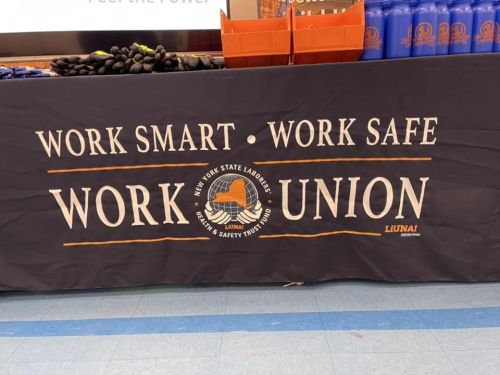