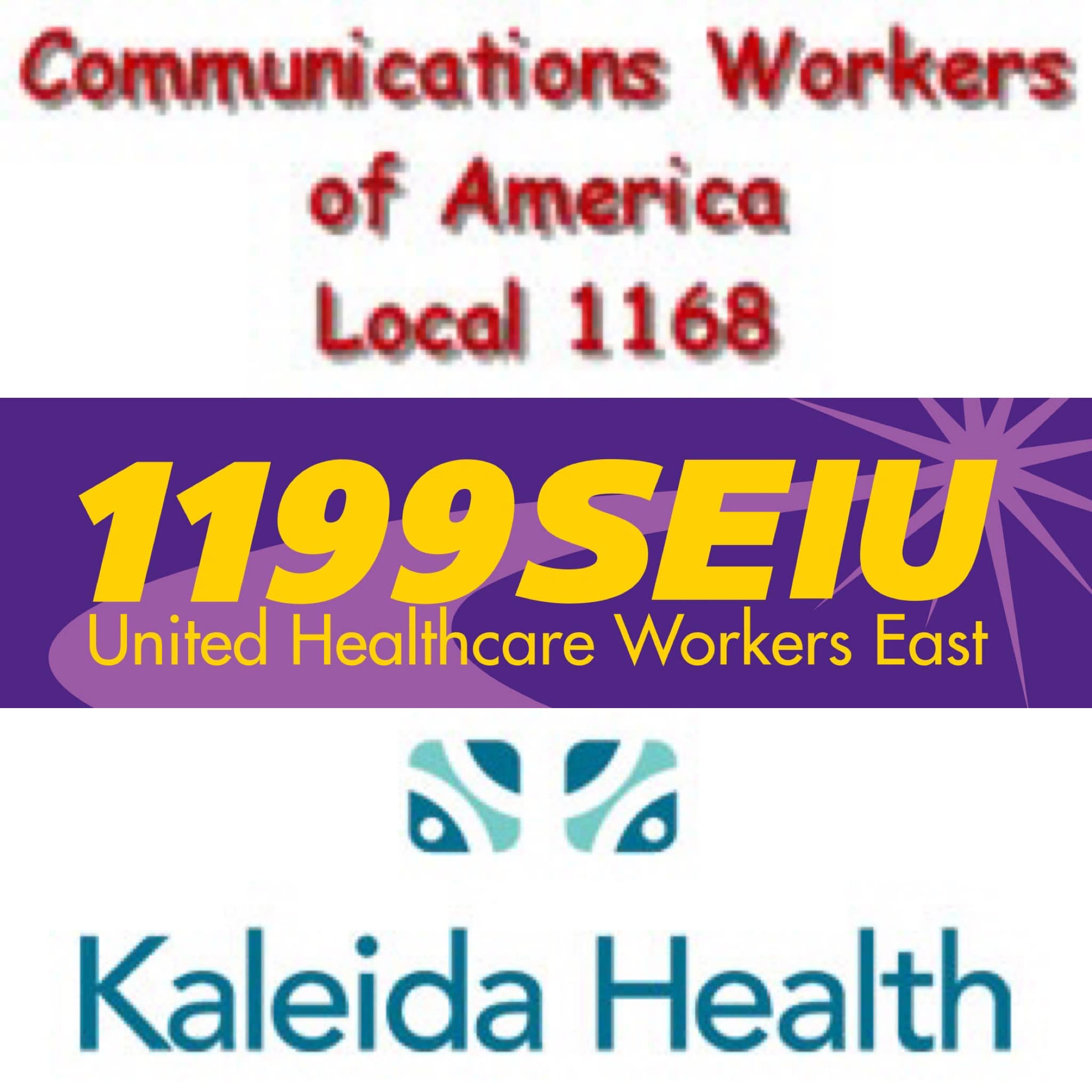 The tentative agreement with the hospital system was reached late Sunday (October 2nd), following intense all-day bargaining sessions held this week by Union Members and Kaleida management, as they fought to avoid a Strike.

Details of the agreement will not be made public until Union Committees are able to brief all Members on the agreement.

Earlier this month, Nurses, Professionals, Clinical, Technical, Service and Clerical Workers at Kaleida Health, who are represented by CWA Local 1168 and 1199 SEIU, overwhelmingly voted to authorize a Strike if no agreement could be reached.

Of Union Members who voted, 96% were in favor.

Having already extended their contract twice after six months of bargaining, Union Workers demanded Kaleida, the largest private employer in Western New York, do more to address the understaffing crisis in their hospitals.

During bargaining, the Unions called on Kaleida to invest in recruiting and retaining Workers to fill more than 800 open job vacancies, in addition to adding more positions to meet staffing ratios agreed upon under New York State’s new Clinical Staffing Committee Law.

“Our Members stood up and spoke out to demand changes in their workplace, clearly outlining the priorities for this agreement,” Jim Scordato, 1199 SEIU’s Vice-President for WNY Hospitals, said. “We successfully negotiated an agreement that will improve the lives of our members.”

Cori Gambini, President, CWA Local 1168 and a Registered Nurse, said: “The last thing we wanted was a Strike, and this week, our Committee worked around the clock to avoid that.  With nineteen Bargaining Units to cover, it was hard work, but we have won an agreement that will keep talented Health Care Workers at Kaleida and alleviate what is currently a devastating staffing shortage.  After years of exhaustion, back to back shifts and unmanageable patient loads, we knew for the sake of our patients’ health and safety that we could not back down from this fight.  Now, we are looking forward to getting back on track by restoring staffing levels and being able to deliver the highest quality patient care.  I’ve been proud to work alongside this committee as we fought to bring our Membership the contract they deserve.”

CWA District 1 Area Director Debora Hayes said: “Our two Unions stood together, over six thousand strong, and refused to accept weeks of proposals from Kaleida that we knew would not address the underlying factors that have led to deteriorating patient care, Staff burnout and turnover.  We put quality patient care at the top of our agenda and fought tirelessly for contract proposals that could make Kaleida a great place to work and to be cared for again.  This was a hard-won victory not only for Workers, but for everyone in the Buffalo Community who relies on Kaleida for their health care.”

CWA District 1 Vice President Dennis Trainor said: “Through their Strike Vote, Union Health Care Workers made an overwhelming decision that they would not settle for the status quo of being chronically understaffed, fearing for their patients’ safety, and the discouragement and anger that comes with not being able to give their patients the attention they need and deserve.  They came right up to the edge of a Strike, and in the end, that is what some employers need to fear in order to take Workers’ needs seriously.  While hospitals everywhere are facing a nationwide staffing crisis, it is Union Members who are standing up for patients and fighting for change to address it.  Similar to what our Members accomplished at Catholic Health Hospitals last year, Kaleida Health Workers also demanded the safe staffing levels needed to ensure quality care and safety, and I could not be prouder of them for standing strong in this fight.”

Todd Hobler, 1199SEIU Executive Vice-President for Upstate NY said: “The Members of 1199S EIU and CWA came together and took a stand to demand better staffing and a fair contract and were unwilling to accept anything less.  These were very difficult negotiations but this settlement shows the power of Working People uniting for a common purpose.  Our Members were willing to strike to protect quality patient care and won a significant victory.  The Buffalo Labor Movement is truly setting the example for Workers across this country who are rising up and fighting for better working conditions.”

The tentative agreement will now be reviewed by Kaleida’s Union-represented Staff and a ratification vote is expected to be held within the coming weeks.