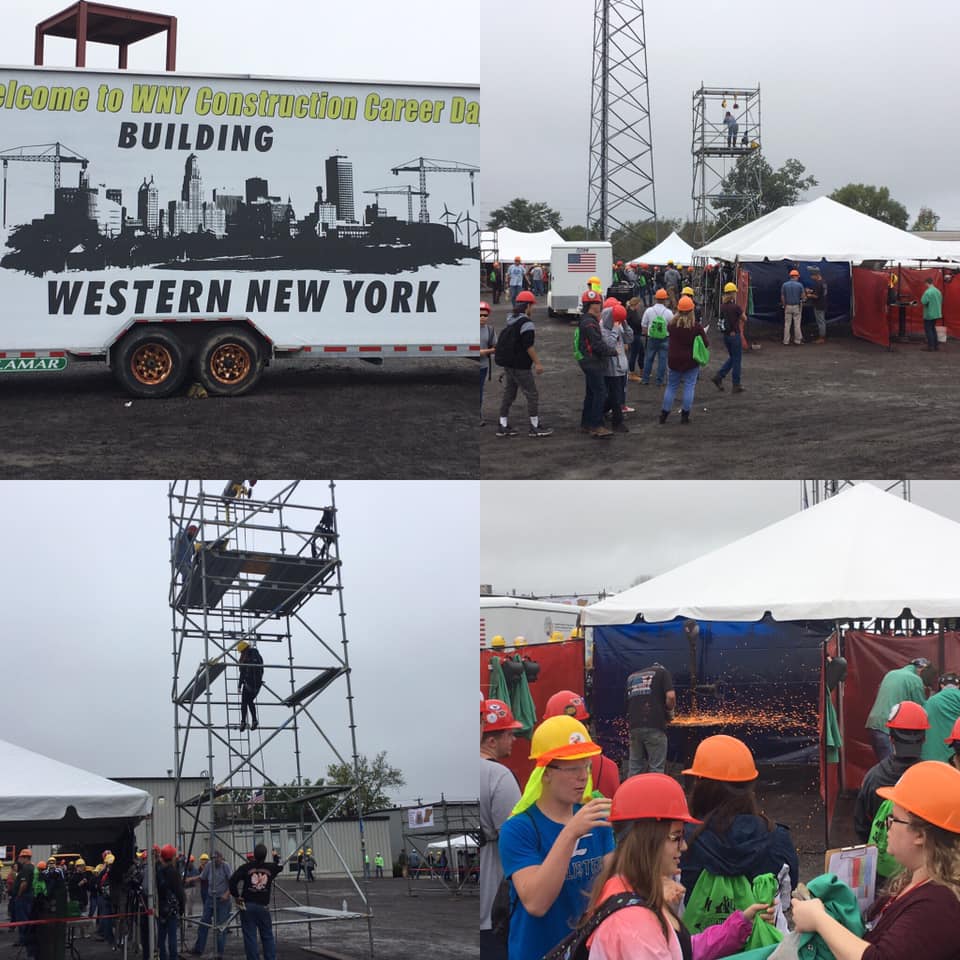 (LAKEVIEW, NEW YORK) – After a two-year break due to the COVID-19 Pandemic, more than 1,100 high school students from 34 schools across the region are expected to attend the Western New York Construction Career Days Event, which will be held on Wednesday, October 5th and Thursday, October 6th at the International Union of Operating Engineers (IUOE) Local 17’s sprawling 400-acre training site in Lakeview, located just south of Buffalo.

This will be the 14th (overall) time that the two-day, introductory, hands-on opportunity will be hosted by the individual member Unions of the Buffalo & Niagara Building Trades Council, which is being welcomed back by many after being shut down by the pandemic in both 2021 and 2020.  That’s because the Construction Industry is in dire need of bringing aboard Workers to replace those who are continuing to retire and replenish a Workforce that is desperately working hard to educate young people to the many, good-paying job opportunities that exist across the Unionized Trades, especially in light of a number of major projects that are coming in the next couple of years here in Western New York, most notably building a new stadium in Orchard Park for the National Football League’s Buffalo Bills.

And that includes the Seneca Nation of Indians, who - for the first time ever, will have a physical presence at the Construction Career Days Event in an effort to make a greater connection between the Unionized Trades here in Western New York, which Christopher Reiller hopes will ultimately generate opportunities for the young people of his Native American Community.

“There’s a ‘lack of knowledge’ (regarding opportunities in the Trades),” Reiller, who serves as a Tribal Employment Rights Office (TERO) Director and Highway Commissioner for the Seneca Nation, tells WNYLaborToday.com.  “By participating in the event, ‘we’re hopeful that a sliver of that opportunity comes our way to provide our young people with a better path.’”

Reiller, who said he was aware that a bus of students from Salamanca High School will be making the trip to Lakeview, also underscored the fact that there are Senecas who are Union Members and who are currently working in the Trades with the Bricklayers, Carpenters, Electricians, Laborers, Operating Engineers and the Plumbers - including some who’d worked on building the Seneca Nation’s Casinos in Niagara Falls, Salamanca and Buffalo in years past.

“‘But we need to get more of our people (into the Trades), so it’s critical we’re here,’” he continued.  “It’s ‘very important that we too take advantage of the opportunities.’  I will tell those who I speak with ‘to ask as many questions as you can, shake hands and spent more time on any Trade that you are interested in.’  ‘Of course (the Seneca Nation too wants to play a role in) replenishing the next generation (of Construction Workers).’” 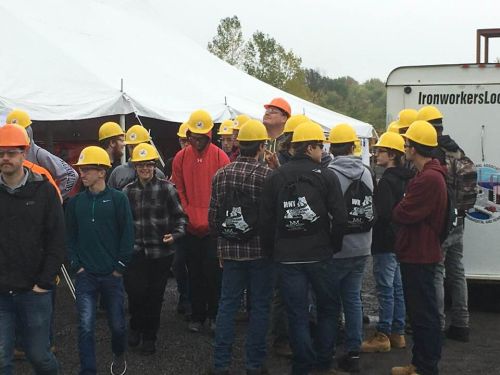 Those Trades on site will offer students (about 550 slated to attend each day) a variety of hands-on opportunities in order to show off and attract them to their individual crafts, from students running small excavators under the watchful supervision of Union Representatives to being propelled up scaffolding or elevated high above the ground while perched in a scissors lift to taking turns on virtual painting and welding offerings, to name but a few.

The students will also get a “safety talk” before they are allowed to go out into the outdoor training area.  Each will be provided with a hard hat, safety glasses and small backpacks that contain an array of information on the Building Trades and their many Apprenticeship offerings.

“‘Our numbers are down and this is well-needed,’” IUOE Local 17 Training Coordinator Kelly Roblee told WNYLaborToday.com after a recently-held Committee meeting to tie up loose ends just before the October event (Pictured Below/WNYLaborToday.com Photo).  “‘To get these kids out here is good so they can get some get hands-on (experience).’  ‘At least it puts the idea (of a career in the Trades) in their heads.’” 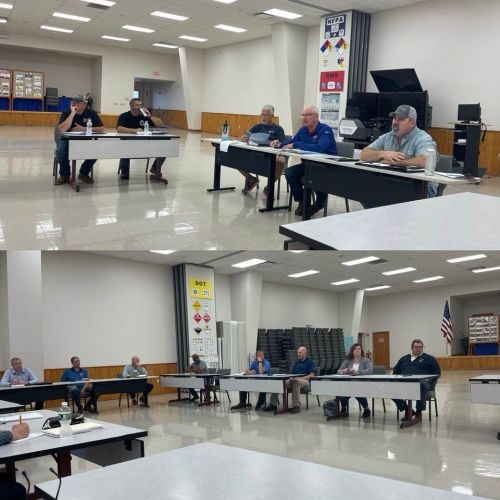 “This event ‘is a lot of work, but we know that,’” said Jim “Smoker” Smolinski, who serves as Local 17’s Administrative Manager at the Union’s Training Facility.  “‘I think everyone is excited’ (the event is back).  ‘We’ll have a lot of new technology to show off.’  I know the Carpenters, Cement Masons, Electricians and the Roofers, as well as our Union, ‘will all have’ simulators for the students to try.”

The Operating Engineers, much like every other Building Trades Union, is seeing their older Members retire on a yearly basis and is always looking to attract qualified applicants to their stellar Apprenticeship Training Facility.  Right now, as many as 20 to 30 are retiring each year.  Local 17 currently has 34 Apprentices in its program and the Union will be looking to add another 12, Roblee and Smolinski said. 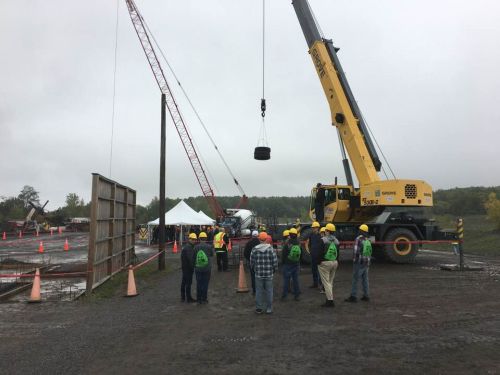 Keeping in mind that those students attending WNY Construction Career Days are presently in the 11th and 12th Grade, it does take a bit of time for those interested in pursuing a career in the Unionized Trades to apply - just as soon as they get old enough.

“‘They’re starting to trickle in and we’re starting to see an increase’ (in the number of Apprentices who actually visited Construction Career Days in the past).  ‘Now, (Local 17 is) getting five to ten a year who apply,’” Roblee and Smolinski said.

For More On WNY Construction Career Days, Read: A Preview Of The 2019 WNY Construction Career Days Event: Unionized Trades Ready To Welcome 1,200 Area High School Juniors & Seniors To Hands-On Introduction That ‘They Hope Will Eventually Lead Many Into High-Paying Careers’ At www.wnylabortoday.com/news/2019/09/29/buffalo-and-western-new-york-labor-news/a-preview-of-the-2019-wny-construction-career-days-event-unionized-trades-ready-to-welcome-1-200-area-high-school-juniors-seniors-to-hands-on-introduction-that-they-hope-will-eventually-lead-many-into-high-paying-careers/

WNYLaborToday.com File Photos Were Used In This Labor News Report.