Columbus Museum Of Art Employees Form A Union Through AFSCME 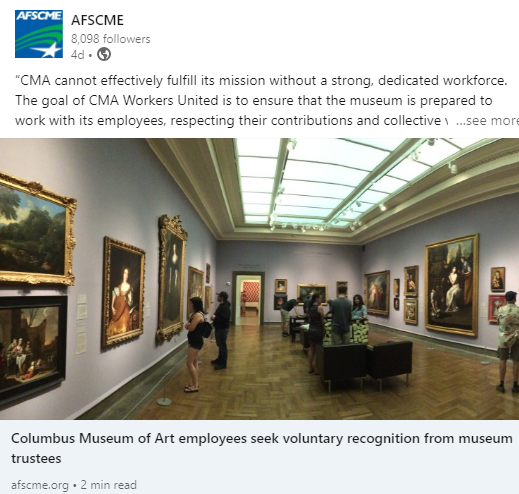 (COLUMBUS, OHIO) – Employees at the Columbus Museum of Art want management to voluntarily recognize their union, which Workers are forming through American Federation of State, County & Municipal Employees (AFSCME) Council 8.

In late August, 30 Employees delivered a letter requesting voluntary recognition of their Union, Columbus Museum of Art Workers United (CMAWU), and the right to begin collectively bargaining with the museum.

Employees at the City’s premiere cultural institution have always been committed to making art more accessible to the public, but museum managers’ lack of respect towards Employees, their brushing aside of proposals for meaningful changes to the museum’s operations, and their disregard for the health and safety of employees during the COVID-19 Pandemic are primary reasons Workers cite for their organizing efforts.

Employees like R.G. Barton, a Visitor Engagement Employee, say the only way they can make lasting improvements is when their Union is recognized and administration begins to hear and respect Workers’ voices: “CMA cannot effectively fulfill its mission without a strong, dedicated workforce.  The goal of CMA Workers United is to ensure that the museum is prepared to work with its Employees, respecting their contributions and collective voice.  CMA Workers United is committed to seeing this venerated cultural institution value not just the community it serves, but its Employees that are vital to its operation.”

CMAWU has received an outpouring of support from their community and several Columbus political and legislative leaders.

In a letter, all three Franklin County Commissioners said they recognize the important connection between collective bargaining and a more equitable and productive future for the community.

“Allowing for collective bargaining would be a way to join us in our efforts to ensure residents and children have equitable access to opportunities for a productive, prosperous and thriving future,” County Commission President Erica Crawley and Commissioners John O’Grady and Kevin Boyce wrote.

The community is also standing in solidarity with the CMAWU Members - a petition asking the CMA Board of Trustees recognize the Union has 600 signatures.

AFSCME’s Cultural Workers United Campaign represents more than35,000 Workers at museums, libraries and zoos - who are increasingly joining together to negotiate for better pay, working conditions and to demand equity and fight for transparency in their workplaces.