What Would The Grey Nuns Of The Sacred Heart Think? Labor Turmoil At Buffaloâs DâYouville University Has Some Staff âLeaving For Greener Pasturesâ As Union & Management âAre Locked In Contentious Negotiationsâ On A New Contract 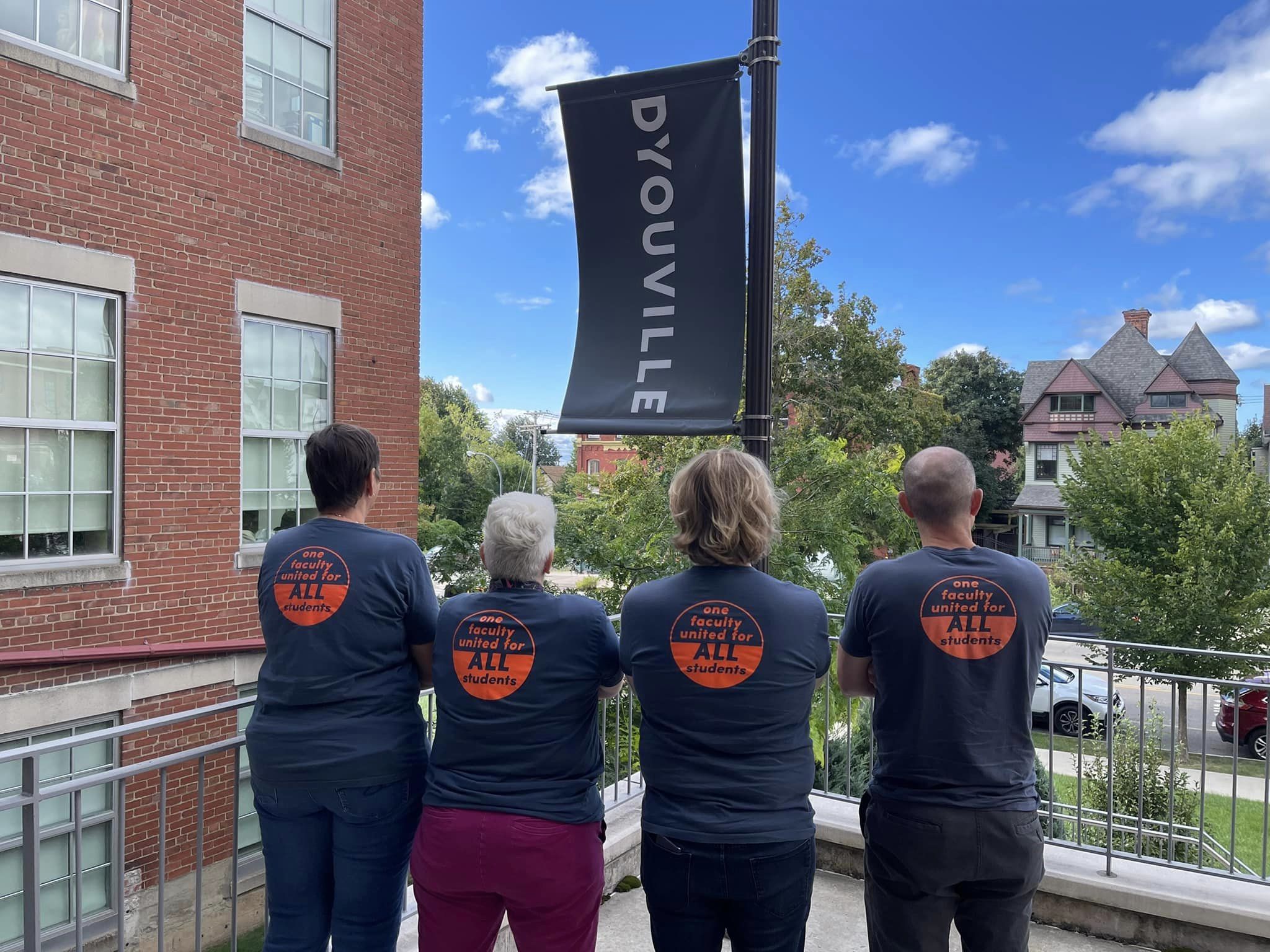 WNYLaborToday.com Editor’s Note: Pictured above, Members of the American Association of University Professors (AAUP) turn their backs to display a message the Union is sending to D’Youville University Administrators as they attempt to bargain a new contract: one faculty united for ALL students.  The Members strike a pose outside one of the buildings located on the sprawling campus of the private Buffalo University that’s charged with grooming future generations of Caregivers and Nurses, many of whom will one day work in the region’s many hospitals, medical facilities and nursing homes.  (WNYLaborToday.com Photos)

(BUFFALO, NEW YORK) - One can only wonder what the Grey Nuns of the Sacred Heart, who founded D’Youville University back in 1908, are thinking when mulling over how the professional and Unionized Staff is currently being treated at the Buffalo Nursing School - especially when the educational institution is charged with preparing future generations of Nurses to take care of patients at local hospitals, medical facilities and nursing homes.

And with the need so severe because of a shortage of Caregivers across the country, how can a private university - whose reputation is pegged on successfully graduating students who will replace those retiring and to fill thousands upon thousands of open slots do so when its own Professional Staff is being pared down - with a number relocating their teaching services to other educational institutions, such as Niagara University, which Members of the American Association of University Professors (AAUP) joking call the “D’Youville of the North.”

It all starts with the fact the AAUP and its Membership are currently without a new contract, are working through contentious negotiations with the University, all while watching some of their Membership not only make the decision to walk out the door, but literally fight to keep their thoughts to themselves because of the fear they have that if they speak out, their positions might not be renewed annually.

American Federation of Teachers (AFT)-affiliated AAUP Local 6780 currently has 153 Members, consisting of Faculty, Clinicians and Librarians.  However, that number has dwindled by 20 just over the past 12 months - mostly in teaching positions.  As many as one-quarter of that number left to take better jobs with competing institutions, the Union said, including Daemen College (in the Buffalo Suburb of Williamsville) and Niagara University.

Staff who’ve left for Niagara are making an additional $5,000 in yearly salary as a result of the switch, they said. 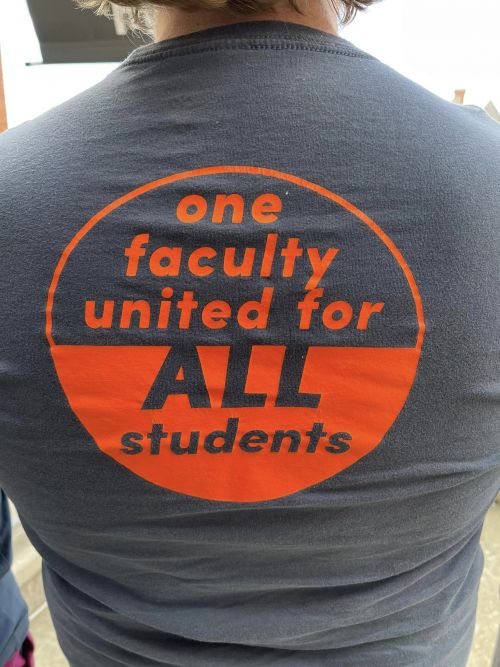 To set the stage, AAUP provided WNYLaborToday.com with the following information: We currently have 106 dues-paying Members.  The Bargaining Unit has 153 full-time Faculty and Librarians.  It is also notable D’Youville reported 193 full-time Faculty in 2017 and 50 librarians in 2015.  There are now approximately 150 full-time Faculty and four Librarians.  Some of this loss is probably due to changes in categorization, but there are serious losses.  Twelve full-time Faculty and Librarians took an early retirement package in the Spring.  (AAUP) estimates half directly did so due to the conditions at D’Youville.  At the same time, (AAUP) estimates five-to-10 people who were not eligible for the early retirement package simply resigned out of frustration.  We are certain our density would be higher, but the University has resisted tenure-track hires in several disciplines for years.  This means that, while such Faculty are full-time and Members of the Bargaining Unit, they are on short-term contracts that require renewal - and they can essentially be fired without cause through non-renewal.  Many people across the institution fear retaliation and don’t speak out.  This is definitely true of non-tenure track Faculty.

“The ‘general trend is fewer’ Faculty ‘and less ‘administrative support for instruction - ‘at the same time, we’re seeing growth in’ administrative positions and investment in buildings and ‘fancy’ remodels.  But the Faculty ‘who perform the core function’ of (the University) - teaching - ‘we’ve been left in the cold,’” AAUP President Brandon Absher told WNYLaborToday.com during a sit-down interview held on D’Youville’s sprawling City campus. 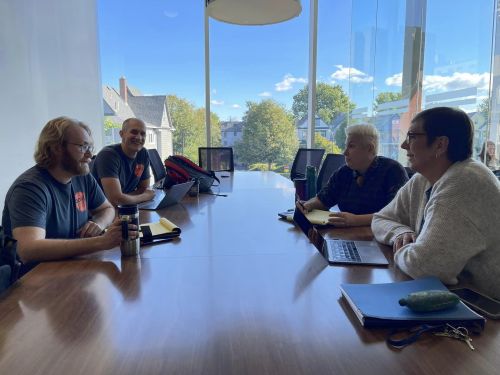 Your On-Line Labor Newspaper interviewed the four, who detailed the sorry state of affairs at D’Youville regarding the way the Administration is failing to value or respect its Staff, as well as the way - they say, its representatives are conducting themselves at the bargaining table and what it means to the future of the University if its Professional Staff as some continue to walk out the door for better pay and working conditions.

“In the Spring of 2021 the Union issued a ‘vote of no confidence’ in the President (Dr. Lorrie Clemo, whose yearly base compensation averages more than $300,000, with bonuses sometimes in the tens of thousands of dollars, according to the AAUP),” said Partridge, adding the Union’s Membership continue to work through the Coronavirus Pandemic and were branded as essential.

After the Union’s vote of no confidence, Absher added: “Our Members ‘became fearful of the situation (regarding renewed employment) after (Clemo) ‘turned on the Faculty.’”

The Union’s current contract expired on September 1st, 2021 - and even though negotiations started months before in February of last year, 36 sessions have proved fruitless to bring about agreement on a new contract.

The D’Youville AAUP has a bargaining platform based on central pillars of academia: Academic freedom; Shared governance and transparency; Job security for all Faculty and Librarians; Protection of intellectual property; Economic security; and Faculty workload.

But Union Representatives say negotiations “were ‘difficult from the beginning.’”

Case in point, “everyone who applied for sabbatical in the Spring was ‘denied with the cause being stated explicitly as Union opposition to change to the policy that had not been negotiated,’” they said.

In addition, Faculty workload has been reassigned to Administrative Staff, majors have been paused, Staff have been called in for what the AAUP says are bogus disciplinary meetings - and, the general structure of the institution has been reorganized with seemingly deliberate disregard for the AAUP contract, Union Officials said.

AAUP says the administration opened with a proposed 0.5% raise to rank minimum salaries for each year of the contract and proposed a 0.5% lump sum payment on base salary in lieu of a raise for the first year - to be followed by 0.5% raises for the remaining years of the contract.

On the flip side, it would appear the University is doing well financially, according to the AAUP, which has dug into D’Youville’s financials: In 2020, the College reported a net increase in assets, bringing in well over $66 million in revenue.  This represents an annual increase in revenue of over $7 million from 2015, when revenue was just over $59 million; And as a percentage of total salaries, instructional salaries have pretty consistently declined in the period 2015-2020.  Despite a jump in 2016 to a high of 65.1%, the percentage has since dropped to around 62%.  At the same time, salaries for “institutional support” have consistently risen, with salaries in this category increasing from 9.7% of total in 2015 to 12.9% in 2020.

At the same time, AAUP said the University has proposed cuts to health care benefits, putting forward a high deductible plan to replace the current plan.

Since that time, Faculty and Librarians have been subject to retaliation and a campaign to demoralize, the AAUP charges.  And to make matters worse, the administration wants the right to discipline Employees and have detention power if any bad mouth the University through Social Media, AAUP says.

“That’s a ‘non-starter, we’re not going to give them that power,’” Absher said.

“‘Every decision is a fight,’” Hechtel said.  “After seven years, (Staff) gets a semester sabbatical, ‘but every one (of the sabbaticals) has been denied.’”

Meanwhile, the University’s student population currently stands around 2,500 – which has fallen from 3,000, AAUP says.  The University graduates about 400 students a year.

Patridge says the general feeling of Staff is that the administration is pushing hard to increase student enrollment and “doing everything to get them in the door, but then - ‘the support fades.’”

“They’ve ‘become very gimmicky, but disingenuous,’” he continued.  “They have a (student debt) ‘Dogs Ate My Debt’ lottery, ‘which gives the impression a lucky student could have all their debt wiped out, but in reality, it’s only the student loans through D’Youville - nothing else.’”

As one might expect, Staff morale at the University is falling by the minute, the AAUP Representatives said.

“I had a colleague come up to me who said they ‘hated this place now.’  They said ‘it had lost that family feeling that they used to know, where everyone looked out for on another.’  And with the University ‘doing things to hurt (the Staff), they are so demoralized.’  One Professor ‘resigned in protest.’  ‘She refused to put up with (the current situation) anymore.’  ‘He was a very talented’ Professor and Researcher.  ‘It’s a very big loss,’” Absher said.

“The ‘mission of caring is gone that was in place under (past D’Youville President) Sister Denise Roche.’  (Staff) ‘was once given the structure to excel,’” Hechtel said.

“‘Now it’s a struggle to fight, every day, to do our jobs,’” Absher added.

Nonetheless, the AAUP Representatives said what they are asking for in the bargaining sessions “‘will make it possible for (Staff) to do our jobs better and do more for them (the University).’”

“‘This is what we chose to do - to serve our community,’” Absher added. 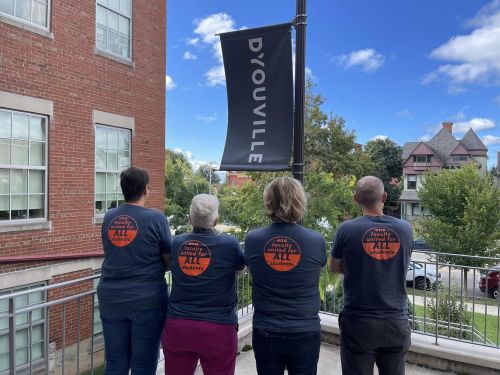