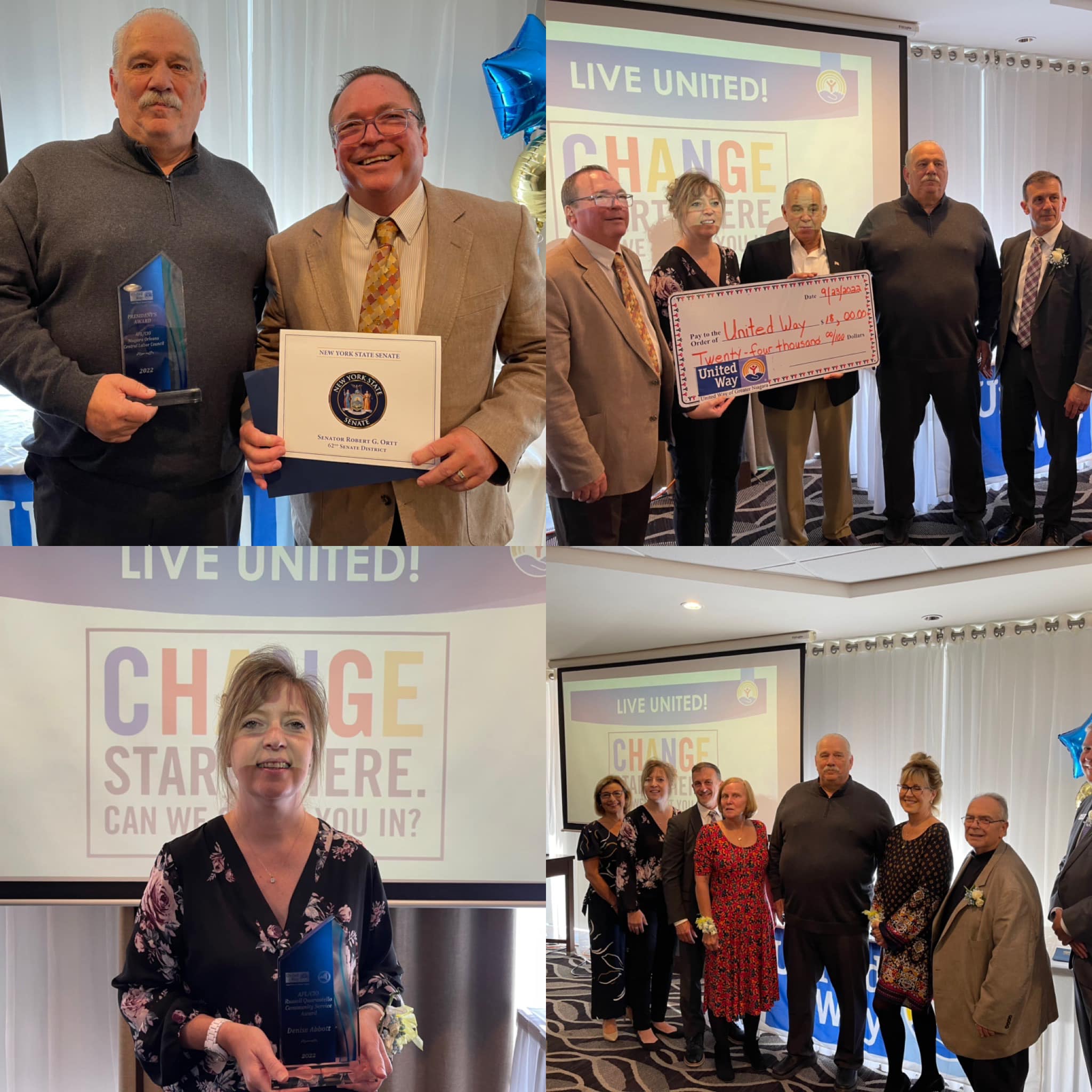 (NIAGARA FALLS, NEW YORK) – What a way to kick off the annual United Way of Greater Niagara’s (UWGN) 2022 Fundraising Campaign - with a big round of thanks to Labor.

The UWGN’s breakfast awards event got things underway on Friday (September 23rd) morning at the Niagara Falls Riverside Resort where the Niagara-Orleans AFL-CIO Central Labor Council and International Brotherhood of Electrical Workers (IBEW) Local 237 - joining with the National Electrical Contractors Association (NECA), made check presentations of a combined $42,400 to get the campaign off in grand fashion. 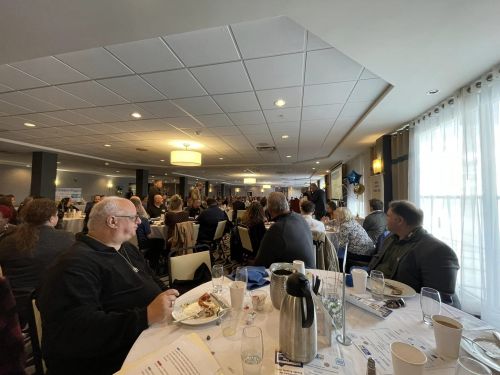 The Niagara-Orleans Labor Council made their check presentation of $24,400, proceeds of the 13th annual Labor’s Night at the Races event (which is held yearly at Ransomville Raceway in Niagara County), which brought the overall total to $184,000 raised over the years - and with all having gone to benefit the United Way.

And the IBEW and NECA’s $18,000 joint contribution was the result of Local 237’s Members agreeing to give up five cents for every hour worked over the past 12 months, money that’s specifically set aside to go to the United Way.

Bill Jakobi, who serves as UWGN Labor Liaison to the Niagara-Orleans Labor Council, told WNYLaborToday.com that while “no specific goal” has been set for its 2022 campaign – the United Way has always strived to hit the $1 million mark.  Last year, the UWGN campaign raised more than $900,000, he added, which goes to benefit more than 40 community programs funded by the United Way across this Western New York County, including - but not limited to, the Boy’s and Girl Scouts organizations, drug and alcohol rehabilitation, youth counseling services, credit counseling services and a variety of family and health services.

“Our Labor organization ‘partners with a lot of community groups,’” Briggs (Pictured below on the left with Jakobi/WNYLaborToday.com Photos), who also serves as United Steelworkers (USW) District 4 Sub-Director, said of the Labor Council and its affiliated Member Public, Private and Building Trades Unions.  “‘But we choose to partner with this group (UWGN), a path that we all walk down.’  Our Member Unions ‘will continue to support them and we thank them for their support of Working People.’” 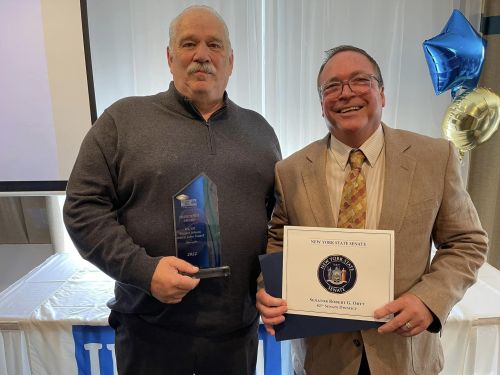 Jakobi introduced Abbott, rattling off a number of her “outstanding and unselfish” accomplishments, including being a Registered Nurse at DeGraff Hospital and serving as Co-Chair for Labor for the UWGN’s annual fundraising campaign.

“Denise is ‘dedicated to her Local and the Labor Movement and helps those less fortunate,’” Jakobi said.

Abbot (Pictured Below), who got emotional while addressing those in attendance, said: “‘Be the change you want to see in the world and with everything you do - make change, because you can change the world.’” 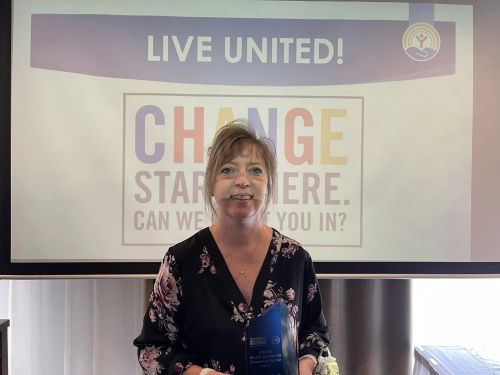 The award is named after the late IBEW Local 237 Business Manager Russ Quarantello, who was a huge supporter of the UWGN and always had his Union and its Members involved in giving back to the local community.  Quarantello’s family was also in attendance.

Mazzarella, who was praised as “well-deserving and wonderful, positive person,” said during her acceptance remarks: “‘It does not take one person, but a village (to accomplish such positive results) and my village is USW Local (0277)’ who are sitting at my table.  ‘They’ve stood by me and they are always there because when we raise people up, we all prosper.’”

Also receiving an award was Highmark Blue Cross Blue Shield of Western New York, a major sponsor of the Niagara-Orleans Labor Council’s Labor’s Night at the Races event whose reputation of giving back to the communities that it serves precedes itself.

“We are ‘honored and humbled,’” Highmark President Michael Edbauer (Pictured Above: From Left To Right – Jakobi, Abbott, Highmark Labor Representative Bob Butski, Briggs, Edbauer and Highmark’s Mike Ball) said during his acceptance remarks.  “We have a ‘strong partnership with Labor and we look forward to continuing to support the community.’” 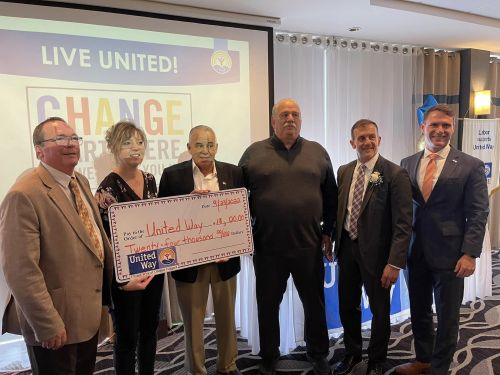 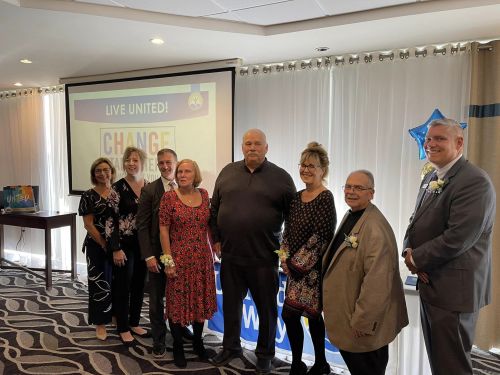