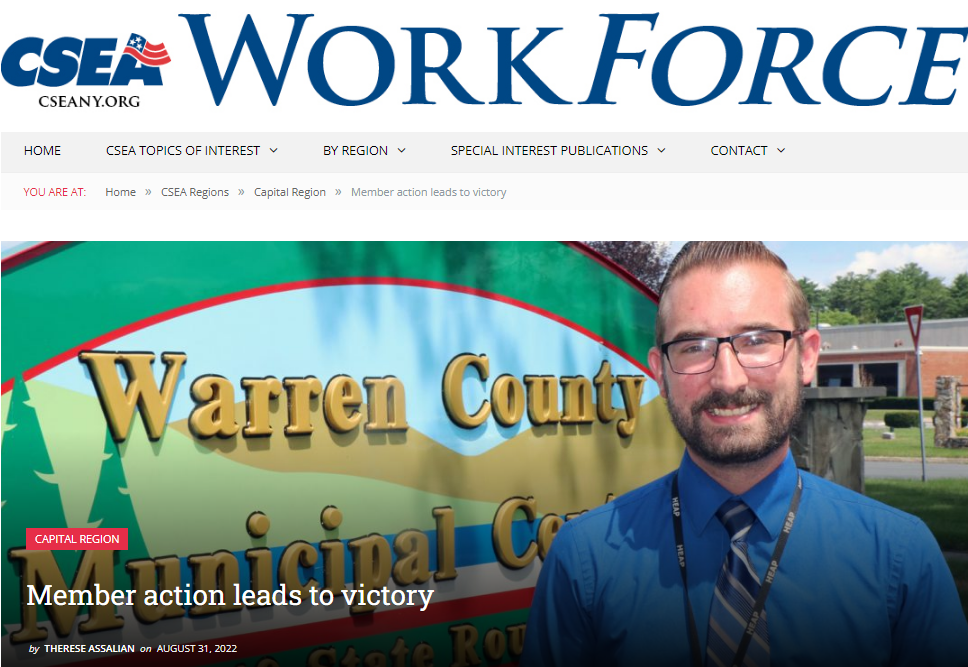 Connell’s research and tenacity, along with using his Union’s many Member resources and involving CSEA Members in advocating for a solution, recently led to a major victory for County Employees through across-the-board wage increases that will help improve Worker recruitment and retention.

Connell, a Social Welfare Examiner at the County’s Department of Social Services - who’s been Unit President since 2020, kept his eyes on County Board of Supervisors meeting minutes and noticed some information that spurred him to take action.

He not only noticed a high number of resignations, but other information that meshed with what he and his Co-Workers were experiencing - high turnover, low morale, overtime needed to cover the work and the stark reality that the County was not attracting new Employees.

In November 2021, Connell worked with CSEA Labor Relations Specialist Diane Selchick to craft a letter to the County’s Board of Supervisors Chair that detailed workers’ concerns and asked the Board to address the issues.

County Officials did not respond.

He shared the information he tallied from the Board meeting minutes - 67 Workers had resigned in the prior 12 months.

That letter, too, was ignored.

“At this point, we are getting angry,” said Connell, who also scoured other labor contracts provided by CSEA.

His research proved his suspicions – Warren County workers were being paid less than those in similar titles throughout the area surrounding the County.

To Continue Reading This Labor News Story, Go To: https://cseany.org/workforce/?p=11475