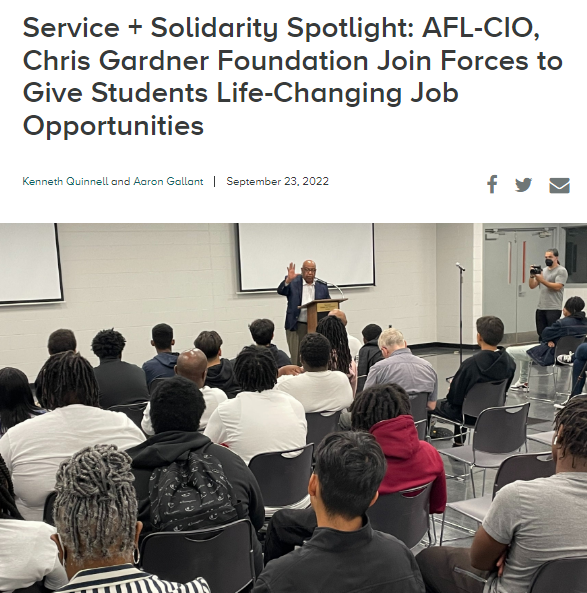 (DETROIT, MICHIGAN) – The National AFL-CIO has announced a ground-breaking and new partnership with the Chris Gardner Foundation’s Permission to Dream Program to put students with limited economic opportunities on an early path to the Middle Class.

Through the collaboration, the National AFL-CIO and its affiliated Unions and partners will give students in disadvantaged communities the opportunity and support to enter paid, Registered Apprenticeship Programs in the Building and Construction Trades.

“We’re thrilled to partner with Chris and his foundation to give more young people the opportunity to build family-sustaining careers,” Redmond said.

“Far too many young people do not feel hopeful about their economic futures and that is unacceptable.  By expanding access to our world-class Apprenticeship Programs, we will ensure that young people entering the workforce can experience the security and support of a good Union job,” he said.

The program will be piloted in select cities and schools across the country, where there will be an influx of funding for infrastructure and development projects - as well as jobs stemming from the passage of the bipartisan Infrastructure Law and the CHIPS and Science Act.

To Directly Access This Labor News Report, Go To: https://aflcio.org/2022/9/23/service-solidarity-spotlight-afl-cio-chris-gardner-foundation-join-forces-give-students