âWe Worked Through The Pandemic And Put Ourselves At Risk, So Not To Be Willing To Work With Us Is A Slap In The Faceâ - More Than 300 Buffalo Public School Teachers Picket Outside School Board Meeting, Demand Board Negotiate Contract In Two Weeks 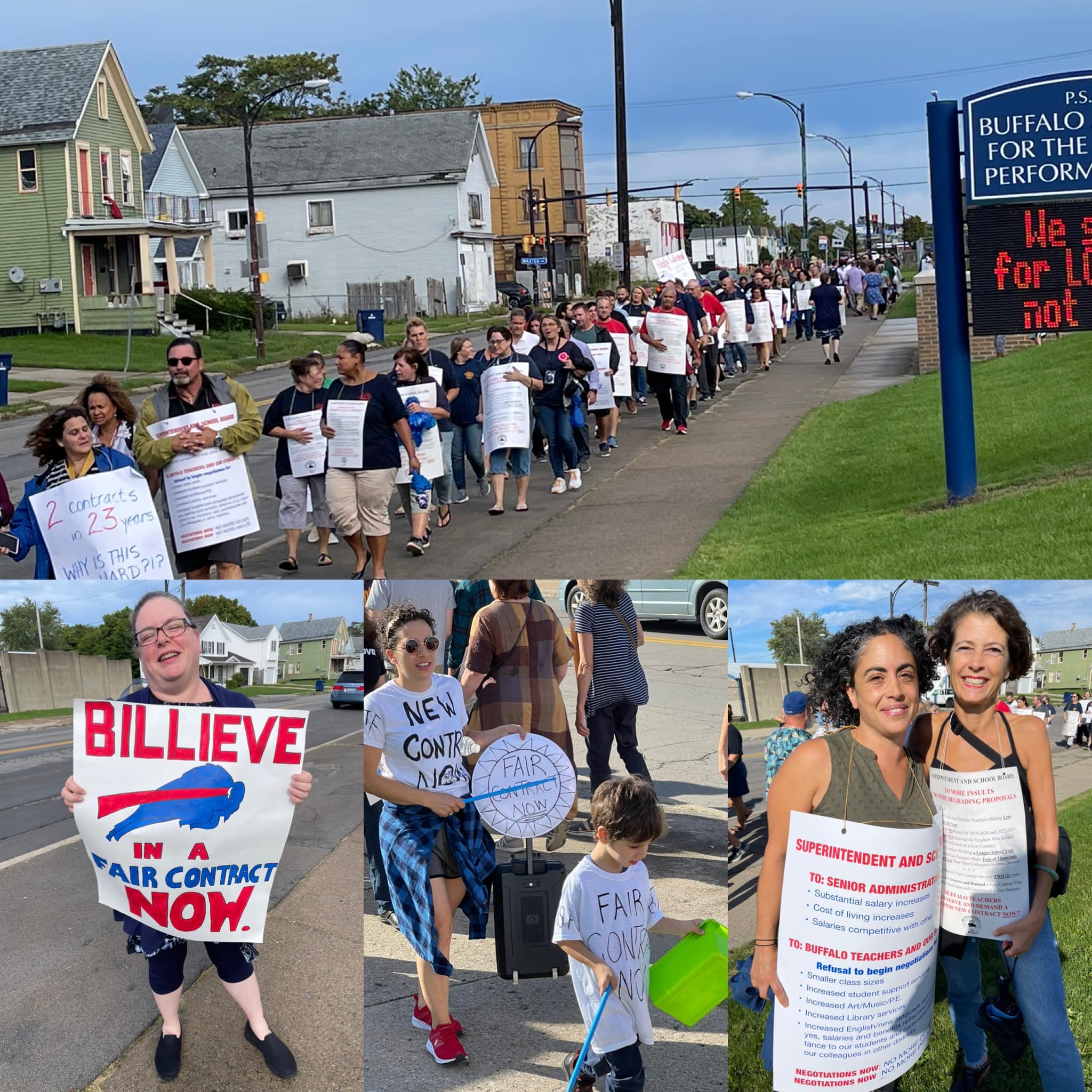 WNYLaborToday.com Editor’s Note: In the WNYLaborToday.com photo collage above, more than 300 Buffalo Teachers Federation (BTF)-represented Buffalo Public School Teachers picketed before the Buffalo School Board’s meeting that was held on Wednesday (September 21st) at Buffalo’s School for the Performing Arts.  Afterwards, BTF President Phil Rumore demanded the Board bargain a new contract within the next two weeks or the BTF Executive Board and its Membership would issue a No Confidence edict in regards to the Board and its Superintendent, Tonja Williams.  On September 25th, it will mark three years that the current contract between the School District and the BTF expired.  Rumore tells WNYLaborToday.com all the Board has done is “delay, delay and delay” and that Buffalo’s Public School Teachers are “very angry.”  (WNYLaborToday.com Photos)

(BUFFALO, NEW YORK) – Becky Moda and Mel Holden were two of the more than 300 Unionized Buffalo Public School Teachers who walked a picket line on Wednesday (September 22nd) outside the Buffalo Academy for Visual and Performing Arts (Public School 192), just before their Union’s President was to address a School Board meeting where he gave the Board an ultimatum: face a vote of no confidence from the Union and its nearly 3,800 Members if a new contract is not negotiated within the next two weeks. 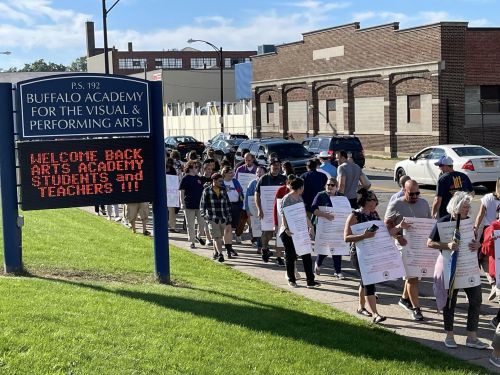 Moda (a 10-year Art Teacher, pictured below on the left) and Holden (a 20-year Librarian, pictured below on the right) - who are both employed at City Honors/College Preparatory Public School 195, told WNYLaborToday.com they are “absolutely frustrated” about the lack of a new contract (it’s been nearly three years since the current agreement expired) and are “so ‘poorly paid they are embarrassed.’” 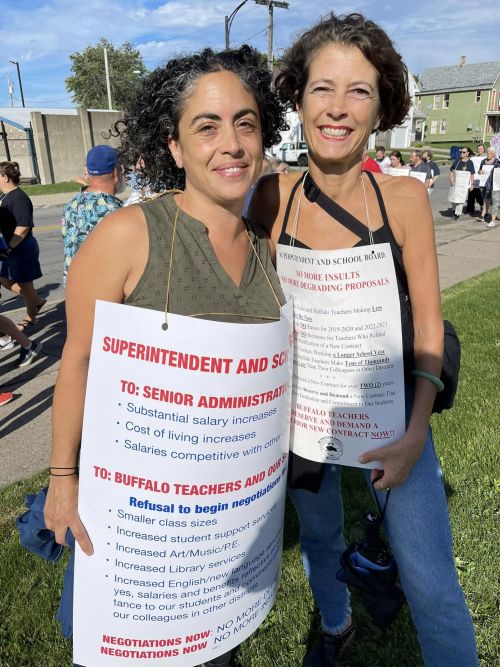 “‘We make the (Schools) go because we show up every day and yes, I am absolutely frustrated.’  I have a brother who works in the (suburban) Sweet Home School District and he makes ($20,000) ‘more than I do,’” said Moda, who paused and then added: “There was ‘no’ toilet paper in our (school’s) bathrooms today.” 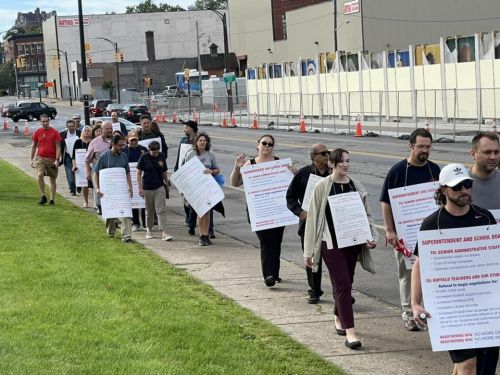 “We live in the City of Buffalo ‘and we believe in our City,’ and we are ‘IN LOVE’ with our kids, ‘but we are so poorly paid that I am embarrassed,’” said Holden, adding that Teachers in the Suburban Orchard Park School District “make ($30,000 to $40,000) more’ (a year than Buffalo’s Public School Teachers do).”

“And you know what, we get ($6) ‘per kid, per year’ (to purchase) library books (for the schoolchildren in her school),” she said. 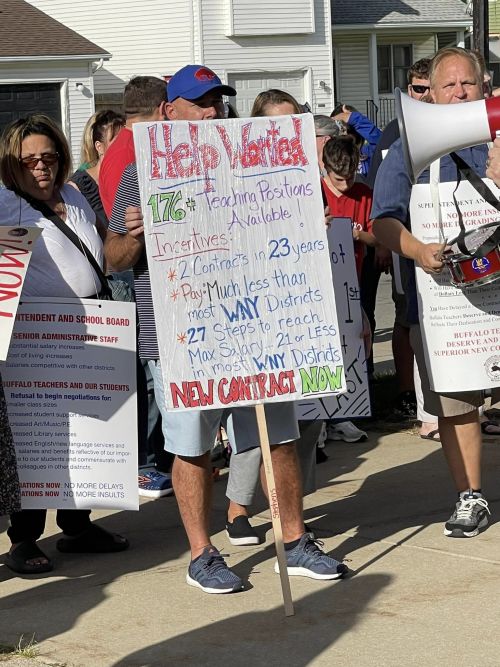 A 19-year English Teacher (pictured below) named Liz took advantage of the early season fan fever over the NFL’s Buffalo Bills to deliver her own message to the Board, using a charging Bills’ logo on a sign she held with the words: Billieve In A Fair Contract Now. 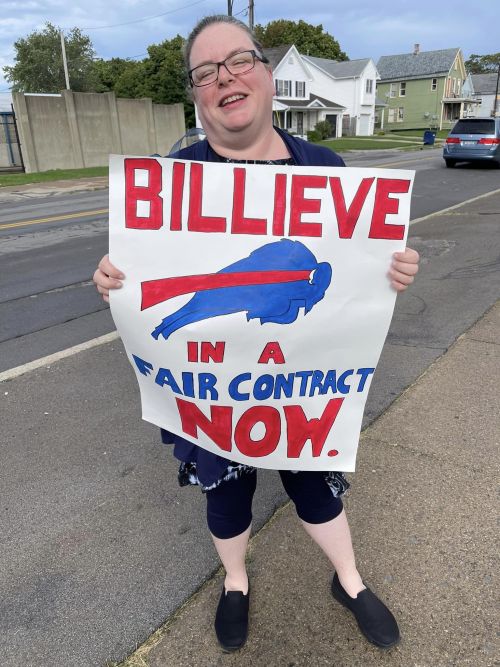 She told WNYLaborToday.com: “Teachers ‘have worked hard and it is fair for the District to compensate us.’  ‘We’re not asking for anything they cannot do.’  ‘We worked through the (Coronavirus) Pandemic and we put ourselves at risk and for the District to not be willing to work with us is nothing more but a slap in the face.’” 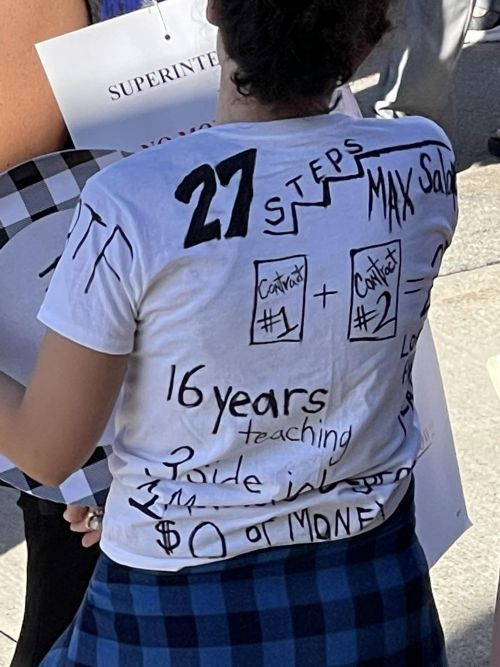 The three Teachers are Members of the Buffalo Teachers Federation (BTF), whose President - Phil Rumore (pictured below), was ecstatic by the turnout at the picket: “‘If there was any doubt about the solidarity of Buffalo’s Teachers, let them take a look at this.’” 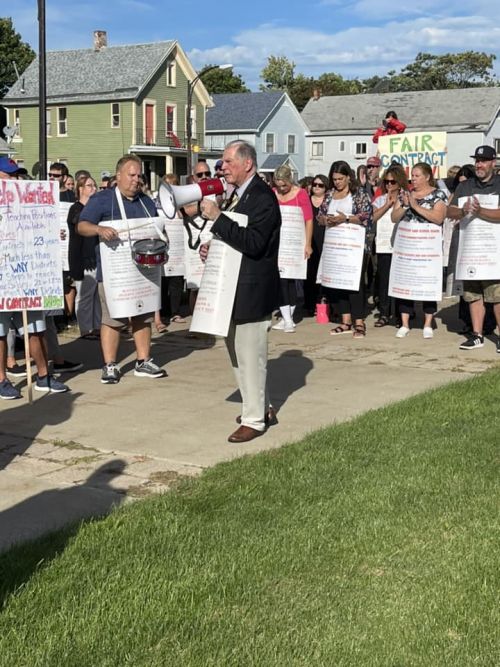 “These are the ‘most dedicated’ Teachers ‘and they are not being treated well,’” Rumore said.  “Our contract expired three years ago and ‘no progress’ (on negotiating a new deal) has been made (over the course of time).  ‘It’s been nothing but delay, delay, delay.’  ‘The bottom line is, the Board – and not their negotiators at the table, who bear the responsibility for getting this done.’  ‘So no more listening.’  ‘No more fake’ promises.  ‘Enough is enough.’  ‘While we have confidence in the Superintendent, it is the Board that is in charge of their negotiating team.’” 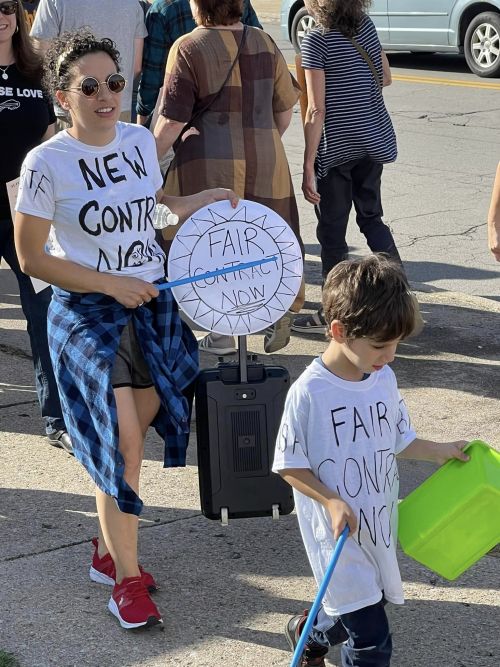 Teachers broke out in chants of What Do We Want?  A Contract.  When Do We Want It?  NOW! and Fair Contract Now! as they walked carrying signs and banging drums to the approval of a number of vehicles whose drivers honked their horns as they drove by. 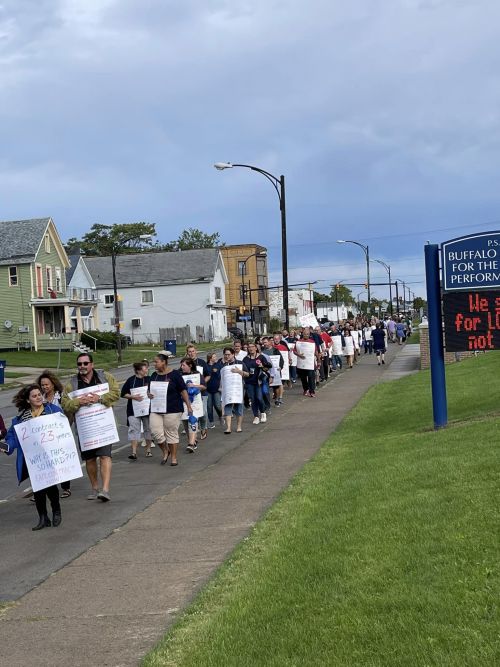 As promised, Rumore addressed the School Board that evening, made them aware of the Teacher’s frustrations and anger and issued the two-week get it done ultimatum or a vote of no confidence would be issued.

Then, in unison, Rumore and a number of Teachers who were in the auditorium where the meeting took place turned their backs on the assembled Board Members - and one by one, walked out of the room. 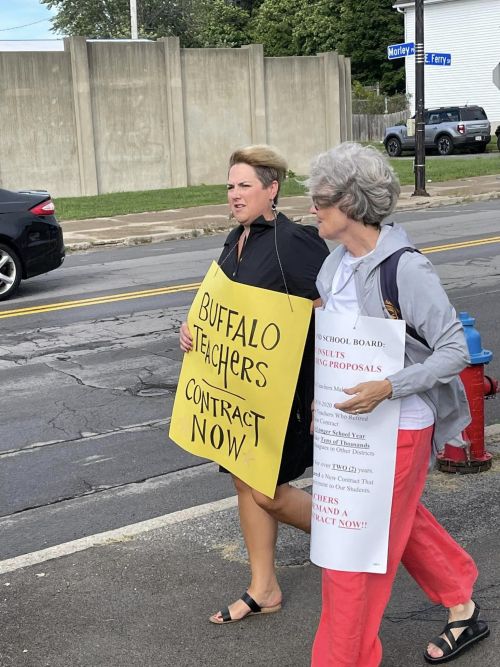 WNYLaborToday.com Editor’s Note: For More On This Labor News Report, Read: ‘Buffalo Teachers Deserve A Fair Contract’ - Union Starts Campaign To Educate The General Public & The Parents Of School Children ‘To The Wide Disparities In Pay That Impact The Retention & Hiring Of’ Public School Teachers In The City At www.wnylabortoday.com/news/2022/07/06/buffalo-and-western-new-york-labor-news/buffalo-teachers-deserve-a-fair-contract-union-starts-campaign-to-educate-the-general-public-the-parents-of-school-children-to-the-wide-disparities-in-pay-that-impact-the-retention-hiring-of-public-school-teachers-in-the-city/