You Have The Right To Form & Join A Union 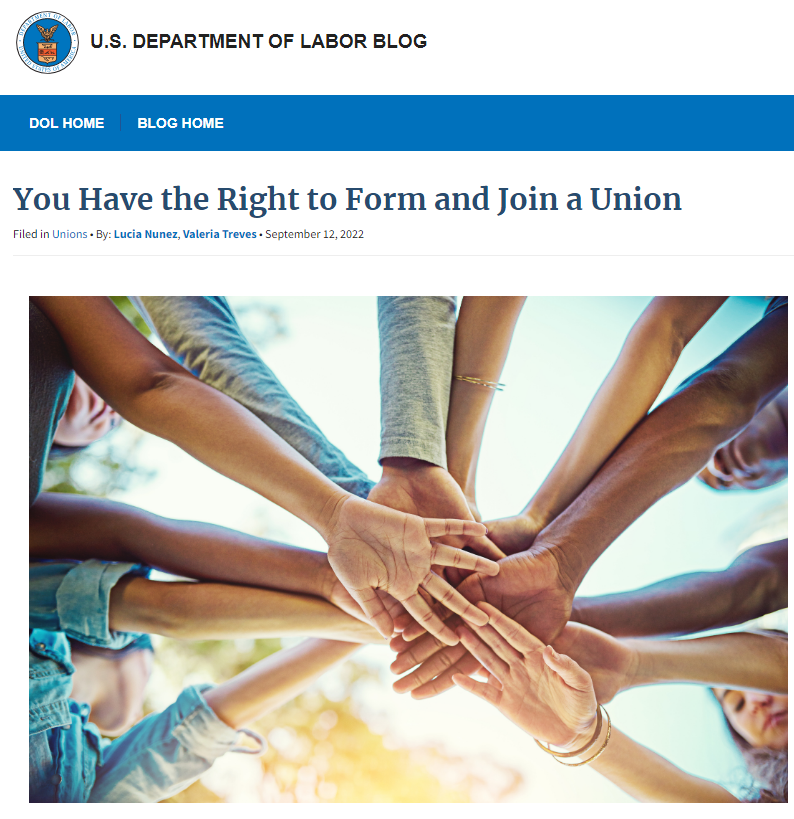 (WASHINGTON, D.C.) - Unions improve the well-being of Workers and support the mission of the U.S. Department of Labor (USDOL) in many ways - by improving job security and benefits, strengthening Labor-Management partnerships and advocating for safer workplaces.

In short, Unions have major economic benefits for Workers and families.

On that note, the USDOL has launched the You Have the Right to Form and Join a Union Campaign, an effort to inform people of their right to organize a Union.

Most Workers in the Private Sector, with some exceptions, have the right to form and join a Union.

Unions are for every Worker in every sector, from Teachers to Retail Workers to Engineers and more.

As part of this campaign, the USDOL is sharing two new resources that it hopes will help Workers understand their right to form a Union:

The Worker Organizing Resource and Knowledge Center (WORK Center), developed by the USDOL as part of the White House Taskforce on Worker Organizing and Empowerment, is a brand new one-stop shop to learn: Who has the right to form a Union; The process for forming a Union and negotiating a contract; The Union Advantage in pay, benefits, health and safety, pay equity and more; and What your employer can and cannot do during a Union Organizing effort.

And Worker.gov is a newly-updated website about all major Workplace Rights and your right to not be retaliated against when exercising them, including: Organizing a Workers’ Committee or a Union; Voicing safety concerns; and What to do if you think you may be facing retaliation.

There is also a workplace concerns feature that allows you to learn about your rights and how to report or address the issue.

For More, Directly Access This Labor News Announcement At: https://blog.dol.gov/2022/09/12/you-have-the-right-to-form-and-join-a-union