In The Aftermath Of A Memberâs âHorrificâ On-The-Job Vehicle Crash, NALC Branch 3 âStands Out As An Example Of What A Union Does For Its Members - More Than Just A Representative Labor Organization That Negotiates Contracts Or Files Grievancesâ 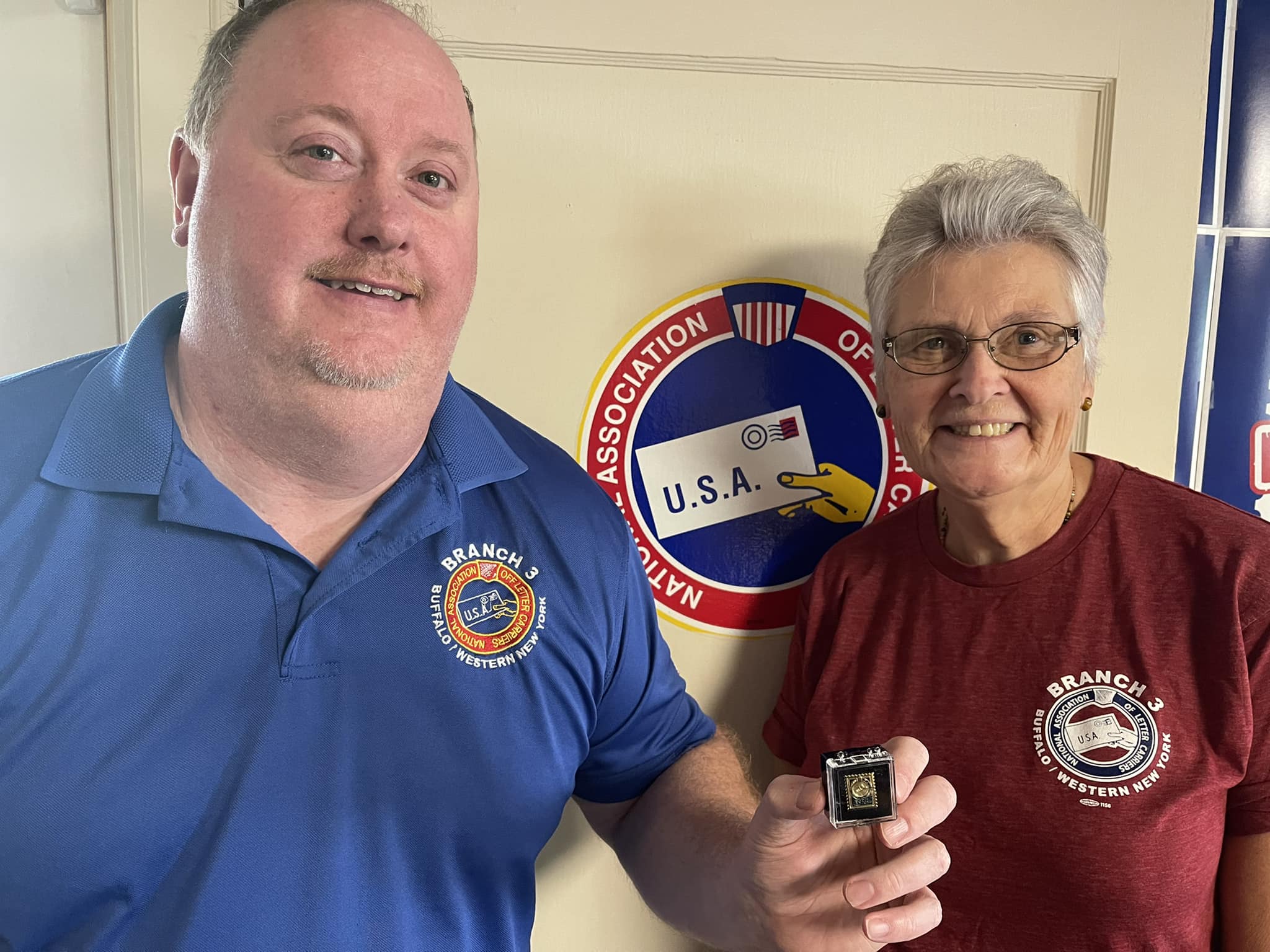 WNYLaborToday.com Editor’s Note: Pictured above, National Association of Letter Carriers (NALC) Branch 3 President David Grosskopf, Jr. and Judy Kersten - Branch 3 Insurance Representative and U.S. Department of Labor’s Office of Workers’ Compensation Programs (OWCP) Expert, hold up a 35-year Member’s pin that will be presented to local Letter Carrier Michelle Brooks, who is recovering from severe and life changing injuries she suffered earlier this year while delivering mail on her route in the Buffalo Suburb of Williamsville.  Grosskopf and Kersten recently met with WNYLaborToday.com to discuss what their Union has done and continues to do on behalf of Brooks and her family.  (WNYLaborToday.com Photo)

(BUFFALO, NEW YORK) – For far too many in the Labor Movement, Unions are thought of as just a Labor Representative that a Member pays their dues to, one that negotiates their contract or files grievances against an employer on their behalf.

But a Union does more than that.

In February (2022), Branch 3 Member and Suburban Williamsville Letter Carrier Michelle Brooks - who was just 90 days away from retirement after nearly 35 years, was horribly injured in what has been described as the most severe motor vehicle accident in the history of the United States Postal Service (USPS) in the Buffalo Region by local NALC Representatives.

Brooks’ was driving her Postal LLV (Long Life Vehicle) when it was rear-ended as she made a left-hand turn.  The severe, life changing injuries she subsequently sustained in the collision were a result of being pinned under the weight of her 3,000-pound vehicle after it was struck by another vehicle that was traveling in excess of 50 mph.

“There were ‘no’ skid marks.  ‘The driver of the vehicle didn’t try to stop,’” NALC Branch 3 President David Grosskopf, Jr. tells WNYLaborToday.com. 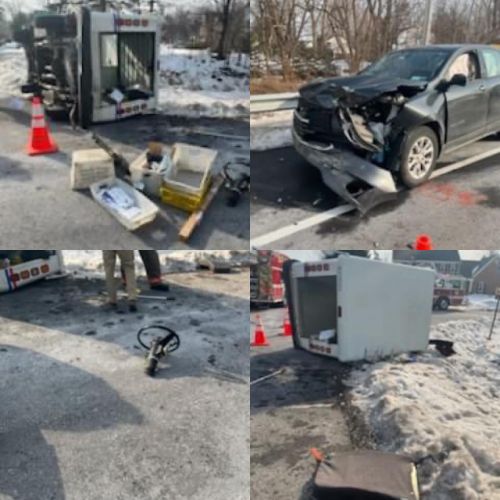 Brooks had to be extricated by First Responders (who at first did not know there was anyone under the vehicle) - who had to cut through the vehicle’s steering wheel mechanism to get to her.

Brooks was then rushed to the Erie County Medical Center (ECMC), where medical officials said her right arm had been dismembered.  In addition, she broke a number of bones, cracked a number of ribs and bruised her lungs, Grosskopf said.

“Currently her treatment is going to ECMC on a daily basis for ‘multiple ‘doctor appointments,” Grosskopf said.  “I speak with her family members on a weekly basis, tracking her progress.  ‘She’s still in a lot of pain and she’s going to physical therapy on a daily basis due to the dismemberment.’  The family ‘is reconfiguring their home in order for things to be easier for Michelle to do things independently.’  Her son tells me ‘her attitude is good.’”

Brooks sent a message of thanks to her fellow NALC Branch 3 Union Brothers and Sisters for all that they have done for her and her family: “Thank you all for the cards, flowers, and gifts!  I have a long road ahead, but I am ready to work hard and get better.”

But the story does not end there.

Unbelievably, when the incident happened, it was Grosskopf who tracked down Brooks’ family members after the USPS had no other contact information for her - other than a cell phone number.  Grosskopf personally drove to Brooks’ home in the Buffalo Suburb of Lancaster, where he found Brooks’ sons and made them aware of the accident.

“I received a call from the USPS.  Initially my reaction was ‘OMG, I hope she’s alive,” Grosskopf recalled.  “(The USPS) was ‘in a panic as they did not have emergency contact information for their Employee and were reaching out to the Union in hopes we had some.’  I was informed of the ‘initial severity’ of the accident by a Letter Carrier in another station.  I checked NALC’s records ‘and we only had’ Michelle’s contact information.  I immediately sent out messaging to my Carriers in the field, asking ‘if anyone knew how to contact the family.’  Within minutes I got a call and was provided with (her) husband’s cell phone number.  I ‘immediately’ called it, but it went to voice-mail.  I then got in my vehicle and drove to her home in Lancaster.  As I pulled up, ‘it just so happened Michelle’s two sons were coming out of the house.’  I identified myself and ‘was the first person to tell them what had happened and that they needed to get to ECMC.’”

Grosskopf took the time to thank Amherst Carrier Dave Reinhardt for contacting him so quickly in order for the NALC to respond so swiftly, as well as Cheektowaga Carrier and Branch 3 Sergeant-at-Arms Zeb Robson for providing critical contact information relating to Brooks that allowed Branch 3 to quickly to contact her family - and to NALC Branch 3 Williamsville Steward Nicole Novosat-Marasco, who rushed to the scene of the incident and reported back.

“The USPS and NALC ‘were able to respond quickly because Union Members, even in other stations, were paying attention and relaying information to the Branch in ‘real time,’” Grosskopf said.  “‘Everyone should be proud of the quick response and assistance provided in such a severe situation.’  ‘This is what being a Union Member means and being part of the Postal Family.’”

Brooks’ Union Family also responded on yet another front, quickly helping to raise $6,000 for the Brooks Family.  In addition, Brooks’ Station’s Co-Workers were also taking home cooked meals to the family’s home so the Brooks would not have to worry on that front.

Grosskopf also thanked Branch 3 Executive Vice President Mike Levering and NALC National Business Agent Mark Camilli for subsequently taking the time to reach out to the rest of Branch’s 3 Members to underscore and reinforce the importance of safety protocols and procedures - including the wearing of their seat belts while operating any postal vehicle.

But that’s not where the help from NALC Branch 3 for Brooks stopped.

Enter Judy Kersten - Branch 3’s Insurance Representative and the U.S. Department of Labor’s Office of Workers’ Compensation Programs (OWCP) Expert with more than three decades with the NALC, who continues to assist the Brooks’ Family in getting all the needed information and filling out and filing the necessary Workers Comp paperwork so the Brooks’ Family could focus on what needed to be done with Michelle.

“‘Thankfully, it was a good thing that we got her claim accepted, even though you still have to jump through hoops’ (getting it all done),” Kersten told WNYLaborToday.com.  “Our Union is a ‘benevolent organization too and we try to go above and beyond what we are required to do.’  Her situation was that with her injuries, ‘there was no (income) coming in, so it was more than just that - it was an economic hardship too.’”

“‘Simultaneously,’ Branch Three was assisting Michelle’s lawyer with information, providing policy and answering questions about the USPS as a lawsuit is going to filed against the driver who rear-ended Michelle at such a high rate of speed while she was properly and lawfully attempting to make a left hand turn - and against the USPS, ‘to a lesser degree,’ as LLV’s ‘do not have many crash prevention systems like modern vehicles which may have lessened her injuries had she been in a modern vehicle,’” Grosskopf said.

“‘I wish I could do more for her,’” Kersten told WNYLaborToday.com.  “I’ve spoken to her and ‘she says she’s getting better, but these are pretty catastrophic’ injuries.  ‘It will be a long haul and she is still struggling.’  She’s be going to see doctors and therapists ‘and there will be no prosthetic (for her arm) until her injuries are healed.’”

Looking back, Grosskopf summed it all up: “Unions ‘are here to help our Members.’  NALC ‘got critical’ contact information ASAP ‘from one of our own’ and NALC ‘was the first to notify the family of the accident.’  Then NALC went to the station ‘to implore Carriers to give emergency contact information to their employer in case of a severe accident or injury.’  NALC ‘also handled the injury for the Employee while assisting the family’s lawyer.’  Her Station’s Co-Workers and helped provide meals ‘for weeks, post-accident.’  And NALC raised ($6,000) to assist the family with medical bills ‘and we continue to help Michelle navigate the (Federal) DOL/OWCP to make sure she receives the necessary medical care.’”