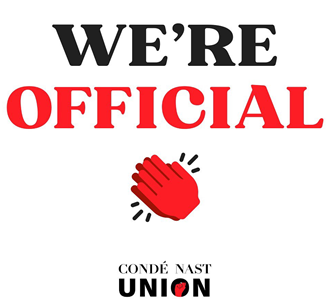 (NEW YORK CITY) - Condé Union Members have won their card count and now officially have been recognized as a Union.

As such, they say: the era of “prestige paying the bills” is over.

This card count is the formal recognition of our Union, though we’ve been acting like one since day one.

Our 500+ Members and our 15K public petition supporters have helped us reach this milestone.

After 5+ months of relentless organizing efforts, our card count showed that we reached a supermajority of Condé Employees who have signed on to our Union.

We won in a landslide!

Most excitingly, our Permalancers who have been at Condé for over a year now have official Union protections.

The incredible @newyorkerunion paved the way for this win!

But while winning a card check and being voluntarily recognized is a massive victory, it is also the beginning of the next chapter of our fight: bargaining.

We’ve fought hard to get to this point, and every last Employee deserves to celebrate our historic accomplishment of unionizing Condé Nast.