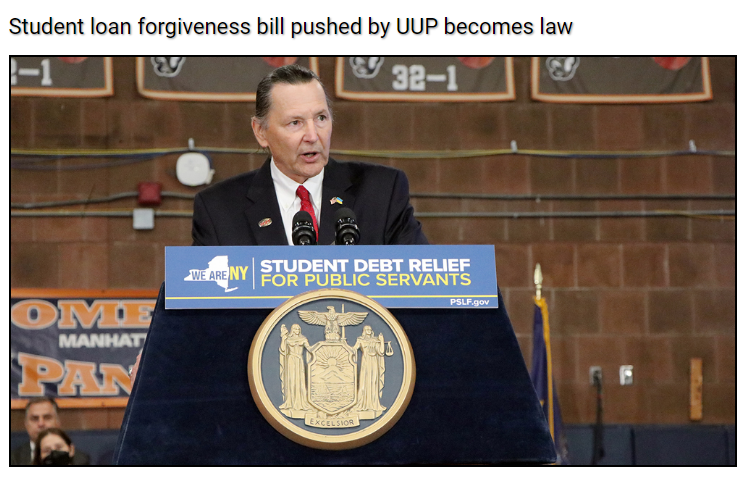 UUP was one of the strongest, most vocal proponents of the Bill, which gives full-time employment status to Public Employees who work at least 30 hours per week, qualifying them for the PSLF Program.

The employment status change only applies to the PSLF Program access.

Hochul signed the law during a ceremony that was held late last week at the Borough of Manhattan Community College in New York City.

Said Kowal (pictured above): “This is, without a doubt, an historic occasion.  We are taking an important step forward because this legislation reaches out to those who have been burdened by student debt through no fault of their own.  Believing in the promise of higher education, those who will benefit from the expanded Public Service Loan Forgiveness Program undertook the education that they did because they believed it would improve their lives, the lives of their families and their communities.  Due to the skyrocketing cost of higher education, far too many have been left with unjust burdens on their financial situations.  The law that Governor Hochul signs means the process of loan forgiveness is simplified, it is streamlined and expanded to those who need this help the most - the thousands of Part-Time Faculty who teach our students in the most difficult of circumstances and are compensated with barely livable salaries.”

PSLF is a Federal Program for Federal, State and Local Government Employees, as well as tribal government and non-profit organization.

Under the PSLF, Employees who’ve made 120 qualifying monthly payments under a qualifying repayment plan while working full-time for a qualifying employer can get the remainder of their Federal Loans forgiven.

UUP has done much to help its Members get student debt reduced or forgiven through PSLF.

To Continue Reading This Labor News Story, Go To: https://uupinfo.org/communications/uupdate/220916.php