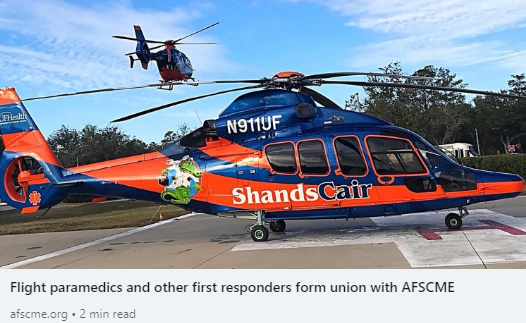 Many had also experienced the Union Difference in previous jobs or heard from their Co-Workers about how forming a Union through AFSCME would improve their lives on the job.

“We land on highways when there is an automobile wreck, go get someone on an ECMO machine when COVID-19 has compromised their heart and lung function and even fly to Mexico or the Caribbean to rescue American Citizens who have medical emergencies on their travels,” said Scott Coker, a 15-year veteran. “We do international hauling for people on their death beds and pick up transports that critical care facilities refuse to do because only we have knowledge and expertise to do them effectively.”

Despite their expertise, Coker pointed out that they remain underpaid in comparison with other local First Responders and Health Care Workers.

AFSCME Florida President and AFSCME Vice President Vicki Hall congratulated the dedicated First Responders on their efforts to gain a voice on the job through their Union.

“These brave First Responders are showing their commitment to their patients, their careers and their families by voting to Unionize,” Hall said. “Public awareness of the ‘Union Difference’ in pay, benefits, safety and security is increasing and this overwhelming show of support for forming a Union sends a strong message that Front Line Workers must be respected and valued for their immeasurable contributions.”

Coker said he and his fellow Paramedics deserve to be recognized for the unique role they play in Florida’s Health Care System: “It’s a calling that attracts a very dynamic bunch of people who get asked to do things that are very much out of the norm for the sickest population in the U.S.  We have voted to form a Union to bargain with the corporate office to recognize our skills and expertise with a fair contract and pay increases.”