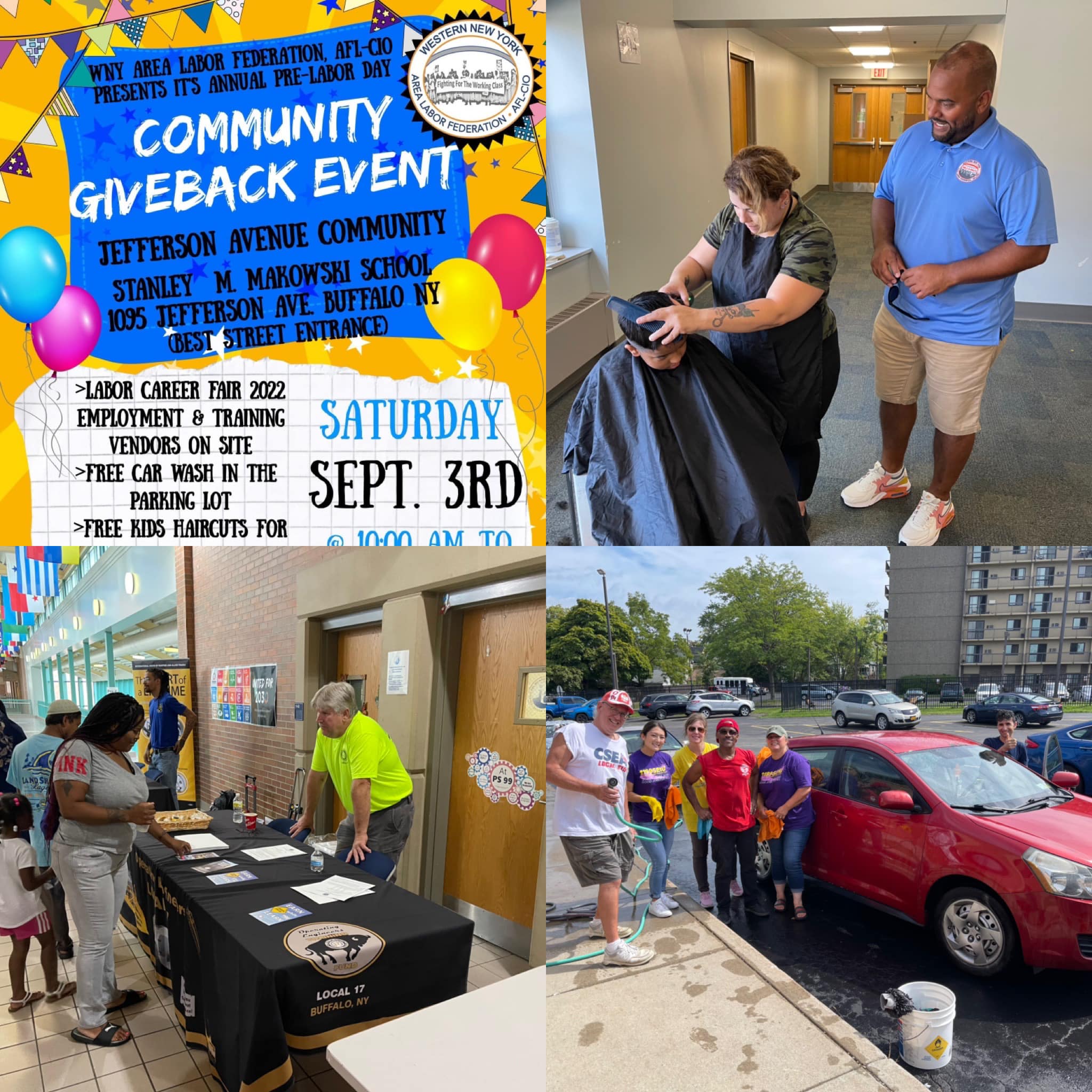 WNYLaborToday.com Editor’s Note: Organized Labor in Western New York banded together over the weekend, just a couple of days before its annual Labor Day Parade, to give back to the Jefferson Avenue Community on Buffalo’s East Side, where on May 14th 10 people were murdered and three others wounded at a Tops Supermarket by a white supremacist.  A number of Unions and Union employers held a very successful combination job fair and car wash, as well as providing free haircuts for school-age children and satchels containing a $10 Tops Supermarket gift card, at the Stanley M. Makowski School - located just down the street from the grocery store.  (WNYLaborToday.com Photos)

(BUFFALO, NEW YORK) – In the aftermath of the horrific murder of 10 and wounding of three others at a Tops Supermarket on Buffalo’s predominately Black East Side back on May 14th by a white supremacist, the area’s Labor Movement wanted to do something special for the local community, but also wanted to wait a respectful period of time so it could do so without the glare of the national media that blanketed the neighborhood for several weeks thereafter.

So the leadership of the Western New York AFL-CIO Area Labor Federation (WNYALF), its Affiliated Member Unions and the Buffalo AFL-CIO Central Labor Council decided to meet and discuss how best Organized Labor could help those living in the Jefferson Avenue Community who needed more than just the emotional support and food services following such a heinous crime.

So on Saturday (September 4th) - just two days before Buffalo’s annual Labor Day Parade was scheduled to be held, a host of Union Leaders and Representatives set up shop at the Stanley M. Makowski School - located just down the street from the Tops Supermarket, to conduct a Community Giveback Event where a Labor Career Fair (with employment and training vendors on site), free haircuts for children heading back to school and gift packs, which included a $10 Tops Supermarket gift card, were provided to those who attended the event. 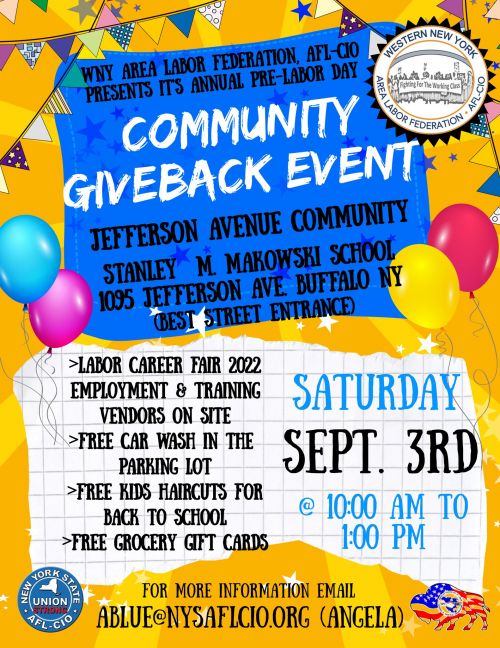 And when it was over, more than 200 neighborhood residents had come through the front doors of the school to take advantage of what Organized Labor had to offer. 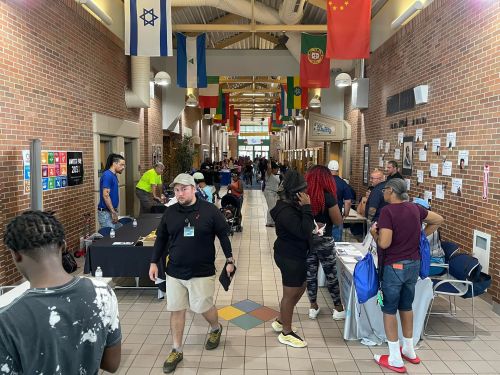 “‘It’s a part of who we are and who we’ve been,’” WNYALF President Peter DeJesus (pictured below watching a youngster get one of those free haircuts) matter-of-factly told WNYLaborToday.com, adding that it was WNYALF Staffer Angela Blue and Civil Service Employees Association (CSEA) Labor Relations Specialist Deb Mueller who were instrumental in making the event go. 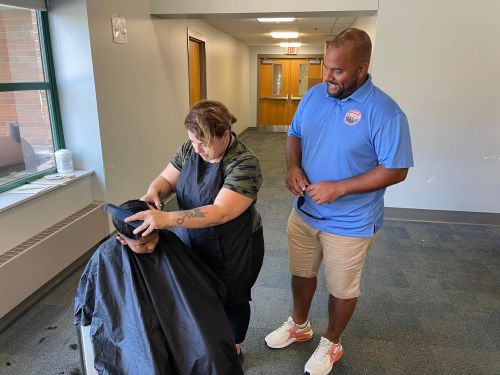 “‘We are the community and this is a small gesture of our appreciation.’  ‘And it was crucial’ this event took place ‘in this’ community.  ‘And you can see the smiles on the people’s faces’ (of those from the Jefferson Avenue Community who came to the event).  ‘This lets me know we’re doing the right thing,’” he said.

And several area Union Employers - including the Erie County Medical Center, also had representatives in attendance to provide information.

“I’m ‘super happy’ (with the way the event has been received,” CSEA’s Mueller (pictured below) told WNYLaborToday.com.  “It’s (Labor’s) ‘way of giving back to the Jefferson Avenue Community.’  ‘It’s more than providing food services, its Union jobs that have a lasting impact when their can afford to buy their groceries - on their own.’” 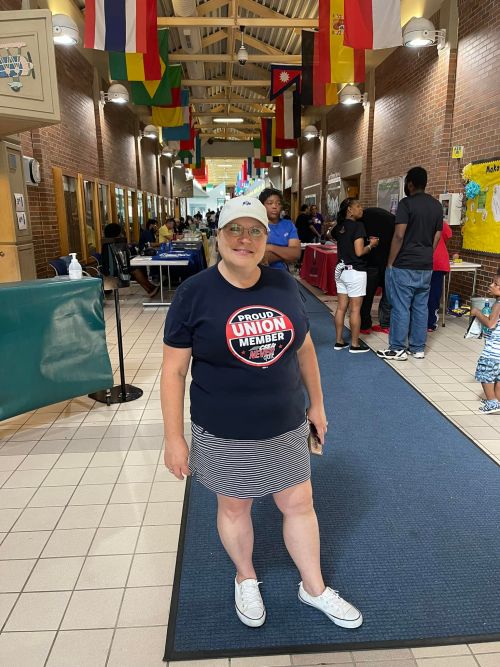 The WNYALF’s Blue said: “‘I’m amazed’ (by the turnout).  On Labor Day Weekend, ‘where we get to highlight our own accomplishments, it is absolutely mind-blowing, fantastic to give back to this neighborhood.’  After (5/14), ‘we knew that we had to be here’ in the Jefferson Avenue Community ‘and we wanted to do something after the national media left.’  ‘We’re doing what Labor does best.’  ‘Now, the people are taking advantage of what the employers have who are here.’  ‘It’s really a beautiful feeling to help provide good, sustaining Union jobs with good wages.’  ‘We’re shining our light, bright.’”

As a disc jockey spun tunes in a nearby room where parents waited for their children to get their haircuts, CSEA Local 815 President Denise Szymura and International Brotherhood of Electrical Workers (IBEW) International Representative Julie Cosenza were behind a table, handing out a small bag with several items, including a $10 Tops Supermarkets gift card. 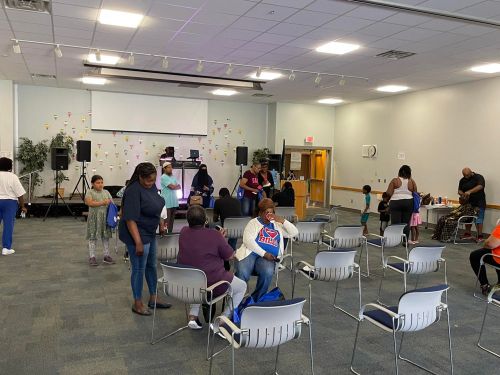 “This is a ‘great way’ for the Labor Movement to give back,” Cosenza (pictured below, on the left with Szymura).  “‘And it is more than appropriate that this is happening on Labor Day Weekend.’  ‘The opportunities for much-needed employment that we’re providing families to these bags and gift cards - there’s something here for everyone.’” 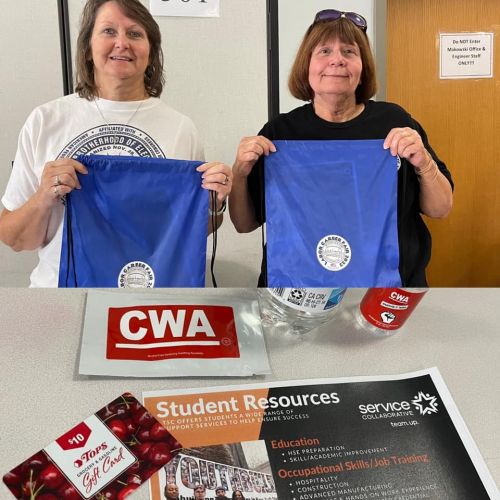 In the hallway, WNYLaborToday.com spoke to several Labor Leaders who manned the abovementioned tables: 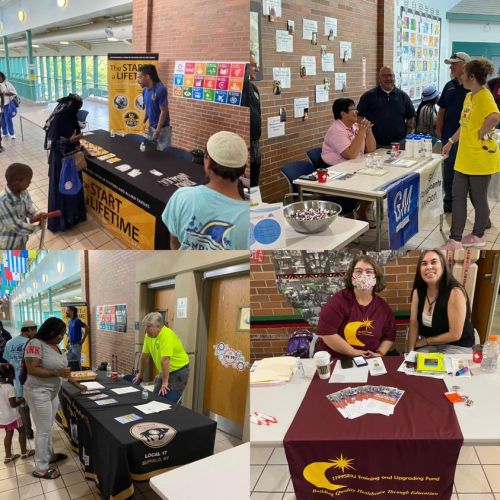 IUOE Local 17 Business Manager Gary Swain: “It’s a ‘great event to give back to this community and I don’t know of a better way to do it as we celebrate Labor Day Weekend.’”

Bakery, Confectionery, Tobacco Workers and Grain Millers' International Union (BCTGM) Local 36G President Anthony Barker: “‘This is great and I’m hopeful it turns into something bigger (over the course of time).’”

Buffalo AFL-CIO Labor Council President Denise Abbott, who was part of a Union Team that washed area residents’ vehicles for free outside the school, said: “‘This is incredible and it’s a great day’ for Labor.  ‘I feel very proud.’  ‘We should do these kind of events more often.’” 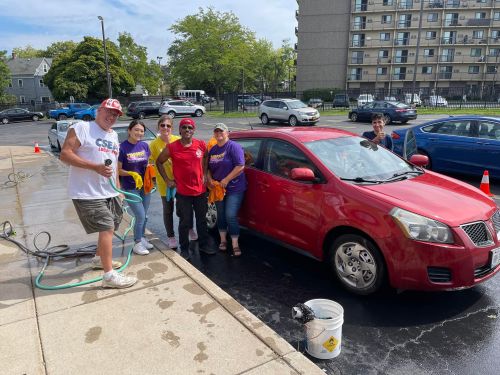 Great article WNYLaborToday.com! Thanks for coming out to this Organized Labor event in the community. Posted by Steve Szymura on September 5, 2022 at 6:51 am