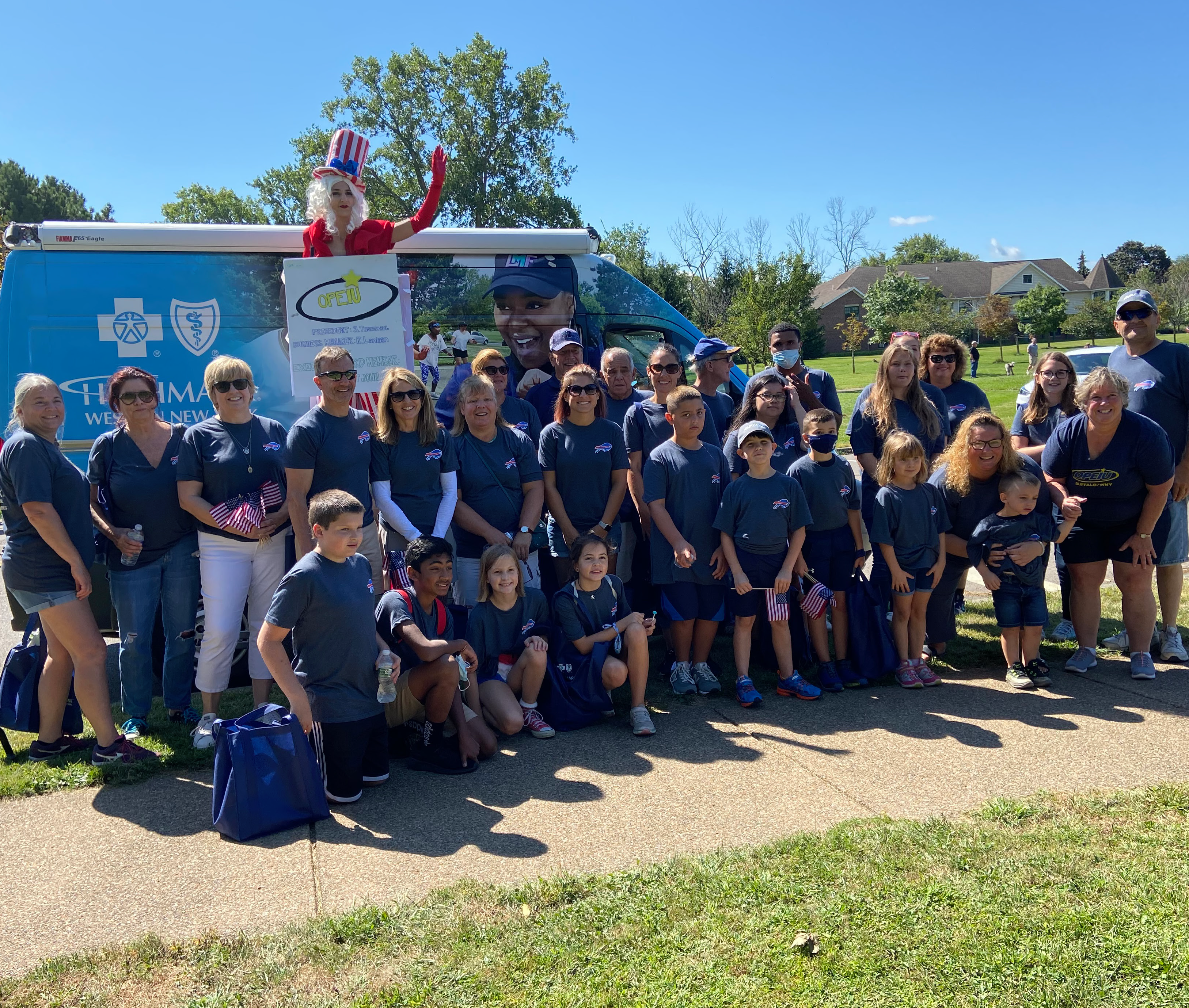 WNYLaborToday.com Editor’s Note: Pictured above, Highmark/Blue Cross Blue Shield of Western New York Representatives get ready to march in the annual Buffalo AFL-CIO Central Labor Council’s Labor Day Parade that was held in South Buffalo last year.  Buffalo Labor Council President Denise Abbott recently heaped high praise on the Union-represented Health Care Provider, which is a major sponsor of the yearly parade, telling WNYLaborToday.com: “‘We would not be able to have such an event without them.’” (Highmark/Blue Cross Blue Shield of Western New York-Provided Photo)

For the most part, sunny skies and warm temperatures have greeted those Unionists, Friends of Labor and supportive Elected Officials who gather at the crossroads of Dorrance Avenue and McKinley Parkway as they all line up amid an armada of decorated cars and floats that eventually make their way along the trek to Cazenovia Park, where a very large and catered picnic is held to celebrate the gains made by Working People across the region.

But little thought is given by those who participate and watch the massive undertaking on the city’s streets of what really goes in to making it a success on a yearly basis.

However, Buffalo AFL-CIO Central Labor Council President Denise Abbott, knows exactly why the Labor Day Parade has persevered and grown over the years when it comes to Organized Labor receiving the participation and monetary support that makes it happen.

“Highmark/Blue Cross Blue Shield of Western New York is the sponsor of our Labor Day Parade ‘and we would not be able to have such an event without them.’

(Highmark/Blue Cross Blue Shield) has a great group and (the Health Care Provider’s President) Dr. (Michael) Edbauer and his team - they ‘are all’ fantastic.  ‘They’re easy to work with’ and they march with us in the parade.

If (the Buffalo Labor Council did not receive such funding), ‘it would probably just be the parade, because it would be difficult to put together such a day that is for the Labor Movement’ - ‘and it certainly would not be what it is without Highmark/Blue Cross Blue Shield.’

‘We would still do a parade, but not at the large size it’s grown into.’

We receive ‘sizable’ sponsor funding (from Highmark/Blue Cross Blue Shield of Western New York) for our post-parade picnic that allows it to be catered.’

‘Honestly without such support, we could not do it.’”

Made aware of Buffalo Labor Council President Abbott’s had so say, Highmark/Blue Cross Blue Shield of Western New York President Dr. Michael Edbauer told WNYLaborToday.com: “That was ‘very kind’ of her ‘and we’re appreciative of her comments.’  ‘We are even more committed to doing it.’  ‘We’re happy to help’ by sponsoring it.”

“‘We could just write a check every year, but that’s not what our relationship (with the Labor Movement) is all about,’” he told WNYLaborToday.com.

That Union knowledge has proven to be invaluable for a President who’s Health Care System insures nearly 150 clients that represent Union Members, including more than 50 Union/Building Trades Organizations.

In fact, Highmark - which is headquartered in Pittsburgh, has more than 5,000 Unions as clients, which allows Highmark to serve one million people in the Labor Movement.

And, officials in the past have described that fact as “significant,” noting there are more than 4,475 Union-represented Employees across the Highmark Health footprint and that its Organized Labor-based clients have a combined Union Membership of 359,000.

In addition, Highmark has also said in the past that it recognizes the importance of honoring existing Collective Bargaining Agreements, including the one it has with Office and Professional Employees International Union (OPEIU) Local 153, which represents more than 400 Highmark/BCBSWNY Employees who’ve worked at its Downtown Buffalo Headquarters.

Back in May, OPEIU and Highmark/BCBSWNY announced agreement on a new three-year contract that featured an overall 6% wage increase and work-from-home provisions that was preferred by its Union-represented Workforce, which performed at a high level during the Coronavirus Pandemic making sure clients had what they needed.

Asked what he intended to tell area Union Leadership and their Members when Highmark/Blue Cross Blue Shield of Western New York participates in the Buffalo Labor Day Parade with a number of their Representatives marching along with Unionists, Edbauer answered: “We’re ‘really excited to be there, but first, I want to thank them for what they do.’  ‘I also want to listen to what they have to say, what their needs are and get the best feedback I can so we can make modifications’ (to what Highmark/Blue Cross Blue Shield of Western New York offers).  ‘We want to stay in step with them and provide the benefits they need.’”

And as the fourth-largest overall Blue Cross Blue Shield-affiliated organization in membership, Highmark and its Blue-branded affiliates cover the insurance needs of more than 5.6 million members in the States of Pennsylvania, Delaware and West Virginia.

Traditionally, the weather has been extremely good over the years.

“We’ve been ‘very lucky’ weather-wise,” she said, adding: “‘When it’s all over, we’ll leave there thinking - Damn, we did a good job, again.”

(For More On This Year’s Buffalo Labor Day Parade, Read WNYLaborToday.com’s August 29th Labor News Story, Headlined: “We Are Inspired By You” - Four UFCW-Represented Tops Supermarket Employees Who Were Impacted By The 5/14 Mass Shooting At The Jefferson Avenue Grocery Store Are Named Grand Marshals Of The 2022 Buffalo AFL-CIO Council’s Labor Day Parade At www.wnylabortoday.com/news/2022/08/29/buffalo-and-western-new-york-labor-news/we-are-inspired-by-you-four-ufcw-represented-tops-supermarket-employees-who-were-impacted-by-the-5-14-mass-shooting-at-the-jefferson-avenue-grocery-store-are-named-grand-marshals-of-the-2022-buffalo-afl-cio-council-s-labor-day-parade/)