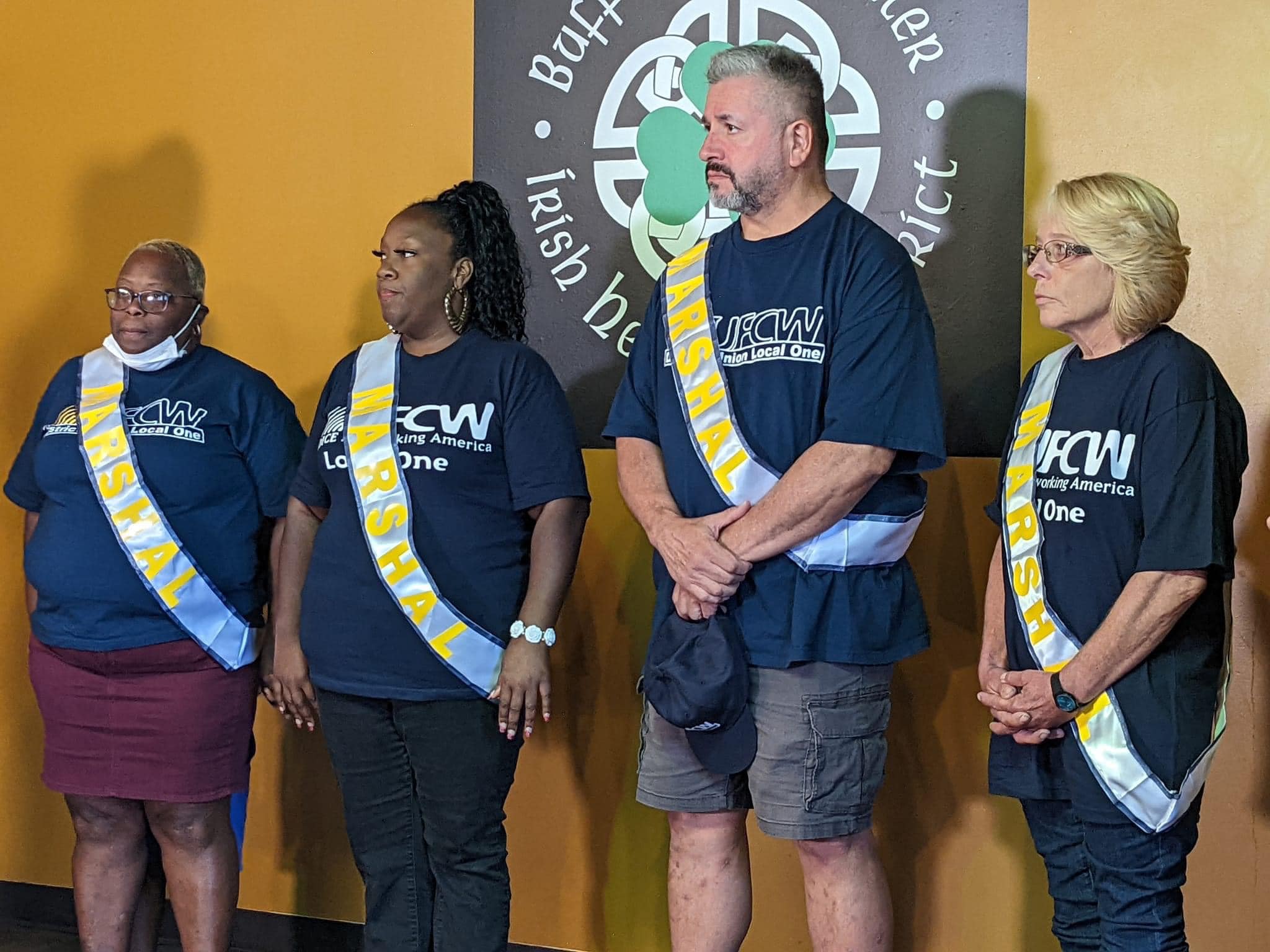 WNYLaborToday.com Editor’s Note: Pictured above from left to right, Lorraine Baker, Latoya Harris, Carl Sepulveda and Rose Marie Wysocki - all United Food & Commercial Workers Union-represented Tops Supermarket Employees were named as this year’s Grand Marshals of the Buffalo AFL-CIO Central Labor Council’s Labor Day Parade, which will take place on Monday, September 5th.  The four, who were all impacted by the mass shooting at the Tops Supermarket on Jefferson Avenue in mid-May, were praised by Buffalo Labor Council President Denise Abbott for their “dedication and bravery - (which was) nothing short of commendable.”  (WNYLaborToday.com Photos)

(BUFFALO, NEW YORK) – When the annual Buffalo AFL-CIO Labor Day Parade takes place one week from today (on Monday, September 5th), there will be not one – but four very special Grand Marshals leading Unionists through South Buffalo.

The 2022 Parade Marshals are all Jefferson Avenue Tops Workers, Members of the United Food & Commercial Workers (UFCW) who were impacted by the mass shooting that took place on Buffalo’s East Side on May 14th, where a white supremacist killed 10 and wounded three.

The four who will lead the parade are Lorraine Baker, Latoya Harris, Carl Sepulveda and Rose Marie Wysocki.

In announcing the formal sashing event, the Buffalo Labor Council said: In reflection of the May 14th tragedy, the Buffalo Central Labor Council wants our fellow Union Members from the UFCW to know that they have the Union Community standing strong with them. However, it will be their strength that will lead us this year during the parade. 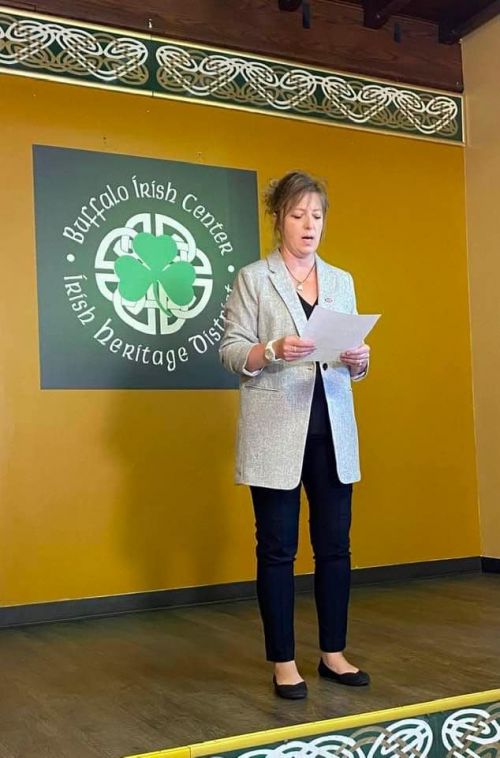 Buffalo Labor Council President Denise Abbott (pictured above) said the following during the ceremony that was held last week at the Buffalo Irish Center on Abbott Road:

“Labor Day is a time to reflect on our progress as Working People, a day to celebrate our achievements and a tribute to those who work, in every field, every job, none too big or too small.

It is our day to show the importance of the work we do that helps make our communities a better place to live in and work in.

When the Parade Committee sits and discusses who we think best represents us, we usually look at someone that’s close to retirement, someone who’s done years of service for the Labor Movement, someone who has made a lasting impression on the Labor Community, someone whose contribution has helped make our community a better place and lifted our Workers up.

Without hesitation, our Committee felt that no greater contribution was shown than that of the courage, strength and commitment from our United Food and Commercial Workers from the Jefferson Avenue Tops Grocery Store.

The tragedy that occurred on May 14th, 2022 changed the lives of the community and our city - but none more than our Sisters and Brothers of the UFCW, who are that community.

The tremendous loss they, their families, friends and Co-Workers suffered is immeasurable.

I can’t imagine what they have been through or what they are continuing to go through, but I know that their dedication and bravery is nothing short of commendable.

Nelson Mandela said: ‘Courage is not the absence of fear, but the triumph over it.  The brave man is not he who does not feel afraid, but he who conquers that fear.’

This year’s Marshals are a perfect example of this.

Thank you to Mark Manna, Area Director of UFCW Region One, with helping me with the Marshal process and for all his hard work during this past year.

It is my pleasure to introduce the Buffalo Central Labor Council 2022 Labor Day Marshals:

After a round of applause, Lieutenant Governor Antonio Delgado (pictured below) - who was in town for an event and stopped by to offer his congratulations to the four, saying: “Thank you for what you represent - your work ethic, dedication, commitment, value set, love and your sense to the community.  What you have endured takes a lot of love.  Governor (Kathy) Hochul and I understand the work (Organized Labor does) and your right to collectively bargain.  We are inspired by you.  I’m honored and humbled to be in your presence.  And to your Brothers and Sisters in Labor, Thank you for what you do.” 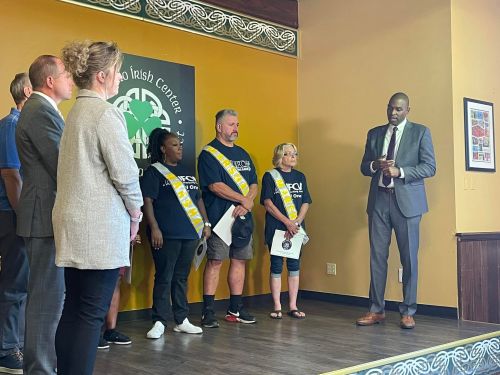 The four Tops Workers appeared to be a bit overwhelmed to find themselves in such a spotlight.

Speaking with WNYLaborToday.com after the sashing event, Baker said she was “honored” to be a Labor Parade Grand Marshal.

Sepulveda, who is a UFCW Steward at the Jefferson Avenue Tops, said: “I’m ‘very proud’ to be a Union Steward.”

Wysocki said: “I am ‘proud to be part of my Union Family.’  ‘They bring us together.’”

The Council’s 2022 Labor Day Parade is scheduled to start at 12 noon, followed by its picnic, which is sponsored by Highmark/Blue Cross Blue Shield of Western New York, at the end of the parade route at Cazenovia Park Casino.

Kennedy presented the Tops Workers with official state proclamations that recognized and congratulated them for being Grand Marshals of the Labor Day Parade.

WNYLaborToday.com Editor’s Note: For Further Background, Read Your On-Line Labor Newspaper’s May 25th Labor News Story, Headlined: A Conversation With United Food & Commercial Workers Local One President Frank DeRiso On The May 14th Racist Shootings At A Tops Supermarket In Buffalo: “‘It Makes You Sick.’ ‘I Cannot Fathom That People Can Be So Hateful.’” At www.wnylabortoday.com/news/2022/05/25/buffalo-and-western-new-york-labor-news/a-conversation-with-united-food-commercial-workers-local-one-president-frank-deriso-on-the-may-14th-racist-shootings-at-a-tops-supermarket-in-buffalo-it-makes-you-sick.-i-cannot-fathom-that-people-can-be-so-hateful./