âThis Is A Huge Win For Workers At Ascend And For The Labor Movement In New Englandâ - Boston Ascend Dispensary Workers âGo Unionâ With The Teamsters, Are The First In New England 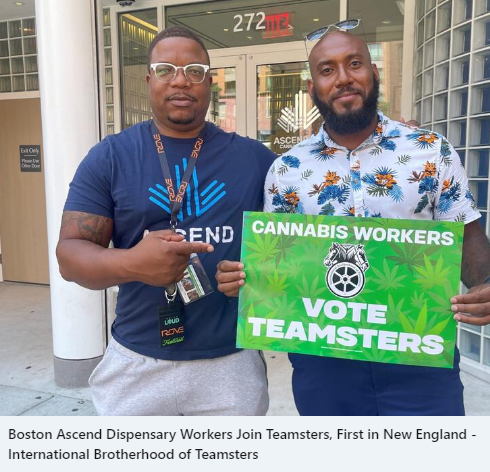 (BOSTON, MASSACHUSETTS) – Workers at Ascend in Boston have voted - overwhelming, to join Teamsters Local 25, becoming the first Cannabis Dispensary in New England to organize with the Union.

The win in Boston is the latest victory for the Teamsters amid of wave of Cannabis Workers organizing with the 1.2-million-Member Union.

The win also marks a major victory in the Teamsters’ continued effort to raise wages and benefits in the Cannabis Industry across the country.

“This is a huge win for Workers at Ascend and for the Labor Movement in New England,” said Teamsters General President Sean M. O’Brien. “Right now, the Cannabis Industry is one of the most lucrative industries out there, with companies pocketing billions of dollars.  Cannabis Workers in Boston and across the Nation deserve fair wages, to be treated with respect and to have a voice on the job.”

Teamsters Local 25 President Tom Mari echoed O’Brien’s call for dignity on the job at Ascend: “The Teamsters are the strongest and most well-positioned Union to protect Cannabis Workers, in Boston and beyond.  We’re tough, militant, and dedicated to standing with workers at Ascend to get them strong contracts like the Teamsters have in so many industries.  This will mark the first cannabis contract in Boston, but it is far from the last.”

Peter Finn, who serves as Teamsters Western Region Vice President and Director of the Teamsters Food Processing Division, said the Union will continue to advocate for those in the industry: “Our goal is to ensure cannabis jobs turn into careers.  This is a great organizing victory Boston, but our fight doesn’t end there.  We are welcoming new members in the Cannabis Industry nationwide and we’re ready to safeguard these workers and their families.”

To Directly Access This Labor News Story, Go To: https://teamster.org/2022/08/boston-ascend-dispensary-workers-join-teamsters-first-in-new-england/