âWalking In The Footsteps Of A Labor Legendâ - IUOE Local 17 Business Manager Gary Swain Is The New President Of The Jamestown Central Labor Council, âPraisesâ Outgoing President David Wilkinson Of The IBEW âFor All Heâs Done For Laborâ 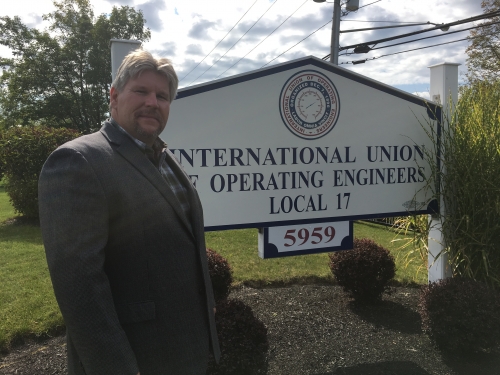 “I ‘love’ that man.  Dave’s ‘done an outstanding job for a lot of people.’  ‘If you wanted something done or happen’ in Jamestown, he was ‘the guy,’” Swain (Pictured Above/WNYLaborToday.com File Photo), said of Wilkinson during a recent interview with WNYLaborToday.com.

“He ‘made me feel at home - like I’d been there forever,’” said Swain, who’s previously served as First Vice President of the Jamestown Labor Council.  “Dave ‘kept the Labor Council going (over the years) and I did not want to see it (fade).’  They were looking for someone to succeed him ‘and my thought was that I would step up.’  ‘It’s not that I needed to throw another log on the fire’ (with all the responsibilities Swain already has with Local 17) - ‘hell no, but I did not want to see all the hard work Dave put in go to waste.’  ‘That’s why I stepped up.’  ‘Now, I feel as I’m walking in the steps of a Labor Legend.’”

Swain is a resident of Machias in the Southern Tier who’s been a Member of Local 17 - which has 1,800 Members who work across nearly seven of Western New York’s eight counties, for the past 33 years.  He’s served as Local 17’s Business Manager since 2016 and also serves as an Executive Board Member/General Vice President with the Western New York AFL-CIO Area Labor Federation.

Wilkinson (Pictured Below/WNYLaborToday.com File Photo) has served as Jamestown Labor Council President since 2014, overseeing its affiliated Member Unions in the Private and Public Sectors and the Building Trades, which combine to represent more than 7,000 Members.

Wilkinson had been a Member of IBEW Local 106 for 37 years and served as its Business Manager for the past 15 before making the decision to retire.

“Gary’s a ‘good leader and I think he has the ability to move our Labor Movement forward,’” Wilkinson told WNYLaborToday.com in a telephone interview.  “He ‘won’t back down and there’s a lot of confidence in him’ (from others within the Southern Tier Labor Movement).  He and his Union ‘always show up and he brings his Members with him.’  ‘If I asked him to bring twenty people, he’d bring thirty.’  ‘He’ll do the hard work and work to bring in new Members to our meetings.’  We’re in a rural community ‘and that’s hard - he’s got his work cut out for him.’”

“One of my ‘main goals’ is to have discussions with (Dunkirk Labor Council President) Don Williams ‘on combining forces to get more people in the Labor Movement to participate.’  ‘If we can, we can make our county whole and focus on helping create good Union jobs, organizing Non-Union Workers by educating them on the benefits of being a Union Member and look at getting more young people involved in the movement, now that young Workers employed at places like Starbucks and Trader Joe’s are organizing,’” he said.

“Unions, ‘right now, are a hot topic,’” Swain continued.  “And ‘there are a lot of unorganized Workers out there who need to know that if they band together they can get the kind of wages and benefits they deserve.’”

Wilkinson, meanwhile, is proud of the legacy he leaves behind during his years serving as President of the Jamestown Council, including what the Labor Movement in Chautauqua County did to save the NRG Power Plant and the Chautauqua County Home.

“I ‘know that we saved people’s jobs when we pushed back’ and ‘we built great relationships with a number of other Unions,’” he said.  “The ‘satisfaction came as being a Worker Advocate and the reward was making sure others went to work.’”