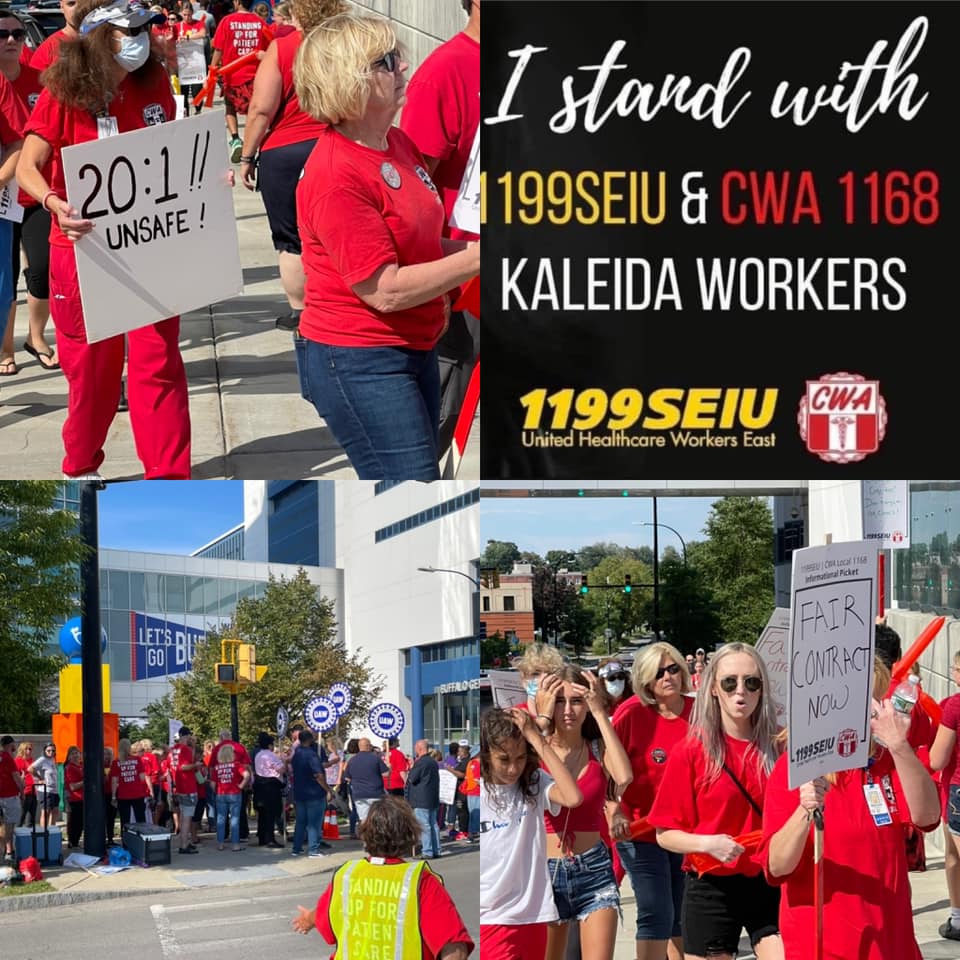 WNYLaborToday.com Editor’s Note: More than 2,000 Unionized Caregivers and Hospital Workers represented by 1199 Service Employees International Union (SEIU) and the Communications Workers of America (CWA) turned out in force late last week to participate in an informational picket that was held outside the Buffalo General Medical Center and Oishei Children’s Hospital to publicly protest the lack of a new contract for Essential Workers, as well as sound a statewide alarm over the growing problem of understaffing at medical facilities and the need to quickly address it before it’s too late.  (WNYLaborToday.com Photos)

(BUFFALO, NEW YORK) - The vocal message that a combined 2,000-plus Unionized Caregivers and Hospital Workers clad in red and purple sent was so loud, so forceful and so emotional during an informational picket that was held outside the Buffalo General Medical Center and Oishei Children’s Hospital that it reverberated across the City’s Medical Corridor.

And make no mistake about it - it was aimed at two entities: the Kaleida Health Care System and New York State Government. 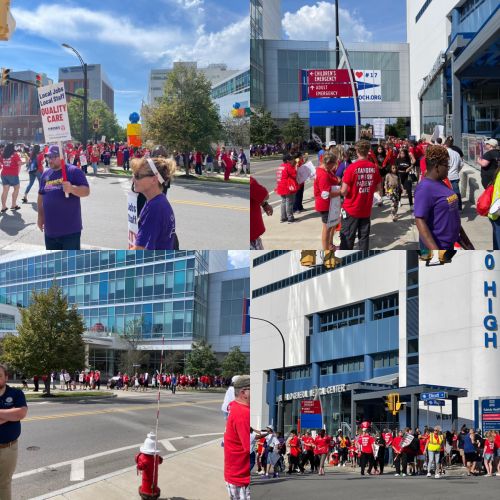 Working under an expired contract and continuing to deal with horrible understaffing - combined with a tremendous amount of Staff stress and patient pressure, those represented by 1199 Service Employees International Union (SEIU) and the Communications Workers of America (CWA) turned out in force on Thursday (August 18th) under sunny skies and warm temperatures - and their chants of When Do We Want A Contract! - Now! could be heard cascading up and down several streets surrounding Buffalo’s Medical Corridor.

But the question was: Did management at Kaleida and Governor Kathy Hochul hear them?

If not, leadership at the two Health Care Unions said they would move forward on seeking a Strike Authorization vote from their Members in order to send an even stronger message to those in power that the system is buckling and that if something substantial is not done – all hell could break loose, and soon.

“We are bargaining (a new contract, after a May 31st expiration date and two subsequent mutually agreed-to extensions) at a time of crisis,” CWA District 1 Regional Director Debbie Hayes, a Registered Nurse (RN) herself for the past 43 years, told those in attendance during a news conference held outside the hospitals.

Hayes talked about Buffalo hospitals having suffered more than their New York City counterparts, receiving less in reimbursements - which has left them failing to keep up with their growing expenses - and in some cases, forced them to stop offering elected medical procedures for prolonged amounts of time.

“Understaffing and COVID ‘has decreased our workforce and it has crippled (our) health care system and (our) hospitals.’  We are ‘demanding relief, fair wages and benefits so we can retain and attract’ a workforce.  Kaleida ‘is losing millions (because of unfair reimbursement rates) and has had to stop elected surgeries.’  ‘We need funding and new laws,’” said Hayes (pictured below). 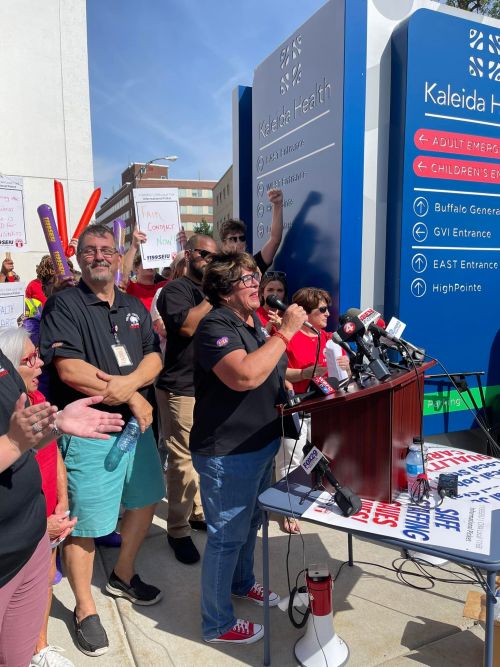 The informational picket was held following the expiration of the old contract on July 31st - which covers a total of 6,300 CWA/1199 SEIU Members, and months of bargaining.

Since the recent expiration of the second contract extension, bargaining has taken place on five days a week, Union Officials said.

One Nurse who walked the picket line held a sign that read: 20:1!! Unsafe! – a reference to the Nurse-to-Patient Ratio Caregivers are currently dealing with, a problem that they say is leading to fatigue and burnout and a disintegrating level of on-the-job morale. 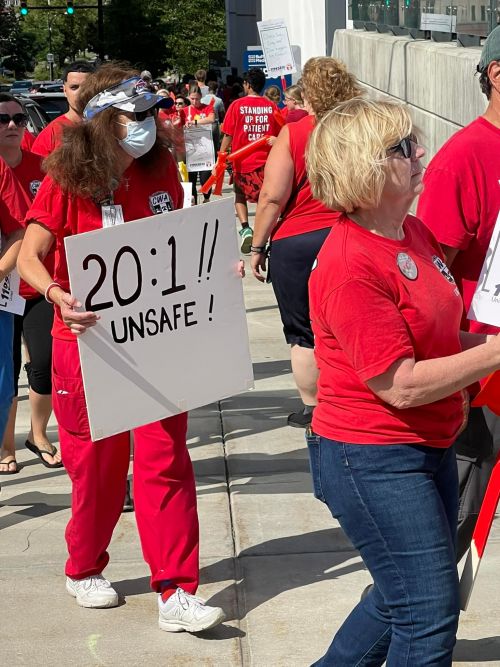 With more than 800 currently open jobs to fill - in addition to the 436 newly created positions to meet New York State’s new Staffing Law, Kaleida is now looking at 1,200 vacancies.

Jennifer Hogue, a Certified Medical Assistant at Gates Vascular, was one of several Unionized Caregivers who spoke at the news conference: “Before the pandemic, Kaleida ‘deleted’ my Certified Medical Assistant position ‘to save money.’  ‘Then they deleted more positions like mine that provided important bedside personal care to our patients.’  ‘This intensified the effects of COVID and decreased the care even more significantly at the bedside.’  ‘How can one person care for thirty patients?’  The answer is - ‘they can’t.’  ‘They can’t physically wash patients, feed patients that need assistance and change the bedding.’ ‘It is exhausting.’  Our Staff ‘needs a fair contract that not only allows the hospital to retain and recruit Staff, but makes up for the loss in the quality care we give our patients.’”

1199 SEIU’s Jim Scordato (pictured below), who serves as Vice President of SEIU’s Hospital Division, told WNYLaborToday.com before the news conference: “Five hundred (positions) were approved through (New York State) Safe Staffing (Legislation), ‘but there’s no money for them.’  Kaleida spent ($92 million) hiring Agency (traveling) Nurses in the last year - ‘that money needs to go to our Members.’  ‘It’s going to take years’ (to retain and attract the number of Caregivers to fill those open positions),” he said. 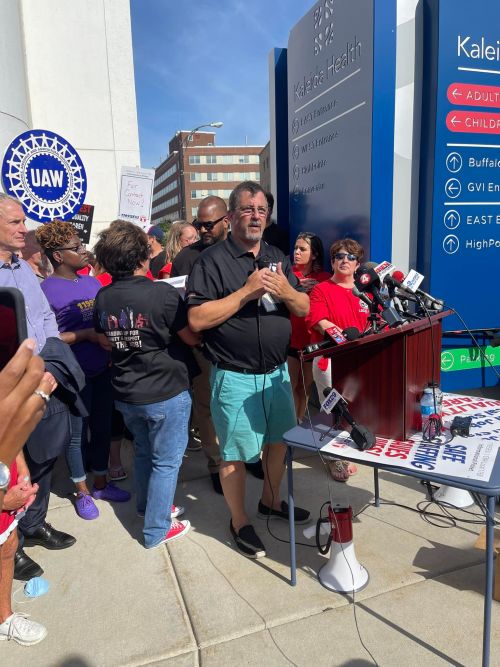 CWA Local 1168 President Cori Gambini had little sympathy for Kaleida Management or New York State while speaking at the news conference: “I’ve been bargaining contracts for (23) years ‘and I’ve never seen it this bad.’  And we are seeing it - ‘every day.’  Kaleida ‘has the responsibility to invest in its Staff.’  ‘We need to retain our loyal’ Workers.  ‘We need to work in safe’ environment.  (Staff is) ‘burned out.’  ‘They deserve respect and dignity on the job and for the work they do.’  ‘We need to reach a fair agreement - for both sides, but we will give no’ concessions.  Question is: ‘Will Kaleida force us to Strike?’”

State Senator Sean Ryan, one of several Elected Officials who were in attendance at the rally, heard their message - loud and clear, saying at the news conference: “‘What’s happened to our (Health Care) heroes?’  There’s a ‘big pot of money’ (for health care) in New York State ‘to settle’ (the problems outlined by Union Representatives) ‘and we’re going to make sure it comes back to Buffalo.’”

Ryan’s words of encouragement were met with cheers from the Caregivers and Hospital Workers who heard them, but Western New York AFL-CIO Area Labor Federation (WNYALF) President Peter DeJesus - who also serves as Political Director for 1199 SEIU here in Western New York, said: “You ‘never want to be out here (walking a picket line), but it tells you something’s wrong inside there’ (as he pointed to the medical facilities).  ‘Our ask is simple: Give us the tools to do our job and we’ll make this medical campus flourish.’  ‘We have a host of elected officials fighting for what you deserve.’  ‘We don’t want to be out here, but we won’t be standing alone.’” 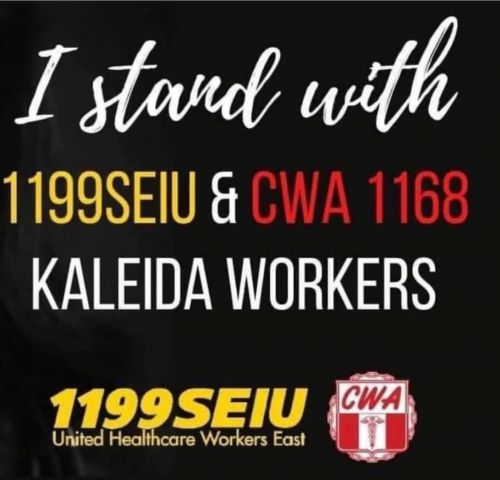 The WNYALF President’s point was underscored by a bevy of area Unions and their representatives who came out in support of the 1199 SEIU/CWA Caregivers and Hospital Workers, including the Buffalo Teachers Federation, the United Auto Workers, the United Steelworkers, the Building Trades, Starbucks United - many of whom stood in support of striking CWA Members several months ago outside South Buffalo’s Mercy Hospital in their fight for a new contract, fair wages and benefits and safe staffing ratios.

One had to wonder if Kaleida Management was watching all that was going on outside its medical facilities, as well as recalling what occurred in South Buffalo just months ago as those 2,000-plus CWA and 1199 SEIU Members marched and chanted.

By the looks of what transpired and what was said late last week, these Unionized Kaleida Employees are ready to hit a Strike line with their Union Brothers and Sisters if need be in the not too distant future.