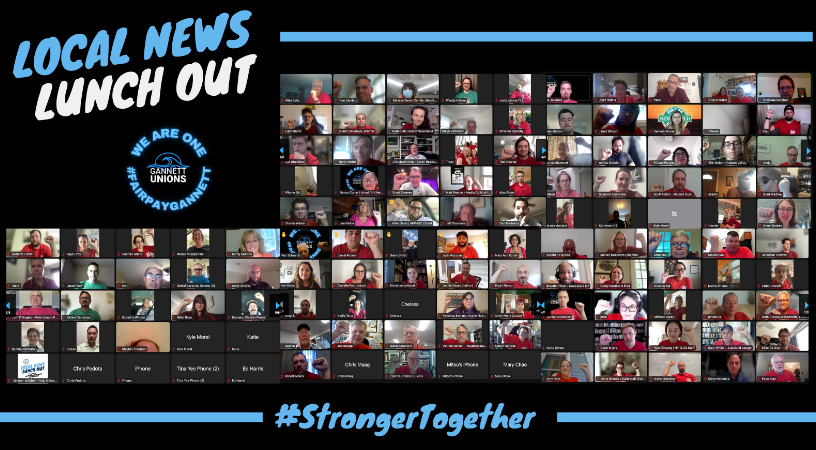 (ACROSS THE UNITED STATES) - Hundreds of Workers employed by Gannett-owned newsrooms took a coordinated lunch break in response to a string of e-mails from upper management last week that threatened layoffs due to the company’s second quarter financials.

According to Mike Reed, Chairman and CEO, Gannett must “responsibly and proactively (align) resources to our highest strategic priorities and (lower) costs to be in line with revenues.”

Unionized Gannett Journalists across the country say the financial austerity at Gannett is a result of financial mismanagement on the part of the company and cannot be solved by further staffing cuts.

Citing the pressures of the Coronavirus Pandemic in 2020, Gannett instituted layoffs and buyouts and cut 401ks.  Following these cuts, Gannett immediately awarded a 1.2 million bonus to their CFO for his “sacrifices during the pandemic” and later revealed their CEO takes home an $8 million annual salary (160 times the median salary of a Gannett Worker).

Gannett had received $16.4 million in Federal Paycheck Protection Program money, due in part to lobbying by The NewsGuild-Communications Workers of America (CWA).

The NewsGuild-CWA represents more than 50 Gannett-owned newsrooms across the country.

Over half of those newsrooms participated in the “lunch out.”

Hundreds of others gathered on Zoom to discuss next steps to fight back against the company.

Many of these newsrooms organized in the past couple of years, as huge media conglomerates like Gannett have bought up newspapers, gutted their Staff, and closed some for good.

In the last 15 years, more than 1,800 local newspapers have closed their doors.

"Gannett wants to pretend it can report on our communities with fewer Journalists while still spending lavishly on executives.  We deserve better, and our readers, equally, deserve better,” said Susanne Cervenka, who works as a Project Reporter at the Asbury (N.J.) Park Press.

“The effects of Gannett’s continued austerity decisions affect all Workers at the company, so we need to fight back together to win.  That’s why we are standing with hundreds of Gannett Journalists across the country to demand the company reinvest in our journalism.  We've said it before and will say it again: There is no local journalism without local Journalists," she said.

To Continue Reading This Labor News Report, Go To: www.nyguild.org/front-page-details/hundreds-of-journalists-across-the-u-s-take-a-coordinated-lunch-out-to-protest-gannetts-threat-of-layoffs?link_id=12&can_id=d28a0e75022b91d73fc95bc86b686390&source=email-union-matters-august-5-2022&email_referrer=email_1630012&email_subject=union-matters-august-12-2022