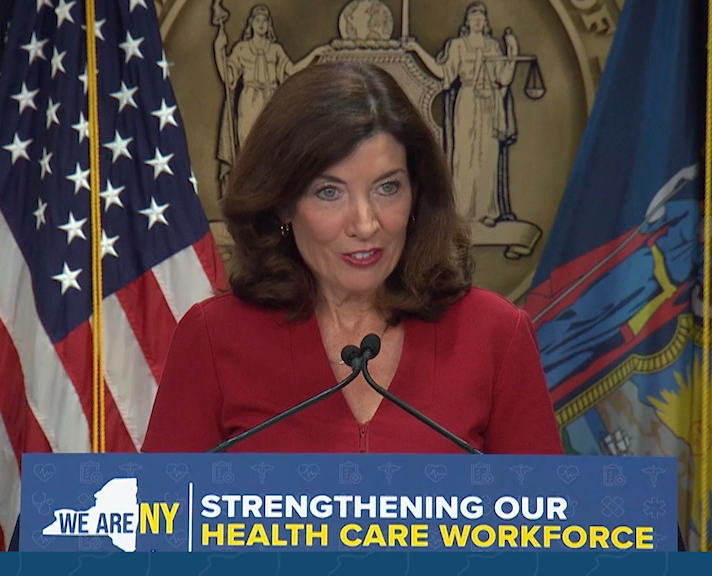 Enacted in the Fiscal Year 2023 New York State Budget, the program includes $1.3 billion allocated for the payment of recruitment and retention bonuses to certain Health Care and Mental Hygiene Workers, a key initiative in the Governor's aim to increase the State's Health Care Workforce by 20% over the next five years.

Applicants were announced as winners of the Nurses for Our Future Scholarship Program - an initiative designed to recruit and retrain Nursing and Health Care Professionals to serve as New York State Registered Nurses (RNs), which are in high demand.

"We all saw during the pandemic that there are individuals who were on the frontlines.  We talk about them, we honor them, and not all heroes wear capes.  Some of them wear scrubs.  It's time to start bolstering that workforce.  And I committed during my first State of the State Address, that we would grow our workforce by twenty-percent over the next five years.  It's ambitious, it's bold, but that's what we do," Governor Hochul said.

“We're here to announce our one thousand scholarship winners of our Nurses for the Future Program. I'm announcing that we're making good on our promise to launch an on-line portal for Health Care Worker bonuses.  This is where employers can claim bonuses for their eligible Workers.  We have identified who the eligible Workers are to make sure that ($1.3 billion) in funds are to eligible Workers who make less than ($125,000) and have remained in their positions for at least six months," the Governor said.

To Directly Access This Labor News Story In Its Entirety, Go To: www.governor.ny.gov/news/video-audio-photos-rush-transcript-governor-hochul-makes-health-care-workforce-announcement

And For More, Go To: https://health.ny.gov/health_care/medicaid/providers/hwb_program/index.htm