âDignity Threatened To Take Away Our Health Coverage, But We Stood Strong And Showed Them That We Could Not Be Brokenâ - More Than 300 Sequoia Hospital Workers Come Away From California Strike âVictoriousâ 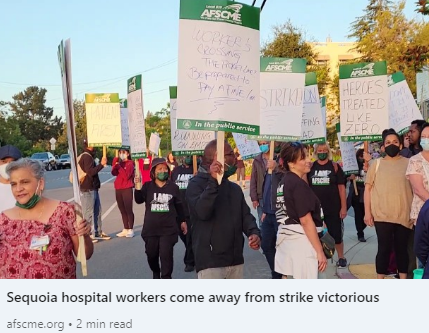 (REDWOOD CITY, CALIFORNIA) - More than 300 American Federation of State, County & Municipal Employees (AFSCME)-represented Health Care Workers employed at Sequoia Hospital in Redwood City, California – who had been on Strike since July 18 and ended it Friday (July 29th) have unanimously ratified a four-year contract with their employer, Dignity Health.

The agreement not only prevents Dignity Health from unilaterally raising health care costs, but states that any future premium increases need to be negotiated - a first within the Dignity Health system.

Workers will pay nothing for health care until 2025.

The new contract also comes with a 16% wage increase over four years, as well as a $1,500 signing bonus.

The hospital also agreed to improve staffing for Certified Nursing Assistants, which will lead to more manageable caseloads and result in better patient care.

They had voted overwhelmingly to go on Strike when four months of contract negotiations with the leadership of Dignity Health failed.

Conditions for both Workers and patients were untenable, Union Officials said.

Unsafe staffing levels prevented Workers from delivering high-quality care, compensation was below what other comparable employers were paying and Workers were facing skyrocketing health insurance premiums.

“Dignity threatened to take away our health coverage, but we stood strong and showed them that we could not be broken,” said Jackie Garcia, a Surgical Technician at Sequoia Hospital. “They promised they'd never remove the language on health premiums, but our unity won the day and they removed it.  This is a victory for the patients and the Staff who will come after us.  This is going to be a stronger, safer and better place to seek and provide care.”

To Directly Access This Labor News Story, Go To: www.afscme.org/blog/sequoia-hospital-workers-come-away-from-strike-victorious