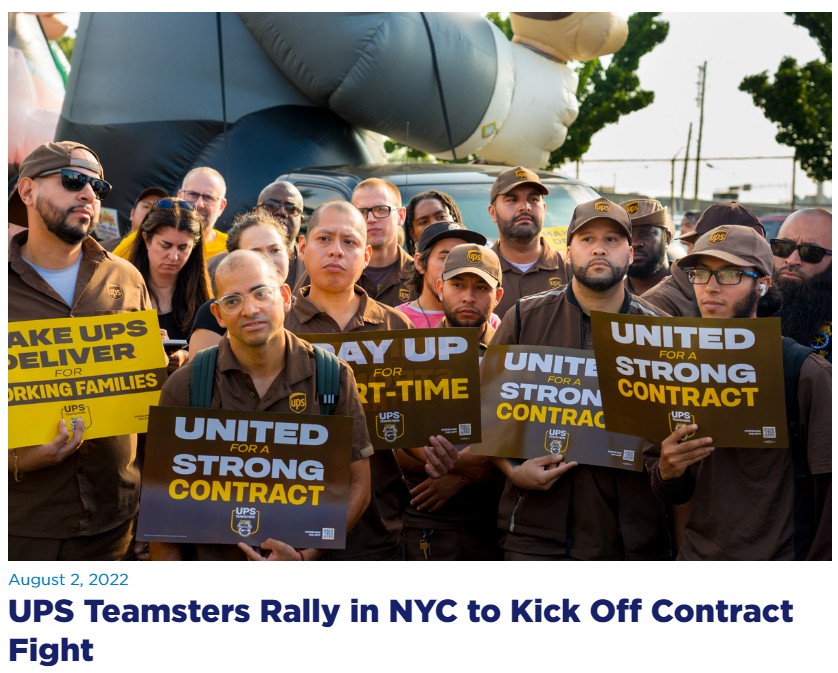 The event, which was organized by Teamsters Local 804, coincides with many similar events across the country as the International Brotherhood of Teamsters - which represents 350,000 full- and part-time UPS Workers - launched the UPS Teamsters Contract Campaign, a one-year effort to inform and mobilize Members to win the strongest possible contract at UPS.

The campaign launch comes one year before the UPS National Master Agreement - the largest Collective Bargaining Agreement in the U.S. - is set to expire on July 31st, 2023.

The kick-off of this historic contract fight also coincides with the 25th anniversary of the successful 1997 UPS Teamsters Strike, when 185,000 Members struck the company.

Beginning this week, and in the weeks and months to come, Teamster Representatives and Stewards at hundreds of UPS facilities across the country will be conducting site visits and delivering informational resources to UPS Teamsters.

“UPS Teamsters are united and ready to mobilize in the fight for the best contract ever negotiated at UPS,” Teamsters General President Sean O’Brien said. “UPS would not have its billion-dollar profits without hard-working Teamsters.  Our message to UPS is that it's time our contract reflects the essential work of our Members.  The Teamsters are resolved to win a strong contract by (August 1st, 2023) and we won’t extend negotiations by a single day.  We’ll either have a signed agreement that day or be hitting the pavement.”

UPS Teamsters delivered an unprecedented volume of packages during the Coronavirus Pandemic for businesses to run smoothly and families to safely shelter at home, and still continue to work around the clock in 10-to-12 hour shifts and under punishing conditions - like extreme heat.

To Continue Reading This Labor News Report, Go To: https://teamsters.nyc/ups-teamsters-rally-in-nyc-to-kick-off-contract-fight/