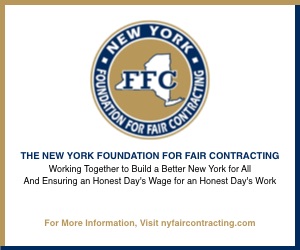 WNYLaborToday.com Editor’s Note: The New York Foundation For Fair Contracting (NYFFC) is dedicated to recovering stolen wages and holding cheating contractors accountable. Any tips, concerns or questions are greatly appreciated and can be sent to NYFFC Director Matt Kent at 716-261-7071 or via e-mail at mkent@nyfaircontracting.org.

Ask almost anyone for a definition of “theft” and you are almost guaranteed to get an answer.

Ask the same person for a definition of “wage theft” and you may be met with confusion.

By its simplest definition, wage theft occurs when an employer fails to pay an Employee for all hours worked, all tips earned or all benefits due.

Wage theft can occur in any industry, but it is especially prevalent in the Construction Industry.

The New York Foundation for Fair Contracting (NYFFC) was founded to help identify wage theft in the public construction marketplace.

In the prevailing wage or public work marketplace, wage theft can include:

In practice, wage theft can even involve schemes where Workers are paid full prevailing wages in their checks, but made to return some portion in cash back to their employer.

When the DOL acts, the office may recover unpaid wages for Workers and can penalize contractors with up to a five-year ban on government construction contracting (“debarment”).

The NYFFC routinely refers Prevailing Wage Complaints to the DOL.

As a Public Construction Watchdog, the NYFFC uses every tool at its disposal to investigate and verify the proper payment of prevailing wages.

The strongest cases, however, come directly from Workers who have been impacted by wage theft or have direct knowledge of wage theft taking place.

The NYFFC welcomes every opportunity to meet with Workers and discuss these issues and maintains strict Worker confidence in these matters.