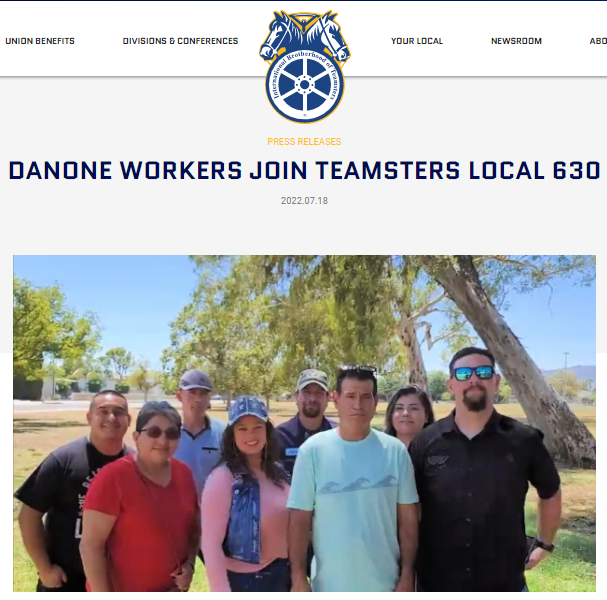 (LOS ANGELES, CALIFORNIA) – Workers at Earth Island in Chatsworth, California - a subsidiarity of Danone, have voted to join Teamsters Local 630.

The 160 Workers are responsible for the manufacturing of vegan food products.

“The Teamsters represent over one-thousand Workers at Danone, including over (250) Members right here in L.A. County in the City of Industry,” said Lou Villalvazo, who serves as Teamsters Local 630’s Secretary-Treasurer. “Workers at Earth Island want to form their Union with Local 630 because they see the strong representation, wages, benefits and protections that come with a Teamster contract.”

“Congratulations to our newest Members who stood strong and fought hard for a better workplace,” said Peter Finn, who serves as Teamsters Food Processing Division Director. “When we grow our Union through organizing, we make our Union stronger not just for new Members, but for Teamsters everywhere.”

David Davtyan, who has been a Mechanic at the Earth Island L.A. location for two years, said: “I voted for Teamsters Local (630) because I want a quality Teamster medical plan for my family, and a Teamster contract with job guarantees and protections.”