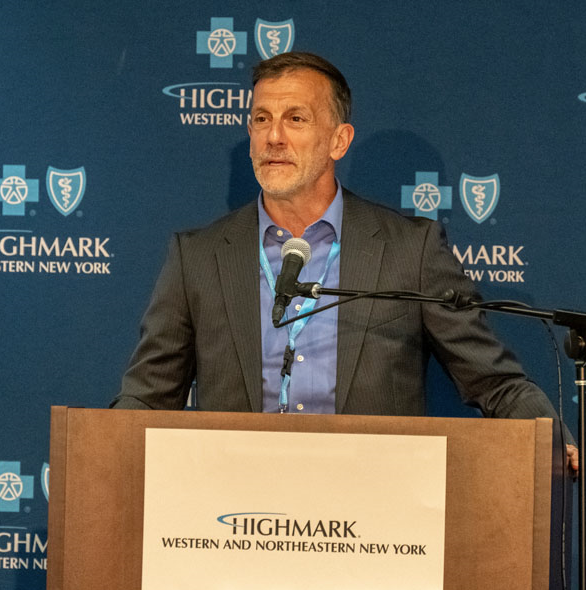 (BUFFALO, NEW YORK) – While it hasn’t been formally verified, one just might be hard-pressed to find a President of a major Health Care Provider across the entire United States that serves a vast number of Union-represented Workers who has such a unique perspective of actually being a Union Member in their life - and twice for that matter.

In fact, Dr. Edbauer had the benefit of being a Member of the United Food & Commercial Workers (UFCW) while employed during his high school days at Tops Supermarkets in Buffalo, and then again by United University Professions (UUP) at the University of New York at Buffalo, while performing his residency at Buffalo’s Children’s Hospital in the early 90s.

Today, that Union knowledge is proving to be invaluable for a President whose Health Care System insures nearly 150 clients that represent Union Members, including more than 50 Union/Building Trades Organizations.

In fact, Highmark - which is headquartered in Pittsburgh, has more than 5,000 Unions as clients, which allows Highmark to serve one million people in the Labor Movement.

And, officials from both companies in the past have described that fact as “significant,” noting there are more than 4,475 Union-represented Employees across the Highmark Health footprint and that its Organized Labor-based clients have a combined Union Membership of 359,000.

In addition, Highmark has also said in the past that it recognizes the importance of honoring existing Collective Bargaining Agreements, including the one it has with Office and Professional Employees International Union (OPEIU) Local 153, which represents more than 400 Highmark/BCBSWNY Employees who work at its Downtown Buffalo Headquarters.

Back in May, OPEIU and Highmark/BCBSWNY announced agreement on a new three-year contract that featured an overall 6% wage increase and work-from-home provisions that was preferred by its Union-represented Workforce, which performed at a high level during the Coronavirus Pandemic making sure clients had what they needed.

OPEIU Local 153 Business Agent Mark Jurenovich, who said the new deal was ratified “overwhelmingly,” added: “Our Membership is ‘very, very pleased.’  A ‘big component’ of the Membership ‘was looking for remote work, with inflation and the price of gas being what it is.’  And for the past couple of years (due to the pandemic), the (Highmark/BCBSWNY’s Downtown Headquarters Building) was (95%) unoccupied.”

Dr. Edbauer told WNYLaborToday.com during a recently-held interview that was conducted inside the Health Care System’s sprawling Downtown Buffalo Headquarters - which was built under a Project Labor Agreement (PLA) with the Buffalo Building and Construction Trades many years ago: “First off, I’m ‘appreciative of having that experience’ (being Union-represented).  ‘If I hadn’t, I wouldn’t have (personally) recognized how important it was.’  ‘I grew up in a Blue Collar Family where you went out and you got a job and did the work.’  At the University, I really had ‘no idea’ (that he was a Member of UUP, but overall) it ‘was a very helpful organization.’  ‘You know that someone has your back - and that if you have any questions, regarding your contract or negotiations or your rights, you have someone to go to.’  ‘I’m fortunate (to have had those experiences) because I’m able to share how important Union representation is.’”

“I worked in the produce department at Tops when I was in high school,” Dr. Edbauer continued.  “(The UFCW) was (a) ‘very helpful’ (Union Organization), ‘especially for a young person who knew very little about Unions.’  My Steward answered my questions, provided me with updates on (contract) negotiations and ‘helped me understand my rights’ (in the workplace).  ‘It showed me how important Union representation was.’”

Dr. Edbauer was appointed to his current position in March 2021, following the strategic affiliation of Highmark Incorporated and HealthNow New York Incorporated, where he had served as Executive Vice President, Chief Strategy and Growth Officer since 2018.

A long-tenured Health Care Executive, he previously served as President and CEO of Catholic Medical Partners (CMP) and President of Trinity Medical.

And as the fourth-largest overall Blue Cross Blue Shield-affiliated organization in membership, Highmark and its Blue-branded affiliates cover the insurance needs of more than 5.6 million members in the States of Pennsylvania, Delaware and West Virginia.

“The ‘takeaway is - I know how important it is’ (being a Union Member).  ‘The stability, how it helps you count on your future.’  ‘Your’ health insurance.  ‘Yes, that’s (part of the reason) why I paid my (Union) dues,’” Dr. Edbauer smiled as he continued describing his Union experiences during his interview with WNYLaborToday.com.  “And ‘it gives me the appreciation for the people (who are Union-represented) who do their jobs every day, so it helps put food on the table.’  ‘It also gave me a good idea of (Unions representing) people for what they do.’  ‘And that’s the way I look at it with our people’ (Employees who are represented by OPEIU).  ‘Our success and theirs should be mutual.” 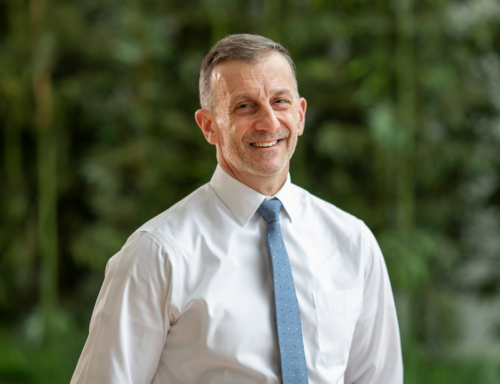 In an interview with WNYLaborToday.com earlier this year, Dr. Edbauer said: “Traditionally, (BCBSWNY) ‘has had a great relationship with Labor and we are proud to be the only’ Labor-represented Health Care Provider (in Western New York).  ‘It’s extremely important’ (their relationship with Labor).  ‘It is a true partnership, not a client-partnership.’  ‘That’s very important.’”

Buffalo/Western New York is not the only area of New York State where the Health Care Provider is developing and growing their relationship with Organized Labor - it also has a Labor Liaison working in the Albany Region.

“We ‘needed to have one to understand the real issues in Albany in order to do a better job’ (serving Organized Labor).  ‘So, we took a page out of our Western New York Playbook so we could (get) stronger information and feedback,’” said Dr. Edbauer, who relies on his three-member Labor Team here in Western New York for in-put.

And, Highmark/BCBSWNY continues to be the title sponsor for the Labor’s Night at the Races - run by the Niagara-Orleans AFL-CIO Central Labor Council and the United Way of Greater Niagara, which annually raises money to help fund agencies that helps Working Families in need throughout the course of the year, and has been the sponsor of a major Labor Picnic that follows the annual Labor Day Parade in South Buffalo - which is coordinated by the Buffalo AFL-CIO Labor Council and supported by the Western New York AFL-CIO Area Federation.

In addition, the Unionized Health Care Provider is planning to resume a major meeting that it holds with area Labor Leaders - a yearly event that had been put on hold the last couple of years because of the Coronavirus Pandemic, to answer their questions about the changing face of health care and to present them with information on emerging trends that will impact their Memberships in the Public and Private Sectors, as well as in the Building Trades.

“‘We’ve made a commitment to be a sponsor of that event, but also a broader commitment to the community - it is part of our Labor DNA.’  ‘We are so fortunate to have such a strong relationship (with the Western New York Labor Movement) and we look forward to growing that relationship,’” Dr. Edbauer previously told WNYLaborToday.com.