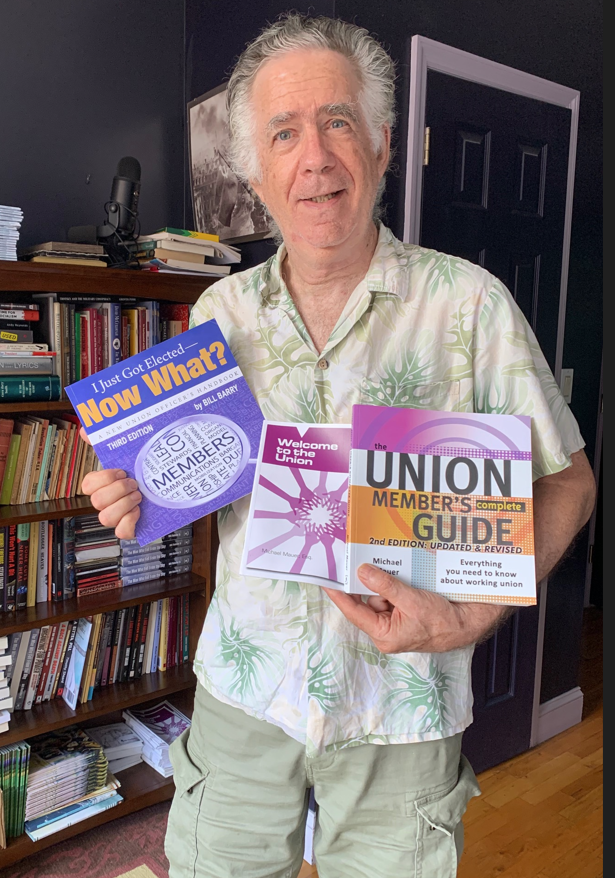 WNYLaborToday.com Editor’s Note: Pictured above, Tim Sheard - the owner of Union Book Publisher Hardball Press and Little Heroes Press in New York City, was so impressed with the young Union Activists who are Unionizing Starbucks Stores across the United States that he wants to help them better understand Labor Unions and how to better utilize what they offer as the Baristas head to the bargaining table to negotiate their first contracts.  Sheard is seeking donations from those in the Labor Movement and from Friends of Labor to help cover the cost of publishing and mailing out 400 books and 1,000 pamphlets to those young Workers across the country.  (Photo Proved By Tim Sheard)

(NEW YORK CITY) – Tim Sheard, who owns and operates the Union Book Publisher Hardball Press and Little Heroes Press in New York City, came away so impressed with those young Workers who are Unionizing Starbucks stores across the U.S. that he wants to help the newly-Unionizing Baristas educate themselves about the inner workings of Labor Unions so they can take full advantage of what they offer as many head to the bargaining table to negotiate first contracts.

That’s why he’s asking the Labor Movement and Friends of Labor to help him accomplish that goal by donating as little as $11 each so he can begin sending a total of 400 books and 1,000 pamphlets to the newly-Unionized Starbucks Workers.

The three are titled, individually as: Welcome to the Union; Union Member’s Guide; and I Just Got Elected… Now What?

“We ‘need to raise ($2,300) to get it done and right now we’ve raised a little less than one-third of that’ (about $700),” Sheard told WNYLaborToday.com during a telephone interview. 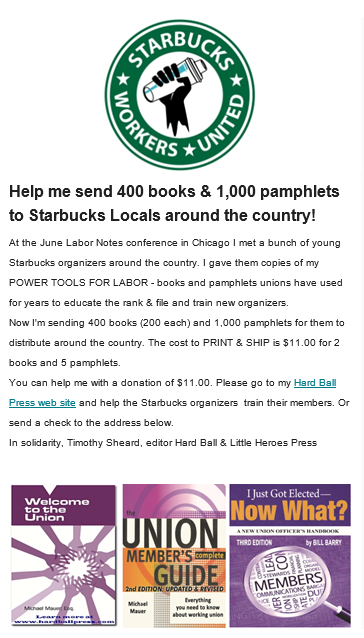 Sheard, whose run his Union Book Publishing Company since 2005, recently met a number of the young Baristas in Chicago while attending a Labor Notes Conference.

“They were from Boston, Buffalo (where the movement to Unionize Starbucks Stores started in 2021) and Philadelphia.  I gave them some of the books ‘and they were thrilled.’  They’re young and ‘you know this is about Labor Solidarity.’  They’re ‘new’ to the Labor Movement ‘and they need to know how to deal with all the issues (they will face), from handling a difficult boss to infractions of the contract to knowing their workplace rights.’  ‘It’s so important for them to know this because it will give them even more confidence going in.’”

Sheard tells WNYLaborToday.com he’s hopeful this effort with catch fire within the Labor Movement and that either a large national or regional Union, or a Friends of Labor corporate sponsor, will come through so he could send out as many as 10,000 books in the not too distant future.

Over the years Sheard and his Hardball Press/Little Heroes has published more than 40 books written by Union Members who had “good stories to tell” and has also published within that number children’s book with a Labor theme that he also believes should be widely circulated by Unions and their Members, including Teachers Unions.

“This has been a ‘Labor of Love’ for me,” he said.  “I retired nine years ago as a Nurse and ‘I believe in this effort.’  ‘I ‘m also proud of working with Union Members and helping them publish their’ Union stories.  ‘In fact, I am especially proud of that fact.’”

For More Information On How You Can Help With This Effort & More On Hardball Press, Go To: http://hardballpress.com/index.html 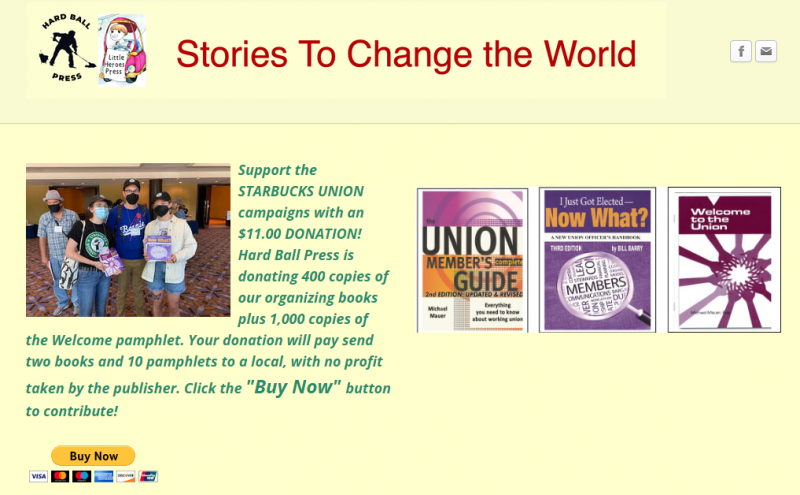