New CWA Local 1133 President Carrie Dilbert: Growing Up In A Union Family Taught Her To âStand Up For The Underdog,â Now The RN Heads A Union Of 2,000 Caregivers Who Won A High-Profile Contract Battle At South Buffaloâs Mercy Hospital 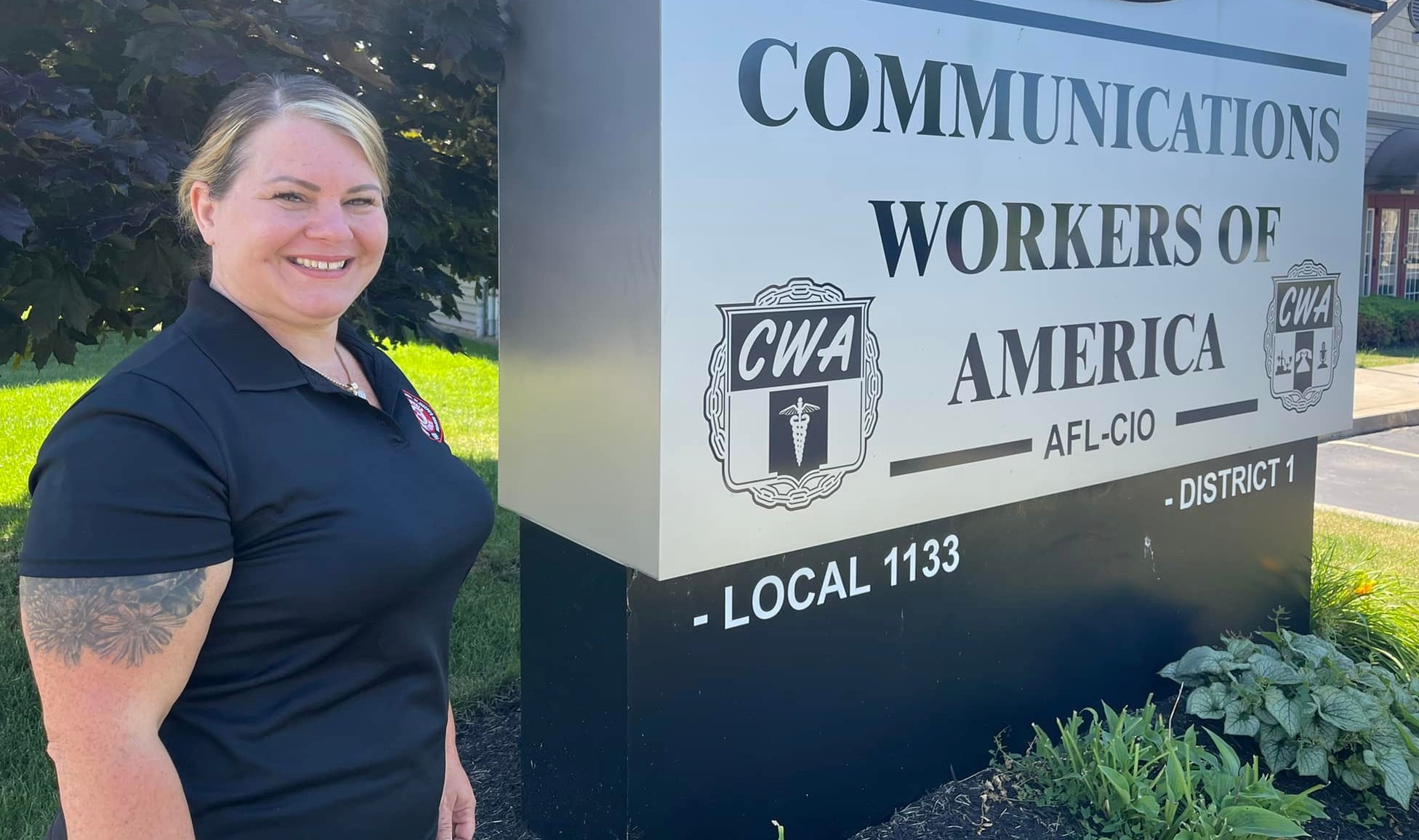 WNYLaborToday.com Editor’s Note: Pictured above, new Communications Workers of America (CWA) Local 1133 President Carrie Dilbert strikes a pose outside her Union’s Elk Street Headquarters in Buffalo.  Speaking with WNYLaborToday.com, Dilbert - who said she learned the lessons of the Labor Movement while growing up in a Union Family, credited her Father for instilling the values of what a Union can do for a Worker while she was growing up: ‘He ‘truly is my inspiration - not only to be a genuine person, but to be a strong’ Union Advocate.”  (WNYLaborToday.com Photo)

(BUFFALO, NEW YORK) – Dennis Evoy is Carrie Dilbert’s Father - a very proud Poppa who’s more than happy to talk about his Daughter, the new President of Communications Workers of America (CWA) Local 1133 - a Union of Caregivers that won a major and very high-profile 2021 contract battle at Mercy Hospital in South Buffalo.

“Our ‘whole family is proud of her.’  ‘I’m getting tears and goosebumps’ (talking about her),” Evoy, a retired Union-represented Scooper who worked Buffalo’s Grain Mills for 20 years, told WNYLaborToday.com.  “‘Ever since she was a little kid, she was always for the underdog, so this (Dilbert becoming President of a CWA Local) doesn’t surprise me one bit.’”

Evoy, a single Father who raised four daughters, said Dilbert grew up in a Union Family with her Mother a Member of the Laundry Union, her Uncle a Boilermaker, a Brother who was a Plumber and a Sister who worked for the telephone company, but was also CWA-represented.

“I ‘thought she would grow up to be a Social Worker, but she learned the Union was good for everyone and I just wish more (Workers) would join them.’  ‘They give you a voice,’” he said.

Said Dilbert - whose husband, Derrick, had been a Member of the CWA while employed as an Equipment Technician when he worked at Mercy Hospital, said:  “Our family ‘lived in one of the most prideful, Union-driven neighborhoods’ (in Buffalo), the Old First Ward.  My Father ‘was born and raised in that very same neighborhood and has instilled so many values in me.’  ‘He taught me - most importantly, is to keep God close, always care for others and to stand up for what’s morally and ethically right - especially when it comes to the Labor Movement.’  ‘He truly is my inspiration - not only to be a genuine person, but to be a strong’ Union Advocate.” 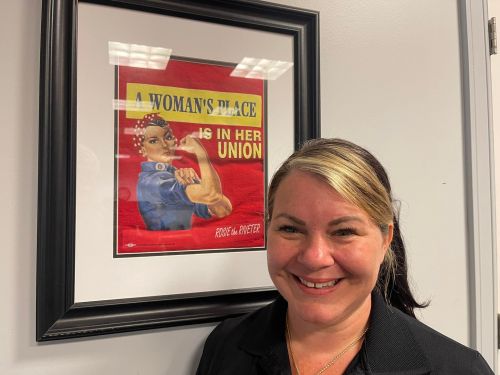 It would appear Dilbert, who took the office of Local 1133’s Presidency in January (2022) after former President (and good friend) Jackie Ettipio decided to step down to go in a different direction, not only learned the lessons of her youth very well - but is using them today to guide her Union of more than 2,000 Members, 1,700 of whom are employed at Mercy Hospital and another 400 at Kenmore Mercy Hospital.

She’s been a Registered Nurse (RN) since 2008 and a CWA Member for 15 years.  She got involved in bargaining contracts with her Union back in 2016, served as a Stewart for four years while working at Mercy Hospital in South Buffalo, and then became Vice President in January 2021, just months before all hell broke loose in South Buffalo.

In November (2021), a high-profile, widely reported on 35-day Strike at Catholic Health Systems’ Mercy Hospital in South Buffalo finally came to an end and Local 1133-represented Caregivers walked back through the front doors of the hospital, armed with a groundbreaking four-year contract whose aim was to dramatically increase Staffing Ratios and featured a commitment to work with management to attract new hires to fill 400 open positions.

And Dilbert, as a Union Leader, found herself smack dab in the middle of it all.

“We ‘showed what we could accomplish through unity and strength.’  ‘We really had to depend upon one another and it was our strong and compassionate Union Leadership that kept that strength going,’” she said at the Local’s Offices on Elk Street in Buffalo.

During the Mercy Hospital Strike, the CWA received an amazing amount of support, from the Western New York Labor Movement and its many individual Unions whose Members and Representatives walked the line, shoulder to shoulder, with the Nurses to all levels of the political community - local, county, State and Federal, all of which Dilbert says her Union is extremely thankful for.

But it was a prayer service outside the South Buffalo Hospital that has stayed in her mind, where those in attendance marched around the hospital to honor those patients and Caregivers who lost their lives during the COVID-19 Pandemic.

“‘Every Labor Union showed up to support us (that night).  ‘It was incredible to see how much people cared about us,’” said Dilbert, adding:  “We all came together with one purpose: patient safety and the care we provide for ‘our’ community.  The ‘bottom line’ (at the hospital should) ‘not be about’ money or wages and benefits.  ‘We live (to care) for our family and friends.’’”

“I am ‘extremely proud’ of our Members,” she continued.  “They ‘continue to carry on and perform their duties and keep their heads held high with smiles on their faces.’  Our ‘Mercy Family is more than just a connection.’  The labor is ‘intense.’  ‘I cannot tell how much I care about these wonderful people and to see how committed (to their profession) they really are.’”

While the CWA was victorious in its fight for a new contract, Dilbert said it has not been easy getting the Catholic Health System to follow through on the contract’s agreed-to language.

Nonetheless, she is continuing to try to work with management to deliver on promises made in the contract – especially after the creation of a joint Retention Committee, a Staffing Committee and a Clinical Staffing Committee.

“We’re ‘trying to build a culture within Catholic Health.  ‘We are really trying to work together on things’ (such as understaffing), ‘but it has come to a point where we have to hire more people.’  ‘Unfortunately, there are Members who are retiring as they hire’ (new Staff).  There are (240) open RN positions at the hospital (right now).  ‘That’s why we’re appreciative of recent bonuses (management has made available) for new hires, but our Members are frustrated.’”

Looking forward, Local 1133’s current contract with South Buffalo Mercy Hospital runs out in 2025 and Dilbert is already focused in on what she and CWA Leadership and its Membership will be focused on before its time - once again, to negotiate a new agreement.

“We ‘want to change the culture within Catholic Health where we have a good working relationship and our Members are valued.’  ‘I really want that more than anything,’” she said. 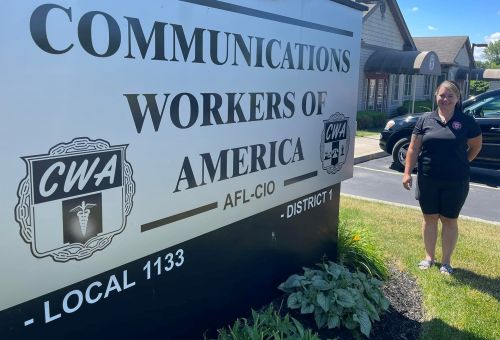