Three Other Facilities Where Workers Originally Planning To Strike Resolved Their Disputes Over The Weekend, Reaching Agreement On A $15 Minimum Wage & Other Improvements - As Such, 1199 SEIU Withdrew The Strike Notices For Those Facilities 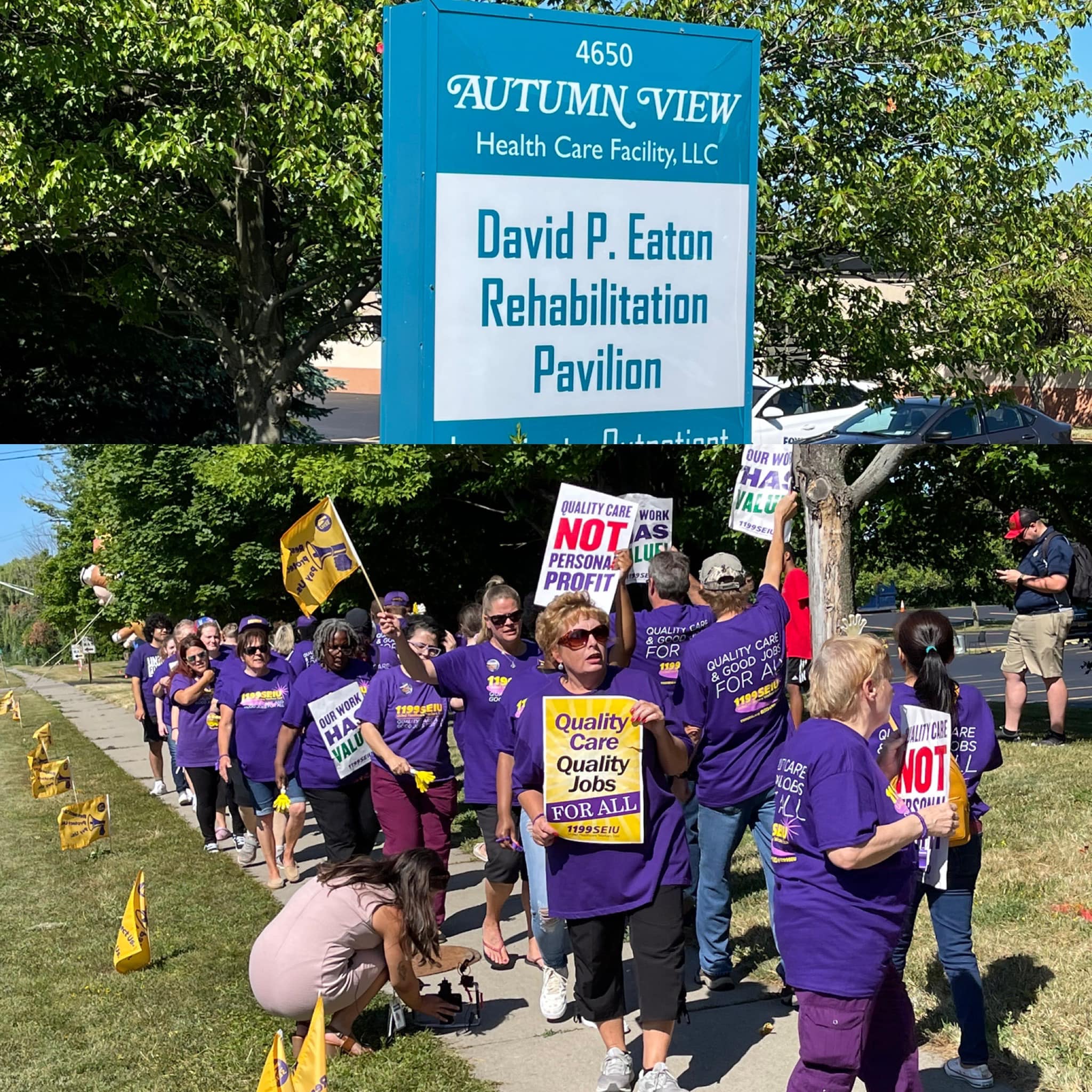 WNYLaborToday.com Editor’s Note: Pictured above and throughout this Labor News Report, 1199 Service Employees International Union (SEIU) Healthcare Workers East-represented Caregivers, who are employed at the Autumn View Health Care Facility in Hamburg, conduct a one-day Strike to call attention to the facility’s understaffing problems and low wages.  The Hamburg Nursing Home is one of a total of nine Buffalo area facilities that are being struck by 1199 SEIU Members over a two-day period.  (WNYLaborToday.com Photos)

With low wages and Staff turnover of more than 50%, Workers are demanding that for-profit out-of-town owners invest in recruitment and retention to staffing and resident care. 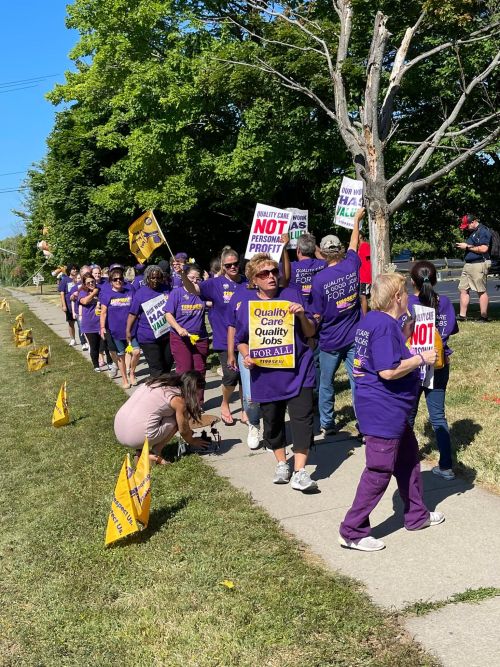 The public job action has already had positive results as 1199 SEIU Representatives announced three of 12 facilities where Workers originally planned to Strike had resolved their wage dispute over the weekend, reaching agreement on $15 Minimum Wage for Service Workers, wage scales for experience and higher starting rate of pay across all job titles.

As such, 1199 SEIU withdrew the Strike notices for those three facilities. 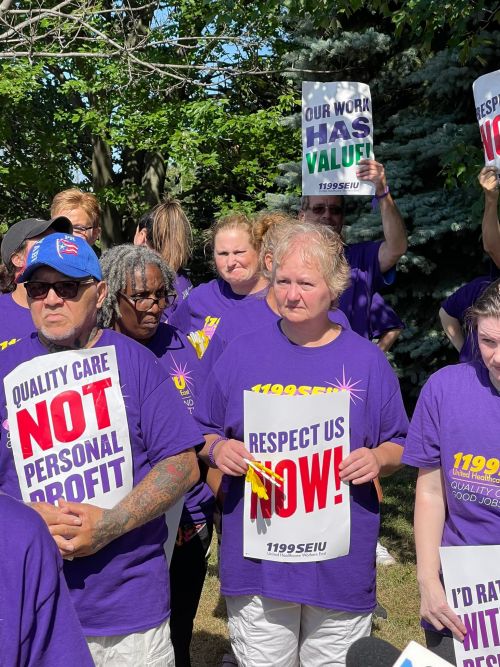 “In (1199 SEIU’s) Western New York History, ‘this is the first time that we have had so many actions occurring at the same time.’  ‘Maybe those employers saw the light,’” offered Grace Bogdanove, who serves as 1199 SEIU Vice-President for the Western New York Nursing Home Division, to WNYLaborToday.com at the Autumn View Health Care Facility in Hamburg as 1199 SEIU-represented Caregivers walked the Strike line.

“We ‘need to recruit and retain’ Workers.  If a for-profit employer ‘cares, they can do the right thing.’  (If not, 1199 SEIU-represented Caregivers) ‘could vote to go out on a longer Strike.’  We hope these employers ‘do the right thing’ as the others have,” she added. 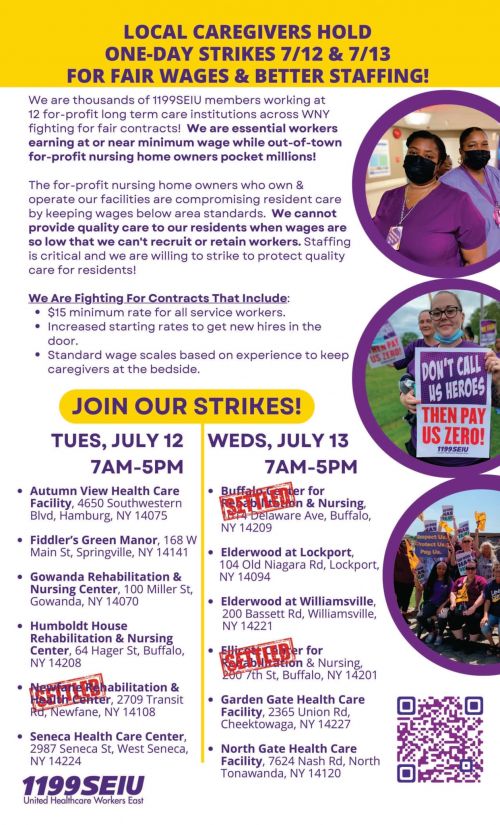 1199 SEIU Reps also said the Union has received counter proposals from some of the remaining nine facilities in what they say is a clear effort by some employers to settle the wage disputes.

Both sides are working diligently to try to reach agreements, Union Officials said. 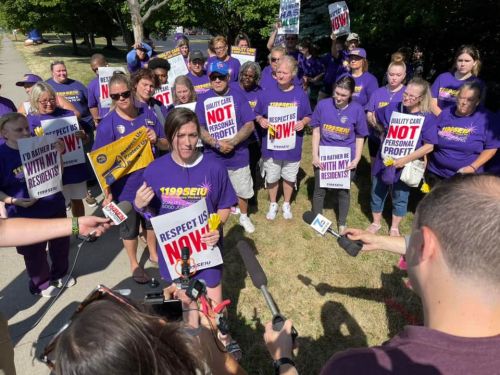 The Unionized Caregivers say wage improvements are needed within all four ownership groups (covering the nine facilities) to retain experienced Workers to care for residents, but are also needed to recruit new Workers to help with what they describe as critically understaffed facilities.

“I’ve ‘been there nine years and I don’t even make ($15) per hour,’” said Donna Gregory, a Certified Nurse Assistant employed at Garden Gate in Cheektowaga.  “Its ‘tough and it hurts.’  ‘It makes me feel that I’m not worth anything, but I stay for my residents because I love what I do.’”

“We are ‘short-staffed’ and ‘this all makes me feel so disgusted and sad.’  Some of the kitchens ‘are working with only three people and there should be at least six or eight,’” said Rebecca Pettis (pictured below), a Cook who’s worked at the Autumn View Health Care Facility in Hamburg for 31 years.  “We ‘used to be a family, but when we are short, we have to work harder and miss our breaks just to get residents their food on time.’” 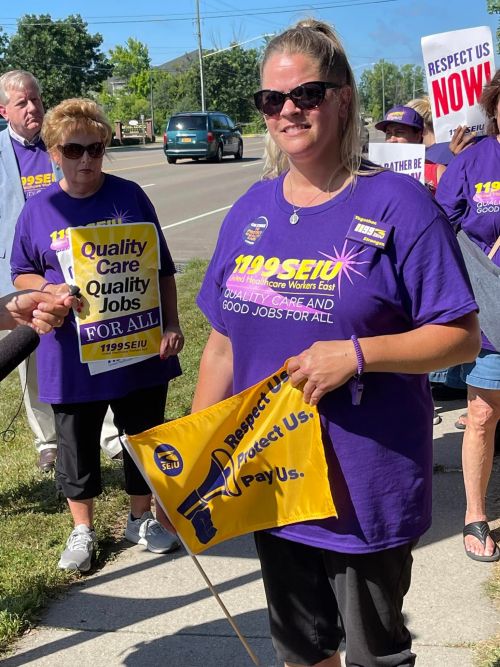 Considered an Essential Worker during the Coronavirus Pandemic and subsequently hailed as a hero, Pettis responded as such when asked by WNYLaborToday.com whether she feels like a hero now: “I ‘feel like a hero, but (the nursing home’s management) doesn’t.’”

The Union has requested a Federal Mediator join negotiations after McGuire made no movement during bargaining.

McGuire declined to have a Federal Mediator join negotiations in advance of the one-day strikes that were scheduled for this week, 1199 SEIU Representatives said.

Meanwhile, Caregivers say the continuity of care from long term Caregivers is key.

“In-house people care more for the residents than people coming from outside who don’t know them,” says Kaylyn Carney, a Certified Nurse Assistant employed at Fiddler’s Green in Springville.  “The people in here are like my family and I treat them as family.  People just don’t know them and come in to just do a job and go home.  This is my life, I take care of people for a living.”

1199 SEIU United Healthcare Workers East - whose mission is to achieve quality care and good jobs for all, is the largest and fastest-growing Health Care Union in America, represents more than 400,000 Nurses and Caregivers throughout the States of New York, Massachusetts, New Jersey, Maryland and Florida, and in Washington, D.C.

For More On This Labor News Story, Go To: www.nursinghomestaffingaccountability.com/