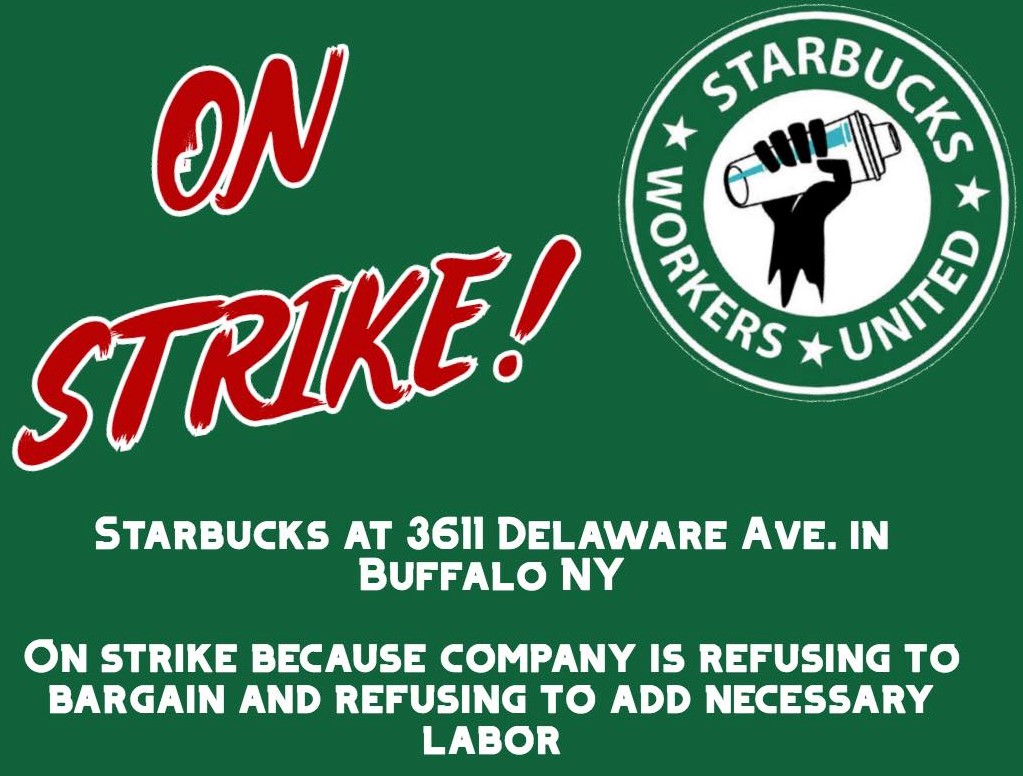 (BUFFALO, NEW YORK) - On Monday (July 11th), the Federal Government will begin prosecuting Starbucks for more than 200 alleged violations of Federal Labor Law committed in Buffalo and Western New York as part of the company’s Anti-Union efforts since August 2021.

After a six-month investigation, Region 3 of the NLRB issued a sweeping complaint charging Starbucks with numerous unlawful acts, including firing Workers for Union activity, omnipresent surveillance, closing stores to scare Workers out of organizing, and threatening Starbucks’ Workers with the loss of benefits if they supported the Union.

Immediately after Starbucks Workers United filed three petitions on behalf of Starbucks Workers at stores on Elmwood Avenue in Buffalo, on Genesee Street in Cheektowaga and Camp Road in Hamburg, Rossann Williams – who served as Starbucks’ President of North America at the time, led an army of out-of-state executives, managers and HR personnel into Buffalo where they waged a relentless war against their own Workers, SBWorkersUnited charge.

Over 100 such individuals carried out the company’s plan to thwart their Workers’ collective action by any means necessary, Union Representatives further said, adding that they failed, and - in the process, a movement was born.

Starbucks Partners say they are relieved justice is finally being carried out for what they had to endure to exercise their fundamental right to organize.

Lexi Rizzo, a six-year Buffalo Starbucks Partner, said: “No Worker in this country should have to go through what we the Buffalo Starbucks Partners have endured.  Our company professes to be progressive and now the public will see how hollow those words are.  Frankly, Starbucks should be ashamed of its conduct in Buffalo and all over the Nation as Howard Schultz seems willing to subvert the company to retain complete control.  The good news is Partners around the Nation are holding him and the Board of Directors accountable.”

The hearing will be held at the Robert H. Jackson U.S. Courthouse in Downtown Buffalo on Monday.

The trial is open to the public to attend, but will not be broadcasted virtually.

Meanwhile, last week, Starbucks Workers at the Sheridan and Bailey store in Buffalo went on a one-day Strike in response to Starbucks cutting Workers’ hours and other union-busting tactics.

The Workers made the decision to Strike due to the company refusing to bargain a contract and for retaliating against Employees by refusing to add Staff until they bargain, Union Representatives said.