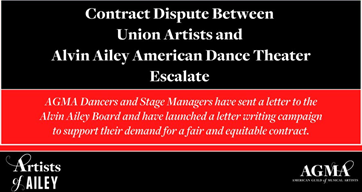 (NEW YORK CITY) – A contract dispute has escalated between Union-represented Dancers and Stage Managers who are Members of the American Guild of Musical Artists (AGMA) and the Alvin Ailey American Dance Theater.

With the current Collective Bargaining Agreement between the AGMA and Alvin Ailey American Dance Theater having expired on July 1st (2022), the AGMA Ailey Negotiating Committee - made up of the Artists of Ailey - has been at the bargaining table for the past several weeks, fighting for a fair and equitable contract.

The Artists have made multiple detailed presentations to management in support of their request for a fair contract.  In response, the AGMA says management has told the Artists that their asks are too costly and unworthy of its resources.

The Alvin Ailey American Dance Theater is one of the most successful dance companies in the U.S., boasting a healthy balance sheet and an annual budget of approximately $40 million, Union Officials said.

Despite the financial health of the organization, Alvin Ailey spends a comparatively minuscule fraction of its overall budget on the Dancers and Stage Managers who make up the first company and carry out the primary work and mission of the organization.

While Alvin Ailey Artists have significantly more performances each year than Artists at peer companies, their Artists are compensated well below the national standard in terms of guaranteed work weeks, salary and overall career earnings, their Union said.

Meanwhile, the compensation for Alvin Ailey’s highest-paid executives stands at the very top of the market in the dance world, they add.

The Artists have made several necessary, essential and common-sense asks of management, all of which have been refused, the Union said.

The Artists are asking for their guaranteed work weeks to be increased from 35 weeks to 43 weeks, so that they have time to safely rehearse repertoire and keep their bodies in condition during a long and grueling season.

The Artists are also asking for salary increases to bring their earnings in line with other Dancers and Stage Managers at leading companies.

At the table, the Artists have repeatedly highlighted the structural inequality built into Alvin Ailey’s business model.

Alvin Ailey’s Artists are primarily BIPOC and they are compensated well below other peer dance companies, whose rosters happen to be made up of a majority of White Dancers.

Alvin Ailey’s primarily White senior management, however, is compensated at or above industry standard, the Union said.

To Continue Reading This Labor News Report, Go To: www.musicalartists.org/contract-dispute-between-union-artists-and-alvin-ailey-american-dance-theater-escalate/?fbclid=IwAR2dR4BTvf8qHfBlALIzJdMvlxPjl-sebfWE3zUd7yivA1pR2B_1wV-2C_w&link_id=2&can_id=d28a0e75022b91d73fc95bc86b686390&source=email-union-matters-june-24-2022&email_referrer=email_1591166&email_subject=union-matters-july-1-2022