âSo, You Want To Build a Unionâ - Here Are Some Expert Tips From Retired, 42-Year Veteran Union Leader Ralph Palladino: âTalk To Members And Find Ways To Get Them Involved. It Can Be Done!â 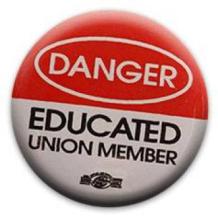 LaborPress Editor’s Note: Ralph Palladino is a retired 42-year veteran Union Leader from Clerical Administrative Local 1549 DC 37/American Federation of State, County & Municipal Employees (AFSCME) in New York City.  For 21 years he served as Local 1549 Second Vice President, overseeing Political Action/Advocacy, Shop Steward Training and Internal Organizing.  He played a key role in organizing Metro Plus HMO Workers into Local 1549.  He is now a Member of the DC37 AFSCME Retirees Association and has published articles in various publications including The New York Daily News, The Staten Island Advance, The Asbury (N.J.) Park Press, The Los Angeles Free Press, The Coaster, the Mayor of New York’s website, LaborPress and Labor Notes on issues of politics, racism, immigration and Labor.  He was Editor of the Local 1549 “Members in the Know” and “Shop Stewards in the Know” newsletters.  The following comes courtesy of Palladino’s “Union Strong” pamphlet - Click here to view it in its entirety.

Are you interested in building the Union at your work site?

That is exactly what Shop Stewards and Activists are supposed to do.

As an Activist/Shop Steward/Elected Union Leader for over 40 years, I have some ideas I would like to share on building the Union.

I became a Shop Steward at Bellevue Hospital in 1979.

I was a CETA Worker.

CETA was a government jobs program that the Federal Government wanted to eliminate.

The city wanted to lay us off.

At the same time, there was a fight to keep hospitals from closing which was another threat to my job.

I immediately became involved in both fights.

The first thing I did inside the hospital was to distribute literature and circulate a petition.

I also organized all CETA Workers into a Work Site Committee.

We worked as a team, joining a city-wide coalition and DC 37 to stop the layoffs.

We were part of successful efforts to stop both layoffs and hospital closures.

As a result of these fights, Members saw me as an Activist.

I ran for Shop Steward after my first year of employment.

The majority of the Shop Stewards at that time did little to defend Members from management abuses.

When I became a Steward, I chose a different path.

Members prefer Stewards who are not afraid of management.

They know these Stewards stand with them through thick-and-thin and respect that.

You cannot win all battles, but you get respect when you try to do so.

Too often, at that time, members would hear, “there is nothing I can do” from Stewards and Staff.

There always is something you can do, even if it is just offering your best advice.

To Continue Reading This Labor Column, Go To: www.laborpress.org/so-you-wanna-build-a-union-here-are-some-expert-tips/