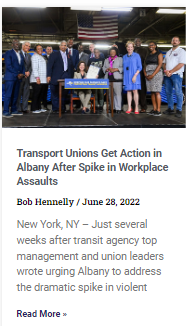 Under the legislation signed on Monday (June 27th), attacking Transit Workers on the job is a second degree felony, punishable by up to seven years in jail.

The new law now defines Transit Workers to include Station Customer Assistants, Ticket or Revenue Collectors, Maintenance Workers, Repairers, Cleaners and their Supervisors, who are not protected by existing law.

Boosters of the legislation estimate an additional 11,000 bus and subway lines, as well as Commuter Rail Service Employees on the Long Island Rail Road and MetroNorth, are also now covered.

The previous law was limited to mass transit job titles like Subway Train Operator or Conductor.

“During the pandemic, our Transit Workers were heroes, showing up while everyone was staying home - putting not only their health and the health of their families at risk, but also risking their lives as subway crime increased,” Governor Hochul said at the signing ceremony.

“New York’s Transit Workers have always been there for us and now it is our job to be there for them.  No one should be subjected to physical violence or harassment in the workplace and today we are taking an important step in protecting the Men and Women who keep our subways and buses running,” the Governor said.

“Transit Workers come to work to do a job, not wind up in the emergency room,” Transit Workers Union (TWU) Local 100 President Tony Utano said. “We deserve respect from riders and from the law,” adding that the law was “a step in the right direction.”

“Prosecutors and judges must now do their job and hold people accountable for their actions,” Utano said.

“As unprovoked, violent attacks against MTA (Metropolitan Transportation Authority) Employees continue to rise, it is imperative that our MTA Supervisors receive the same legal protections as every other MTA Employee,” wrote Mike Carrube, the President of the Subway Surface Supervisors Association, in a statement to LaborPress.

“After years of vigorously lobbying to include our Members in the Assault Bill, I am deeply grateful to Governor Hochul for signing this critical legislation that finally includes my Members and will send a powerful message to their assailants that they will be prosecuted with a felony charge for their crimes committed against us,” Carrube further wrote.

Back in May, following a spate of assaults, including the Sunset Park subway mass shooting in which 10 people were wounded, MTA Chair and CEO Janno Lieber - as well as other transit agency bosses joined with a coalition of Union Leaders to write Senate Majority Leader Andrea Stewart-Cousins and Assembly Speaker Carl Heastie to urge them to address the troubling trend.

While assaults on Transit Workers had been a serious issue before COVID, it got even worse during the pandemic when the public was required to comply with public health protocols - including wearing a mask.

According to the MTA, in 2021 there were a total of 117 physical assaults and 2,380 incidents of Employee harassment reported.

The increased incidence of workplace violence occurred as thousands of Workers in the Transportation Sector were sidelined by the killer virus which took the life of 170 MTA Workers.

To Continue Reading This Labor News Story, Go To: www.laborpress.org/transport-unions-get-action-in-albany-after-spike-in-workplace-assaults/