These Animal Health Care Workers - Who Take Care Of Cats & Dogs At The Orchard Park Veterinary Medical Center Just Outside Buffalo, âWant Improved Staffing, A Voice On The Job & To Make Their Workplace More Fair & Justâ 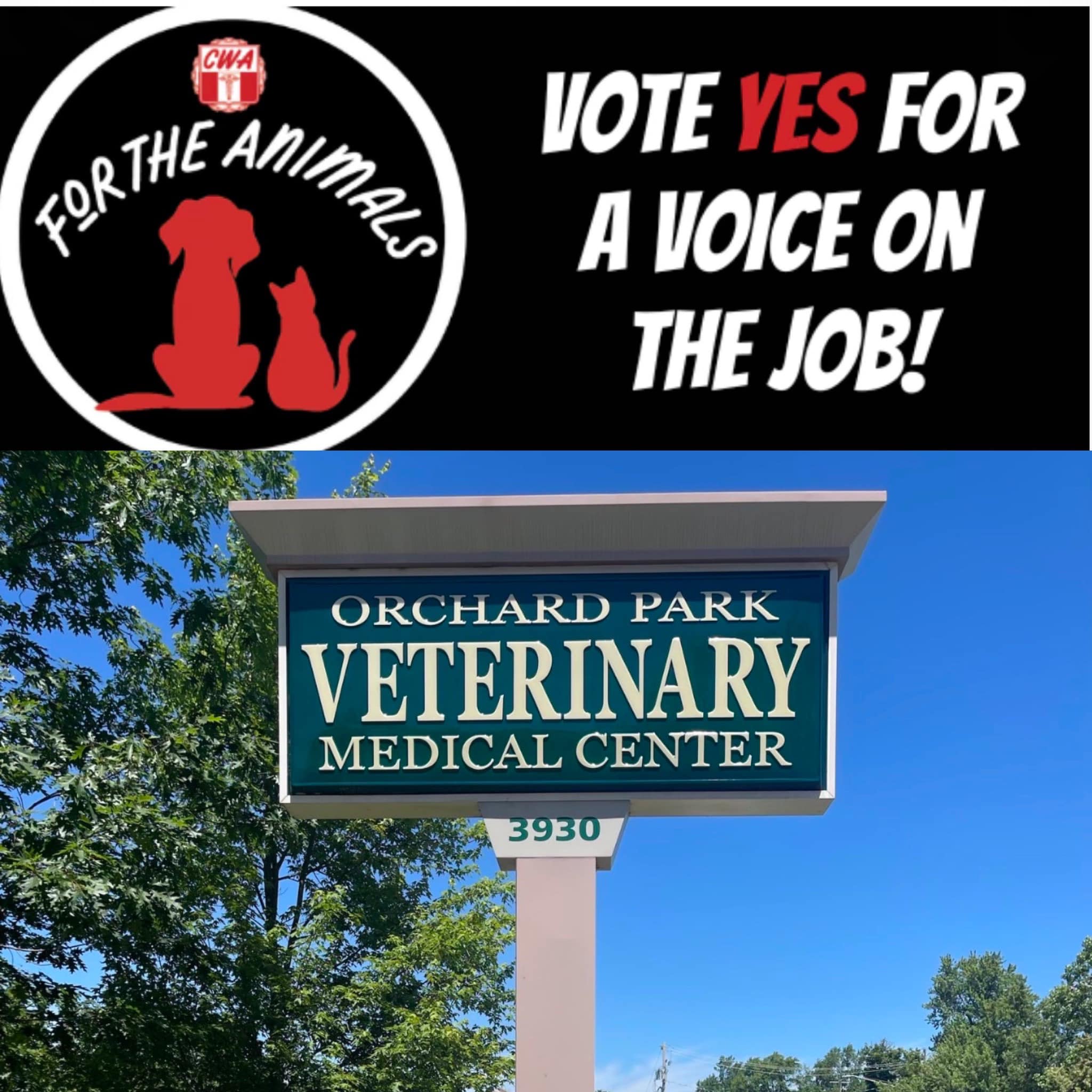 WNYLaborToday.com Editor’s Note: Pictured below, Mary Nowicki (on the left) and Maria VanCuren (on the right) will be voting in a Union Election to be held in mid-July that will impact a group of 130 Veterinary Technicians and Assistants and Clerical Workers employed at the Orchard Park Veterinary Medical Center, located just outside Buffalo.  The Animal Caregivers want to Unionize their workplace with Communications Workers of America (CWA) Local 1168.    (CWA Local 1168 Provided Photo) 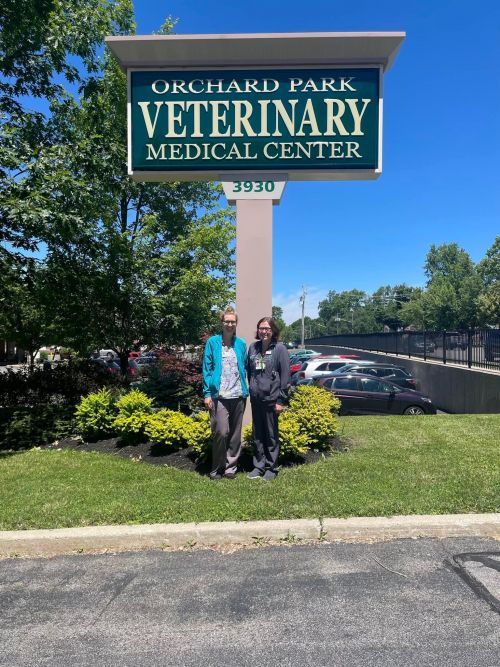 (ORCHARD PARK, NEW YORK) – Communications Workers of America (CWA) Local 1168 represents a variety of Health Caregivers who are primarily employed at a number of hospitals and medical facilities in and around the Buffalo area, Workers who are charged with administering to human patients.  But now, the CWA Local is looking forward to a unique Unionization vote that will be held in mid-July which could bring 130 new Members aboard - Workers who take care of cats and dogs at the Orchard Park Veterinary Medical Center.

These Animal Caregivers, so to speak, want to Unionize over the same problems that face their human Health Caregiver counterparts - improved staffing, a voice on the job and to make their workplace more fair and just.

On July 13th, a Union Election is scheduled to be held – overseen by the National Labor Relations Board (NLRB), that will impact Veterinary Technicians and Assistants and Clerical Workers employed at the full-service Medical Center/Animal Hospital that’s located just outside Buffalo and offers an array of services, 24/7.

WNYLaborToday.com attended an Organizing Meeting with the Animal Caregivers that was held last week by Local 1168 Reps and then interviewed three Orchard Park Veterinary Medical Center Employees, who explained why they want a Union in their workplace.

“Our patients (the dogs and cats they treat) ‘are suffering because there is not enough’ Staff,” Client Service Rep and Veterinary Assistant Bryanna Ely, who’s worked at the Orchard Park Veterinary Medical Center for the past two years, said.

“‘I do love my job, I just wish it was better,’” Ely continued.  “We were ‘essential’ (having worked through the Coronavirus Pandemic), ‘but we need better pay’ (too).  ‘We’ve really come together as a group’ (during the Unionization effort) and we’ll all go down (on July 13th to vote for a Union in a NLRB-administered Election) and win.”

Mary Nowicki, who’s been employed as a Veterinary Technician at the Orchard Park Veterinary Medical Center for the past three years, said: “We ‘need better staffing and (Employee) retention.’  We serve as the ‘central hub of vet care.’  We provide things like anesthesia and chemotherapy (for their animal patients).  We’re ‘like’ RNs (Registered Nurses, but we also) clean teeth and give chemo, perform CPR and take orthopedic x-rays.’  ‘Now we can have more of a voice (in their workplace) and we (the center’s Employees) have more power that we realize.’  ‘We need this.’  ‘We don’t get the recognition.’”

Maria VanCuren, a Licensed Vet Tech who’s worked at the Orchard Park Vet Medical Center for nearly 13 years, was the Worker who initiated the call to Unionize in her workplace.

“I started this (back in April),” she said.  “Over the last year and a half during the pandemic, burnout (among Employees)’ has gone up.’  I look at Veterinary Industry chats (on the Internet) across the country ‘and you see how patient loads have been doubling.’  ‘We were considered essential (during the pandemic) and, yes - we were called heroes.’  But when you have (42) pets in an ICU at times ‘and only two’ Techs ‘and half’ the assistants ‘you need, they wind up having to take care of all of them.’  ‘Some need (scheduled) medications.’  ‘Some (wind up) in their own filth.’  ‘We’re doing the best we can, but this absurd.’  ‘That’s why I’m advocating for my Co-Workers.’  ‘Sometimes I break down crying.’  ‘I feel so defeated.’  ‘It seems (management) cares more about the bottom dollar.’  Staffing’s ‘important because you have to take care of (people’s) pets appropriately.’  ‘We’re doing everything a human hospital does.’  ‘The focus has to be on the pets - the number one priority is on the pets, but (management (isn’t) hiring (more) Staff.’  I was thinking that ‘I can’t keep working here because we’re not getting the recognition.’  I thought to myself, ‘I only wish we could Unionize.’  Then I had a conversation (with a CWA Rep) on Social Media and she said, ‘You can.’”

It appears management at the Orchard Park Veterinary Medical Center is not welcoming their Employees’ wishes to Unionize - to the point where CWA Local 1168 Reps have now filed as many as eight Unfair Labor Practice (ULP) Charges with the NLRB “for all different charges,’ according to Union Officials.

In addition, the Employees talked about management’s use of Captive Audience Meetings, with many saying they are choosing to speak out against the company’s Anti-Union rhetoric and are setting the record straight on what a Union can do for Workers inside their workplace.

“They have ‘surveilled’ people, ‘ripped announcements off the walls,’ ‘changed’ (Employees’) schedules - ‘they are trying to create divisiveness and they are trying to prevent you from having a voice at work,’” added CWA Local 1169 Organizer Ann Converso.

“You’re ‘working to improve patient care’ and the Union ‘works for you - ‘you’ are the Union.  ‘You’ will develop a pay scale ‘and the goal is to raise everyone up.’  That has to be negotiated (in a first contract with management) and ‘done fairly and equitably.’  This will be ‘your’ contract, ‘with your ideas’ - ‘what you think is important.’  ‘You have to tell that you can’t bully me, you can’t make me feel scared,’” Converso told those attending the meeting.

Then, almost on cue, one of the Workers yelled out: “Thank God for you!’”

In one of their many Pro-Union responses, the Workers have been wearing red CWA Local 1168 badge pulleys on their clothing (Pictured Below/WNYLaborToday.com Photo) to show their support of their Unionization effort while they are at work. 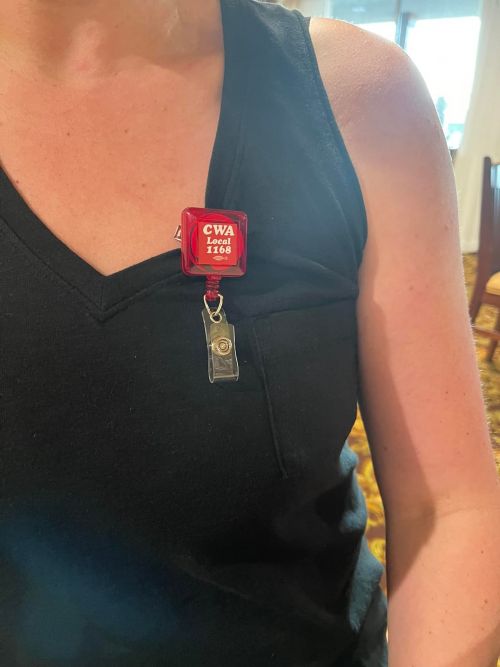 “‘You all should have goosebumps with everything that has happened from (April 3rd) to now, the sense of community you have built and the support you have for each other,’” Nowocien said.

Afterwards, Converso told WNYLaborToday.com that “it would hit a nerve” with the general dog and cat-owning public if they understood what the quality of care was for their pets was inside the Orchard Park Veterinary Medical Center, which does not offer inexpensive services.

On another front, CWA Local 1168’s Executive Board has released a letter that was forwarded by the Western New York AFL-CIO Area Labor Federation to its affiliated Member Unions, which combine to represent more than 140,000 Public and Private Union-represented Workers across the region.

It stated – publicly, that Local 1168 “stands in solidarity with the Employees at Orchard Park Veterinary Medical Center in their fight for a Union” and that the Employees “fight are our fights, which makes CWA Local 1168 a perfect fit and choice for our new Brothers and Sisters.”

The Union asked for support for the Workers and for those in the Labor Movement to call the Orchard Park Veterinary Medical Center to “tell them you are a Union Member, that you utilize their hospital, and expect the company to recognize the Employees demand to have CWA Local 1168 as their Union Representative.”

A copy of the letter and contact information for the Orchard Park Veterinary Medical Center appears below: 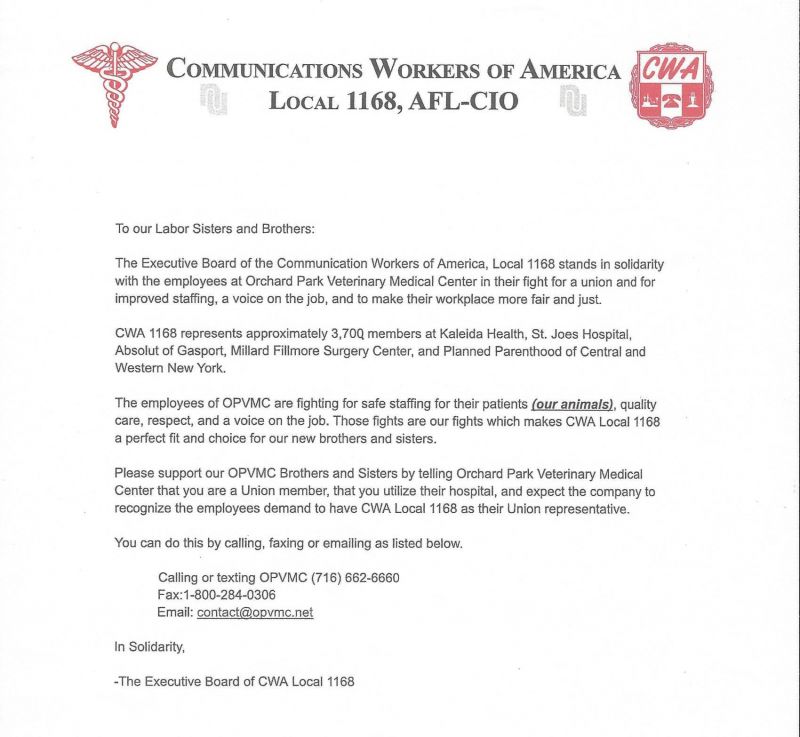 This has been talked about for many, many years. I'm glad that this is going forward. Hopefully it will help ease the stress and burnout that has caused so many Technicians and Assistants to leave. Some never return to the job they once loved and took pride in. The current owners will need to stop being deaf to the needs of the staff. Management needs to do better, but also needs to be allowed to implement positive changes. Lining the owners pockets at the cost of Employees and patients can no longer be allowed! Posted by Tom Campbell on July 1, 2022 at 5:51 pm
I would no doubt still be working there had there been a Union to fight for me in 2019. I'm so happy to see Unionization happen! FIGHT!! Posted by Stephanie on July 1, 2022 at 7:23 am
CWA 1168 really is the perfect fit for the Employees at the Orchard Park Veterinary Medical Center. The way the Employees have come together, and are already starting to work on their issues, is truly a fight to be home! I am honored and proud to be working with them and am very much looking forward to their Union representation! Thank you for your support. SOLIDARITY! Posted by Mary Nowocien on June 29, 2022 at 11:19 am